The battle for opposition supremacy is on after Prime Minister Stephen Harper set Nov. 25 as the date for four federal by-elections.

Harper called the by-elections on Sunday for Toronto Centre, the Montreal riding of Bourassa and the Manitoba ridings of Provencher and Brandon-Souris.

Toronto-Centre and Bourassa are longtime Liberal strongholds, left vacant after the resignations of former interim leader Bob Rae and veteran MP Denis Coderre. However, New Democrats are making a concerted effort to snatch the two ridings away or, at least, make significant inroads.

Both the Liberals and NDP are running star candidates in the two ridings.

The Manitoba ridings are longtime Conservative fiefdoms, left vacant after the retirement of former minister Vic Toews and backbencher Merv Tweed, and are widely expected to remain so.

But a raging controversy over the party's alleged interference in the choice of candidate in Brandon-Souris has angered some Tories and given the opposition parties some hope of scoring an upset.

The Toronto and Montreal by-elections will likely be the most closely watched, with New Democrats intent on proving they're the real alternative to the governing Tories, despite public opinion polls suggesting the NDP has sunk back into its traditional third-place slot since Justin Trudeau took the helm of a rejuvenated Liberal party in April.

The Liberals are running Chrystia Freeland in Toronto Centre. She'll be up against the NDP's Linda McQuaig. Both are former journalists and authors who have written extensively on growing income inequality, a key issue since all three main federal parties are vying to be seen as the champion of the middle class.

McQuaig was out of the gate immediately Sunday, challenging Freeland, via a You Tube video, to a debate "any time, anywhere."

"We're going to do everything possible to get her elected," NDP Leader Thomas Mulcair said in an interview, calling McQuaig "extraordinary," "amazing" and "a star."

Bourassa is one of the few Quebec ridings that didn't fall to the NDP when the so-called orange wave swept the province in 2011 and Mulcair said the NDP is "going to throw everything we can at it, starting with an absolutely exceptional candidate, named Stephane Moraille."

Moraille, an immigrant from Haiti, is a lawyer and erstwhile singer with Juno-award winning Bran Van 3000. She's going up against Liberal star recruit Emmanuel Dubourg, a former member of the Quebec legislature who is also of Haitian descent.

The Green party's chosen contender, former NHL star and deputy party leader Georges Laraque, could have complicated the Liberal-NDP showdown in Bourassa. But he stepped down last week after he was charged with five counts of fraud related to a dispute with a former business partner. He said he wants to focus on clearing his name.

Trudeau has already been campaigning in both Manitoba ridings, although the chances of knocking off the Conservatives seem slim.

"Liberals are taking every byelection seriously," Trudeau said in a statement Sunday. " I have travelled across this country and I have heard Canadians' calls for something new, something better."

Toews won Provencher in 2011 with a whopping 70 per cent of the vote, while Tweed took Brandon-Souris with a similarly impressive 64 per cent. But Mulcair predicted both Manitoba by-elections will be "three-way races" this time.

Liberals and New Democrats are hopeful that controversy over the Tory nomination in Brandon-Souris could herald an upset.

Provincial politician Larry Maguire was acclaimed as the Conservative contender after the party disqualified Chris Kennedy, a former aide to Tweed. That sparked a backlash among some Conservatives in the riding, including one who subsequently ran unsuccessfully for the Liberal nomination.

The Liberals have chosen Rolf Dinsdale, son of former longtime Conservative MP Walter Dinsdale, to take on Maguire while Cory Szczepanski, president of the Brandon Labour Council, is carrying the NDP banner.

In Provencher, the Conservatives have chosen Ted Falk, a business owner and longtime chair of the Steinbach Credit Union. Retired public servant Terry Hayward is running for the Liberals while the NDP was set to acclaim Sunday a former parliamentary page, Natalie Courcelles Beaudry.

How Tim Hudak built a Tory team he can count on
Subscriber content
October 18, 2013 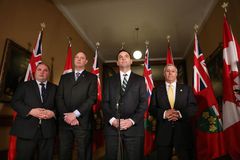 Ontario faces sixth by-election after Liberal MPP resigns
September 24, 2013
Report an error
Due to technical reasons, we have temporarily removed commenting from our articles. We hope to have this fixed soon. Thank you for your patience. If you are looking to give feedback on our new site, please send it along to feedback@globeandmail.com. If you want to write a letter to the editor, please forward to letters@globeandmail.com.
Comments