The Quebec Liberal Party is on course to form a majority government, according to an opinion poll showing the party well ahead of the Parti Québécois.

The survey, conducted by polling firm Léger, is the first extensive survey of the campaign and corroborates all the signs that PQ's campaign started faltering around the time it unveiled star candidate Pierre-Karl Péladeau and got entangled into debates about sovereignty and a referendum.

At the same time, pollster Christian Bourque, Léger's executive vice-president, said the Liberals' lead in key ridings is still thin and the dynamic of the campaign has changed, with front-running Liberal Leader Philippe Couillard under fire from all his rivals.

The adjusted results for the Léger poll:

The Quebec Liberal party is on course to form a majority government, according to a public opinion poll showing the party well ahead of the Parti Québécois.

The level of support for the PQ has dropped only marginally compared with previous polls, while Mr. Couillard's Liberals have grown at the expense of the second opposition party, François Legault's Coalition Avenir Québec.

The results are based on 3,692 respondents from a pre-selected Internet panel who were contacted between March 21 and 23. Because it was an online non-probability survey, the margin of error cannot be determined, but Léger said a traditional phone poll of the same scope would have a 1.2 per cent error margin 19 times out of 20.

Over the three days the poll was conducted, the PQ was lowest at the beginning and improved somewhat the following days. "Is 33 per cent the floor level for the PQ or not? That remains to be seen. The Jell-O hasn't set yet," Mr. Bourque said.

The election will be decided in a handful of ridings in the heartland between Montreal and Quebec City, in towns like Trois-Rivières, Drummondville or Sherbrooke.

"The numbers we have this morning would give the Liberals a majority," Mr. Bourque said. "But with one or two more points for the PQ among the francophones, if the CAQ rises a few points and holds on to a riding or two, we could have a minority government. It's still relatively tight."

The results may be seen as a reflection of PQ Leader Pauline Marois's faltering campaign, which has failed to frame the ballot question as revolving around the secular charter prohibiting overt religious symbols in the public sector.

The first part of the campaign saw both Mr. Couillard and Mr. Legault attack Ms. Marois. At the same time, the PQ went off-message when it introduced Mr. Péladeau, who raised his fist at his inaugural press conference as he stated his support for independence.

The following days were punctuated by talk about the referendum and worried CAQ supporters began defecting to the Liberals, Mr. Bourque said, calling Mr. Péladeau's gesture "the fist pump that changed it all."

PQ support among francophone voters, who decide the outcome of elections in the province, was down to 40 per cent while the Liberals were up to 30 per cent and the CAQ at 17 per cent. Francophone support was up just enough to put the Liberals in the lead in eight out of 14 regions surveyed by the Léger poll.

Yet 61 per cent of PQ supporters said they didn't believe there would be another referendum if the PQ were elected.

Close to half of those polled – 48 per cent – said the Liberals will win the election.

Ms. Marois said her party has fallen victim to a campaign of fear run by the Liberals over the threat of a referendum. "We are the victim of a leader, Mr. Couillard, who has nothing audacious to propose to the people," she told a news conference Tuesday morning. "So he's trying to instill fear in the Quebec people."

Ms. Marois said she was aware Mr. Péladeau would make a rallying cry for an independent country. "It was pertinent, and we agreed to it," she said.

Mr. Legault opened his daily news conference saying the April 7 vote had turned into a "referendum election" and a lost opportunity to debate other issues.

"Ms. Marois' petty games have led us into a situation where there won't be a charter under a majority Liberal government," he said. "And Mr. Couillard can be blamed for constantly raising the referendum issue … while he has no program, no ideas and if he is elected he will be premier by default."

With a report from Les Perreaux. 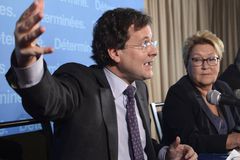 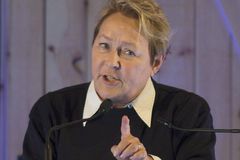