The Quebec Liberal government is proposing an ambitious belt-tightening program to achieve a balanced budget in two years.

The newly appointed Quebec Finance Minister Carlos Leitao plans to meet the zero-deficit challenge by imposing a freeze on staffing in the public sector, slashing corporate tax credits by 20 per cent and drastically reducing spending growth.

The measures were part of the Liberals' first budget, tabled Wednesday, since winning the April 7 election. The budget also includes higher taxes on alcohol and tobacco and a full retreat on a few key election promises.

"We are determined to achieve a balanced budget in 2015-2016," Mr. Leitao said in a news conference. "This is absolutely necessary. It is more than an obsession, it is an obligation after running deficits for six years."

The government is also hoping that the negotiations with its 430,000 employees, whose contract expires March 31, 2015, will also help it achieve its budgetary targets. Employee salaries and benefits represent almost 60 per cent of all government program spending.

As of March 31, the deficit was $3.1-billion, $600-million more than what the former Parti Québécois government projected in their budget last February. The Liberals forecast a $2.35-billion deficit at the end of the current fiscal year. Slow economic growth and lower revenues will make the task all the more difficult in reaching a balanced budget by the end of 2015-2016, Mr. Leitao noted. It will require wrestling spending growth to 1.8 per cent in 2014-2015 and only 0.7 per cent in 2015-2016.

Almost every program was being frozen or cutback, from protection of the French language, to the environment, to aid to welfare recipients and daycare services. But the government kept its promise to abolish the $2 a day increase in daycare rates proposed by the former PQ government. It was replaced with indexing according to the rate of growth in the cost of the program. That means that as of Oct. 1, daycare rates will rise to $7.30 per day.

Even health and education, the government's priority targets, which make-up two-third of government spending, will receive less than expected.

And this was only the first step as the Liberals promise a major restructuring of the province's public finances. The government will set up an ongoing program review committee to re-evaluate future needs as well as undertake an assessment of Quebec's taxation system.

"Without these instruments not only will we be able to be more ambitious but also be smarter," said Treasury Board president Martin Coiteux. "We aren't trying to reduce the size of government. We are trying get back our freedom to choose."

The cash-strapped government announced it will inject $293-million to boost the economy with most of the money ($235-million) going to support small- and medium-sized companies.

But that was all the money Mr. Leitao had to work with. Liberals retreated on their election promise to inject $15-billion over 10 years on a new infrastructure program. Instead it is increasing by $300-million the current Quebec Infrastructure Plan that will help increase investments to $11.5-billion for the current fiscal year.

Despite the morose economic outlook the government has kept a few cards up its sleeve to help it weather unexpected events on the road to a balanced budget.

The Liberals are also using $1.3-billion for the Generations Funds to offset the increase in the provincial debt. If the government decided against investing into the fund, the deficit would be $1.05-billion in 2014-2015 and it would record a $1.58-billion surplus the following year.

Mr. Leitao also argued that reducing the province's debt burden remained a priority for his government. As of March 31, the province's gross debt was 54.3 per cent of GDP and the debt representing accumulated deficits, 32.9 per cent of GDP. After reaching a balanced budget, the Liberals promised to use half of all surpluses to reduce the debt and the other half to cut taxes.

Opposition parties firmly denounced the Liberal budget. Parti Québécois finance critic Nicolas Marceau called it "a budget of broken promises." He accused the Liberals of failing to meet the level of job creation and investments promised in the election campaign. 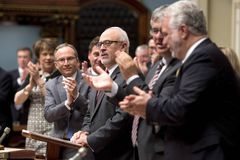 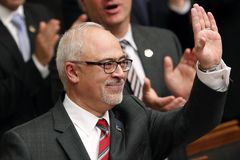 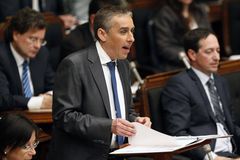 Liberal MNA gives PQ the finger in National Assembly
May 26, 2014 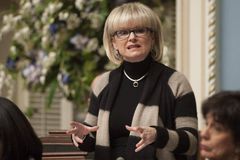