A politician can't make a quip about casually killing kittens, it turns out, without having to endure some backlash.

Huntingdon, Que., Mayor Stephane Gendron is now being investigated by animal-rights activists; monitored by a broadcast regulator; ridiculed on U.S. websites; and has seen his station dropped by an advertiser.

The small-town mayor, whose other career is radio shock-jock, posted a weekend letter on the website of his show apologizing for his "dark humour" without ever clearly stating whether he had — or had not — ever killed kittens.

Attempts to draw out a more definitive answer have been unsuccessful.

When asked for comment on this latest controversy, he told a Canadian Press reporter waiting outside his radio studio Monday that his published statement would have to suffice.

"The apologies were done."

The controversy began last week when Mr. Gendron told the radio show that his annoyance with all the feral cats around his semi-rural town had led him to practice his own brand of animal control.

"When I see a cat in the street, I accelerate," Mr. Gendron said last week on the show. "Stray cats have no business on the street," he said, raising his voice to a shout for dramatic emphasis: "So bang! I accelerate."

He went on to add that the other day he had backed up his truck over a newborn kitten and was sure "it didn't feel a thing."

A Quebec-based distributor of pet supplies and accessories, Mondou, has announced it will be severing ties with the radio station where the mayor hosts a talk show.

The company had purchased airtime this spring on many Quebec radio stations — including Radio X — for an advertising campaign.

It says it won't be running such ads again on the station.

"Mondou does not endorse Stephane Gendron's comments on Radio X," the company announced on its Facebook page, adding that animal welfare is the company's main concern.

Beyond the loss of ad revenue, the broadcast regulators are getting involved.

The Canadian Broadcast Standards Council says it has received complaints about Gendron's cat comments — but can't say how many, or give details as to what qualms were specifically addressed.

The CBSC says that once it receives a complaint it asks the broadcaster to immediately ensure that the recording is saved.

The station in question then has three weeks to answer the complaint. If, at that point, the complainant does not deem the response satisfactory, the CBSC will hold a panel and issue a decision. The council can require networks to air its rulings.

In this case, it could be months before any verdict is reached.

Mr. Gendron's bigger headache might be elsewhere. The SPCA says it is taking the situation seriously, and has announced that an animal-cruelty investigation is ongoing.

The case has also drawn ridicule outside Canada's borders.

It has been referred to by popular U.S. websites Buzzfeed and Gawker, the latter of which ran a feature called "Canada's Horrible Mayors: A Bestiary."

The site describes numerous recent scandals involving different Canadian mayors and likens each of them to a unique species. It calls Huntingdon Mr. Gendron's "principal habitat" and says: "This beast can be distinguished by: recently acquired cool-guy glasses, roadkill-mashed tires, a big mouth."

Under a headline that calls Mr. Gendron a "crazy mayor," Buzzfeed pairs the story with stunned-cat photos and kitten videos.

But not everyone is laughing.

In the same central Montreal neighbourhood that hosts Gendron's Radio X studio, the Pussy Patrol is a stray-cat rescue group.

It calls the comments all too common.

"Shocking, but not surprising," said group member Leni Parker, in a written response to the mayor's statements.

"Quebec is one of the worst places on the planet in terms of of animal abuse and complacency."

Ms. Parker says the mayor should be removed from office. But she's happy that, at least, an investigation is underway.

It's far from Mr. Gendron's first brush with controversy.

The outspoken politician was reportedly served just last month with a defamation suit by the group of municipalities in his area.

Last year, he apologized for calling Israel an apartheid state that doesn't deserve to exist.

He was once removed from television by a now-defunct network for making controversial comments that resulted in numerous complaints.

Quebec mayor in cat scandal no stranger to controversy
July 15, 2013 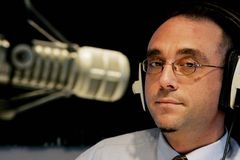