The allegations of rot have dripped out piecemeal for years, and now they've been confirmed by investigators in black-and-white: Organized crime's grip on the Quebec construction industry has created a system of corruption and influence-peddling in the awarding of lucrative government contracts.

The leaked report of a government-ordered probe fell like a bombshell on the province on Thursday, dealing a serious blow to Liberal Premier Jean Charest as he tries to persuade a dubious public that his anti-corruption measures are enough to clean house.

The report from the probe, headed by former Montreal police chief Jacques Duchesneau, outlined a covert culture of intimidation, fear and illegal practices reaching from construction and engineering firms into political parties through cash donations.

The findings of the Ministry of Transportation's anti-collusion squad fed public cynicism in a province that has grown weary of ongoing reports of corruption in roadwork even as their highways and bridges crumble.

"We all knew this was happening for years in Quebec, but no one dared say it, and everyone turned a blind eye," said André Cédilot, an investigative journalist and author on organized crime who has read the Duchesneau report. "This puts the pieces of the puzzle together, and it's incredible. Corruption and collusion has been created into a system. People should be scandalized."

The anti-collusion unit was set up in February, 2010, after allegations of influence peddling in the awarding of billions dollars a year in road-building contracts.

The report, which was leaked to some media outlets, said that organized crime, biker gangs, construction companies and engineering firms conspired to inflate the cost of road-building projects, devising schemes that also involved kickbacks to political parties.

Cost overruns were planned and became common practice in the industry, according to the report. "Cartels" consisting of the Mafia, biker gangs and construction companies conspired to eliminate competition and manipulate the public-tendering process.

"The suspicions are persistent to the point that a criminal empire was on the verge of being consolidated in the area of road construction," Mr. Duchesneau wrote in the report's preamble.

The report suggests the Transportation Ministry has lost control over roadwork projects by contracting out work to private firms. In doing so, it said, the ministry lost the expertise to supervise the projects properly, allowing collusion and influence peddling to become rampant.

In one example cited in the report, engineers would say 1,000 truckloads were needed to remove contaminated soil from a construction site, knowing that 100 would do, and the unused money would find its way into the pockets of crime organizations, engineering firms and political parties.

"The Ministry of Transportation has no means to sanction engineering firms who make up wrong cost evaluations and poor plans," the report stated.

Mr. Charest now faces renewed demands to call a full public inquiry into the construction industry and its ties with political parties.

"We finance organized crime with taxpayers money to the tune of $4-billion a year," Parti Québécois transportation critic Stéphane Bergeron said. "These revelations are no longer just allegations. They are facts. The government can't ignore the facts."

The report also said entrepreneurs who failed to co-operate with the price-rigging schemes and collusion practices were "threatened or faced intimidation from their competitors."

The province's Chief Electoral Officer will meet with Mr. Duchesneau to examine his findings and determine whether to launch an investigation into possible illegal funding of political parties.

Transport Minister Pierre Moreau rebuffed calls for a public inquiry, saying the report exposed subterfuge within the system. "Starting with what Mr. Duchesneau has found, there will have to be a police investigation, collection of evidence, and eventually charges," he told reporters. 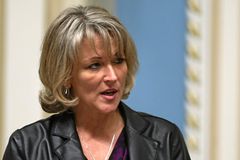 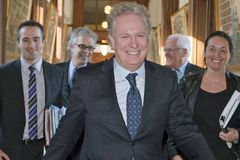 Quebec corruption probe reaches from hard hats to high-rise offices
December 3, 2010
Follow Ingrid Peritz on Twitter @iperitz
Report an error Editorial code of conduct
Due to technical reasons, we have temporarily removed commenting from our articles. We hope to have this fixed soon. Thank you for your patience. If you are looking to give feedback on our new site, please send it along to feedback@globeandmail.com. If you want to write a letter to the editor, please forward to letters@globeandmail.com.
Comments