Rahim Jaffer doesn't have a friend in town. The way he behaved Wednesday, no wonder.

Even Conservative MPs turned on their former caucus chairman over misdeeds that have estranged him and his wife, the former cabinet minister Helena Guergis, from the Conservative Party.

Mr. Jaffer arrived at the government operations committee hoping to clear his name over challenges of improper lobbying and other misbehaviour.

Instead, he and his partner, Patrick Glémaud, stonewalled and obfuscated to the point where the committee gave Mr. Glémaud 24 hours to come up with the names of three firms their company had represented in proposals for federal funding or face a contempt citation.

Those proposals, obtained by The Globe and Mail, have Green Power Generation - that would be Mr. Jaffer and Mr. Glémaud - promoting projects by other companies with an ambitious combined value of nearly $1-billion. Even the government can't figure out Green Power Generation's role in all of this, as one bureaucrat complains in a note turning down one of the projects.

No wonder neither of them wanted to talk about the proposals. They offer the very opposite of exoneration.

The Conservatives have decided to completely shun Mr. Jaffer and Ms. Guergis. The two Tory MPs on the committee joined the opposition in threatening Mr. Glémaud with a contempt citation.

When Mr. Jaffer insisted his personal website had never promoted his ability to use his connections to help businesses looking for government money, it was a Tory MP who waved a print copy of the now-vanished website in the air saying that is exactly what it said.

"This type of behaviour sullies all of our names," lamented Chris Warkentin, as Mr. Jaffer listened uncomfortably.

"Do you understand that your actions have tarnished the reputations of politicians from all parties?" asked Tom Lukiwski, parliamentary secretary to the House Leader.

Facing such friendly fusillades, Mr. Jaffer must have found the opposition attacks redundant.

Mr. Jaffer has been shunned by his own party, humiliated in the very room where he once presided over caucus meetings. His sin: hanging out with the wrong people, saying and doing foolish things, embarrassing the government.

He appears stunned by the ferocity with which the Conservatives have ostracized him and his wife, kicking her out of caucus as well as cabinet. But the fact is, the couple aren't part of the Conservative Party any more. Ms. Guergis can expect the party to nominate another candidate in her riding of Simcoe-Grey. If she wants to run, it may have to be as an independent. Odds would be long.

The sad truth is that Mr. Jaffer might not have done much of anything seriously wrong. The government never gave a penny to any firm his firm represented. Nazim Gillani, the indicted businessman who claimed Mr. Jaffer was going to use his inside contacts to drum up business, has recanted, saying he was "over enthusiastic" in his claims. No photograph has surfaced of Mr. Jaffer and Ms. Guergis at a compromising social function.

His sin was to make enough noise that Prime Minister Stephen Harper decided it wasn't worth figuring out fact from gossip and proscribed the couple - for good, it appears.

The RCMP may announce there's nothing here, move along; the Lobbying Commissioner may conclude there was no wrongdoing; the Ethics Commissioner seems determined to keep her distance.

None of that matters. This is politics, and politically, Rahim Jaffer and Helena Guergis are the loneliest couple on Earth. 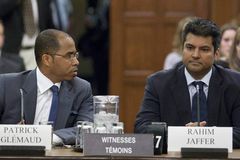 NDP grows tired of Guergis affair, asks for Parliament to move on
April 19, 2010