Stephen Harper, a man not known for political U-turns, has beat the quickest retreat in his career after facing a backlash from the Conservative Party base over his proposal to rewrite O Canada.

The Prime Minister's Office announced Friday the government is abandoning the notion of replacing the line in the anthem about "all thy sons command" with a gender-neutral substitute.

The reversal came just 48 hours after the Tories floated the suggestion in their Throne Speech - a document that was supposed to showcase for Canadians all the ideas Mr. Harper's government had gathered during the two-month prorogation of Parliament.

Controversy over editing the anthem was proving an unwelcome diversion for the Tories, who had planned to use this week to unveil their new economic agenda for Canada and trumpet their plan to whittle down the deficit and make the country more competitive.

"[Canadians]have already spoken loud and clear. They overwhelmingly do not want to open the issue," PMO director of communications Dimitri Soudas said in a bluntly worded statement e-mailed to journalists. "The government will not proceed any further to change our national anthem."

Conservatives say an angry pushback from voters swiftly followed the Throne Speech and persisted through the tabling of the 2010 budget - a reaction that may have dented Mr. Harper's reputation as a master tactician.

If there's one demographic in Canada most likely to oppose an anthem rewrite, it would be Conservative voters.

The Tory base is especially patriotic and deeply attached to symbols of pan-Canadian nationality such as the flag and anthem, former Harper adviser Tom Flanagan said.

Conservative voters, more likely than not, are male, married and middle-aged or elderly. Predominately middle-income in earnings power, they often live in suburban or rural Canada.

The most hard-core Conservatives would see rewriting O Canada as "tampering with sacred symbols," said Prof. Flanagan, a University of Calgary political scientist.

Conservative MPs say they were deluged with e-mails and telephone calls complaining about the proposed rewrite. One said that the reaction in his riding came "quite quickly" with the "vast majority" of responses opposing change. "It hit talk radio shows immediately after the speech," the MP noted, adding even Liberal friends railed against making changes.

Treasury Board President Stockwell Day told CTV's Power Play that it became quickly apparent there was no need to continue consultations on the anthem change.

"We just thought: 'Why drag this out?' We've heard loud and clear and we'll put this [idea]aside," Mr. Day said.

Another Tory cabinet minister estimated that 90 per cent of the Conservative caucus was opposed to tampering with the anthem after the negative feedback it had been receiving since Wednesday.

The anthem stumble stands in contrast to Mr. Harper's largely successful record as an adept political chess player who's good at plotting moves to survive the perils of minority government. It was only last fall his carefully prepared performance of a Beatles song alongside cellist Yo-Yo Ma earned him extra goodwill and plaudits from across Canada.

Friday's reversal leaves Mr. Harper in the unfortunate position of having both alienated his political base and then, after backtracking, annoying the voters he might have attracted by removing a reference in the anthem long criticized as sexist.

It was only days ago, for instance, that Canada ended the 2010 Winter Olympics with a record medal haul largely due to the success of female athletes, women who were feted by a national anthem that mentions "sons," but not daughters, of this country.

Former Alberta premier Ralph Klein employed these to survive several missteps, including an 1998 attempt to use the Constitution's notwithstanding clause to cap compensation for Albertans sterilized by the state.

Mr. Klein managed to dodge serious anger from voters by jettisoning the idea one day after he'd unveiled it.

The question now is whether Mr. Harper's quick action will help him similarly skate past the controversy. 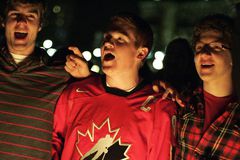 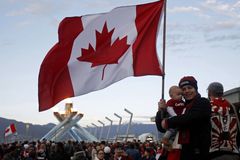