Alison Redford would pour $3-billion into research to clean up Alberta's energy sector and foster technological innovation, a lofty pledge signalling her hope to overhaul the province – and the political battle she faces in that pursuit.

During a campaign stop in the oil sands Wednesday, the Progressive Conservative Leader announced she'd revive the defunct Alberta Oil Sands Technology and Research Authority (AOSTRA). Created by former PC premier Peter Lougheed in 1974, the agency was essential in developing the fledgling sector, which now pours billions into provincial and federal coffers.

AOSTRA 2, as Ms. Redford called it, would develop technology for both renewable and non-renewable energy – chasing, presumably, the source of Alberta's next boom.

The pledge – staggering in its scope as other provinces move to slay deficits – is the latest sign of the stark divide in the election campaign led by two conservative parties – one pushing change, the other patently opposed to it.

There's Ms. Redford, whose campaign is based on big-government thinking (such as health, infrastructure, education and, now, research funding), and is, in a sense, channelling the environmental fears of non-Albertans regarding the oil sands. And there's Danielle Smith, leader of the libertarian Wildrose Party, who would defer infrastructure projects, freeze some salaries, shrink the role of government and leave research to industry. Most polls show the parties neck-and-neck as Albertans weigh what brand of conservatism they prefer.

"It's not money well spent," she said on the campaign trail. Instead, Wildrose would rely on environmental regulations, leaving research spending to industry rather than "picking winners and losers with taxpayer dollars."

"If we don't stop this we're going to end up seeing billions of taxpayer dollars wasted on things that are simply not priorities for Albertans," Ms. Smith said.

So continues the debate on what direction Alberta will take now that it's an energy superpower in a politically charged, carbon-aware world. Ms. Redford said this week Alberta is the envy of North America, but needs to evolve, or "change the character of the province," as its playing field changes. Based on that, the populist Ms. Smith told supporters that Ms. Redford "doesn't like Alberta all that much, doesn't like who we are." Ms. Redford fired back at the "ridiculous" statement.

Instead, she wanted to talk policy – including AOSTRA 2. The former program cost, by one estimate, $448-million, or nearly $1-billion in 2006 dollars. It was designed with a 20-year lifespan, fading out in the 1990s with its lingering projects rolled into a government agency now called Alberta Innovates.

However, much of the work the original AOSTRA did isn't needed any more – oil sands companies are rolling in cash and can afford their own research and development. And some observers warn the new program can't focus on oil sands.

The Alberta "economy is increasingly a one-trick pony, and it will get crushed. And finding ways to improve the process of getting heavy oil out will not help us one iota," said David Keith, a former University of Calgary professor who now teaches at Harvard.

But Ms. Redford said it's about more than oil sands, and that government must take a lead role. "It's not for any particular entity to carry the load fully," she said. "We have to work in partnership for the betterment of the province."

Clement Bowman, who led AOSTRA for a decade, applauded Alberta for setting up a new organization with ambitious research goals. A two-decade commitment is also important, he said: "I think that's the most exciting thing in it."

The original AOSTRA funded a series of research projects in hopes of finding a way to extract oil from sandy bitumen deposits too deep to be mined. Most of them weren't successful, and industry support was tenuous. For example, when AOSTRA set out to test an unproven technique using horizontal drilling, industry said it was too dangerous so the agency went it alone – and developed a new technology, called SAGD, that has unlocked vast swaths of the oil sands.

"Having the government working with industry collaboratively, we see it as a positive step forward," Mr. Little said. "With the money that comes with it, it just allows us to explore other opportunities."

Ms. Redford said an independent AOSTRA 2 board would consider research proposals from public-sector groups – universities, for instance – and private researchers alike. She envisioned it boosting environmental performance in the oil sands, where her government and Ottawa are currently taking steps to improve environmental monitoring.

"I believe this is a very important election for Alberta. It's going to allow Albertans to decide whether or not they want to take a direction forward, or maintain what we have done before," Ms. Redford said. "What we have done before has been wonderful, but we need long-term vision and leadership to do the sorts of things we're talking about today."

Amid election fever, however, Alberta voters may choose a starkly different vision.

Redford and Smith hit Alberta hustings on each other's turf
March 28, 2012
Polls at odds in Alberta election
March 28, 2012
How Alberta votes will shape the country we live in
March 25, 2012 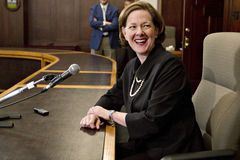 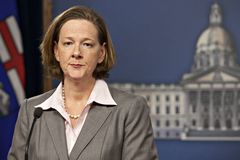 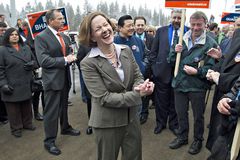 Follow Josh Wingrove and Nathan VanderKlippe on Twitter @josh_wingrove @nvanderklippe
Report an error Editorial code of conduct
Due to technical reasons, we have temporarily removed commenting from our articles. We hope to have this fixed soon. Thank you for your patience. If you are looking to give feedback on our new site, please send it along to feedback@globeandmail.com. If you want to write a letter to the editor, please forward to letters@globeandmail.com.
Comments