Canadians will have to wait until late in the summer before they will be able to legally consume cannabis under a new timeline laid out by the federal government – even if the Senate votes in favour of the legislation by May or June.

Ottawa now says it will give industry up to three months to adapt to strict packaging rules and legally ship their products to provincially regulated stores. This new timeline, unveiled by Health Minister Ginette Petitpas Taylor on Tuesday, means adults will not be able to purchase marijuana for recreational purposes immediately after Bill C-45 is adopted in Parliament.

Explainer: Marijuana legalization: How it will work in your province or territory

Instead, the federal government will wait eight to 12 weeks after the legislation is passed before officially lifting the 95-year-old prohibition on cannabis. The Liberal government had initially hoped to legalize cannabis before July 1, but is now publicly stating that it hopes to achieve its goal at some point in July. It remains unclear exactly when Bill C-45 will be adopted, but it is currently in the early stages of review in the Senate, where it is expected to face vigorous scrutiny and potential delays.

"There is going to be a transition period because we have to ensure that provinces and territories have the capacity to get the products in their shops," Ms. Petitpas Taylor told reporters after appearing in front of a special meeting of the Senate.

"They'll need a period of time of up to eight to 12 weeks in order to properly ensure that their retail sales will be prepared."

A number of senators, in addition to provincial officials and law-enforcement authorities, have called for delays in the implementation of legalization to ensure that they are ready from the outset. On Monday, the B.C. government announced that its first standalone government stores are only expected to be selling cannabis by "late summer."

Canada's largest medical-cannabis company, which will be able to supply the recreational market after the product is fully legalized, said it will be able to adapt to the government's timeline.

"In my mind, I've been thinking August 1. So if it's July 10 or 18, I really don't care," said Bruce Linton, the chief executive officer at Canopy Growth Corp. "It's going to be better if it's in the summer because people are on vacation. But, other than that, every minute that we have longer just allows us to have more assets available and to negotiate better deals."

Provinces where cannabis will be sold through government-run stores have started signing early contracts with growers to supply product to their shops. Mr. Linton said this is helping his company plan for the future by allowing Canopy to "start doing our work with a lot less guessing."

Others remain concerned by the uncertainty surrounding the new market.

Throughout the two-hour session, senators raised a series of concerns about the government's plans, including a potential rise in youth consumption, the eventual legalization of edible cannabis products and the level of controls on the branding of cannabis products.

The Conservative Leader in the Senate, Larry Smith, said his party will not act in an "obstructionist manner" during the review of Bill C-45. Still, he said senators have many concerns over the government's plans, including measures to reduce cannabis use among kids and teenagers.

"Will you allow for more time to publicly educate our youth on the enormous risks to their health of using marijuana? If not, what is the rush?" Mr. Smith asked.

Ms. Petitpas Taylor answered that the current system has failed to stop the widespread use of cannabis among youth in Canada, adding that her government has launched a $46-million public-awareness campaign on the dangers of the drug.

Senator Serge Joyal criticized the fact that a number of licensed producers of cannabis have investors who are located in tax havens, where criminal figures can benefit from lax disclosure rules to shield their identity.

"My preoccupation is that the way Health Canada is granting [production] permits, the way they screen where the money comes from, is not sufficient to guarantee Canadian taxpayers that in fact, we're not allowing through the back door what we are trying to eliminate through the front door," Mr. Joyal said.

Mr. Goodale responded that as it stands, the entire cannabis industry in Canada, outside of the medical-marijuana regime, is in the hands of criminals. He said federal officials will strive to ensure that no one can avoid the security checks that are part of the licensing process for producers. 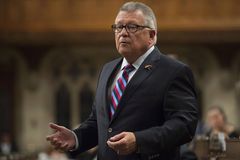 Follow Daniel Leblanc and Christina Pellegrini on Twitter @danlebla @chris_pelle
Report an error Editorial code of conduct
Due to technical reasons, we have temporarily removed commenting from our articles. We hope to have this fixed soon. Thank you for your patience. If you are looking to give feedback on our new site, please send it along to feedback@globeandmail.com. If you want to write a letter to the editor, please forward to letters@globeandmail.com.
Comments are closed