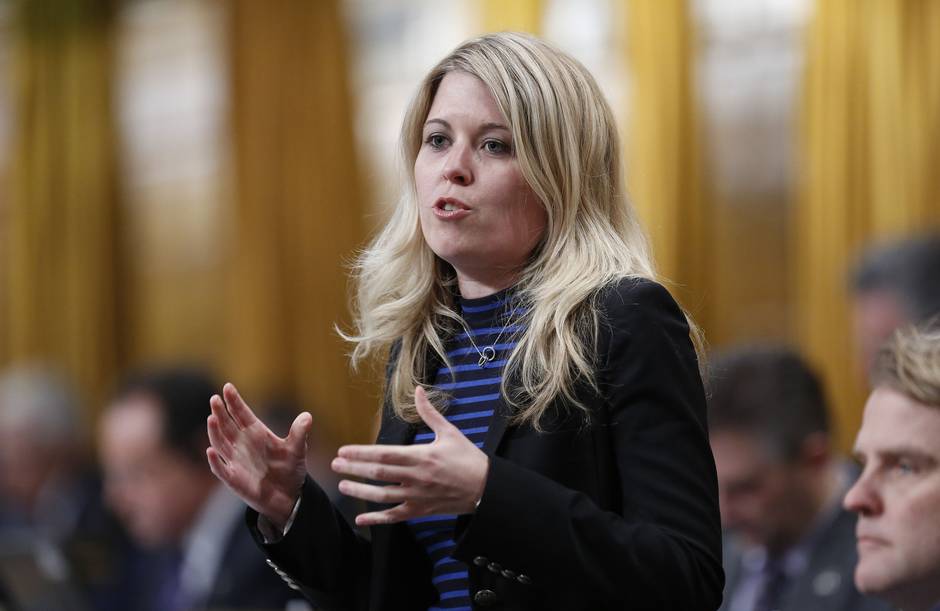 Michelle Rempel has never shied away from pointing out sexism on Parliament Hill. Chris Wattie/Reuters

Blonde, bossy and too young – Michelle Rempel turns the tables on political misogyny

In a series of provocative late-night tweets, Conservative cabinet minister Michelle Rempel has already begun to define the upcoming leadership race. With the ballots barely counted from Monday’s election, in which her party, led by Stephen Harper, was defeated by Justin Trudeau’s Liberals, Ms. Rempel’s mocking tweets reflect what she and her female colleagues can expect to hear if they enter the leadership race.

“She couldn’t possibly knock Trudeau off his game,” she tweeted, of herself. (She has more experience in government than Mr. Trudeau, having served as Minister of State for Western Economic Diversification Canada.) In another, she wrote: “It’s not like she navigated tricky communications for four years, a high profile parl committee or reformed a federal department. Pfft.”

There’s more: “But but but but she’s so YOUNG and ONLY FOUR YEARS [experience] and SO BOSSY.”

Ms. Rempel, 35, has never shied away from pointing out sexism on the Hill. She’s bold, gutsy and, along with Transport Minister Lisa Raitt, is one of the alpha-females in that male-dominated Conservative caucus. Ms. Rempel was re-elected as a Calgary MP on Monday night with 60 per cent of the vote.

She told The Globe and Mail on Thursday that she wants an “open, robust and vigorous” leadership process. This was her way of getting the ball rolling. Nothing should be “taboo,” she says.

She has not said no to a leadership run. She wants a long leadership process that allows all sorts of ideas to be debated.

“I guess what I was trying to do is encourage a lot of people to think about it and encourage a broader discussion, which it did,” she said of her tweets. “The best leaders in politics are those who define themselves and don’t let others do that for them. And I think that happens when you’re authentic. Sometimes you don’t get room to be authentic in politics. …”

Though it is early days, the media commentary she has seen about potential leadership candidates has been very predictable. She is mindful of the criticism that her party did not project a tone of optimism and hope during the campaign.

Ms. Rempel, however, would not criticize Mr. Harper’s leadership directly.

“We were in government for 10 years, and I think we achieved a lot of good things,” she said. “I think the question for us is did that resonate with Canadians, and obviously it didn’t in certain areas. And how do we change that going forward?”

Nancy Peckford of Equal Voice, the non-partisan organization that advocates for more elected women, says her group is “extremely encouraged that as a younger woman she would think about being a contender.”

Ms. Rempel’s reflections make her more real. And for those who don’t think she’s old enough or experienced enough, “it kind of knocks them off their game,” she added. 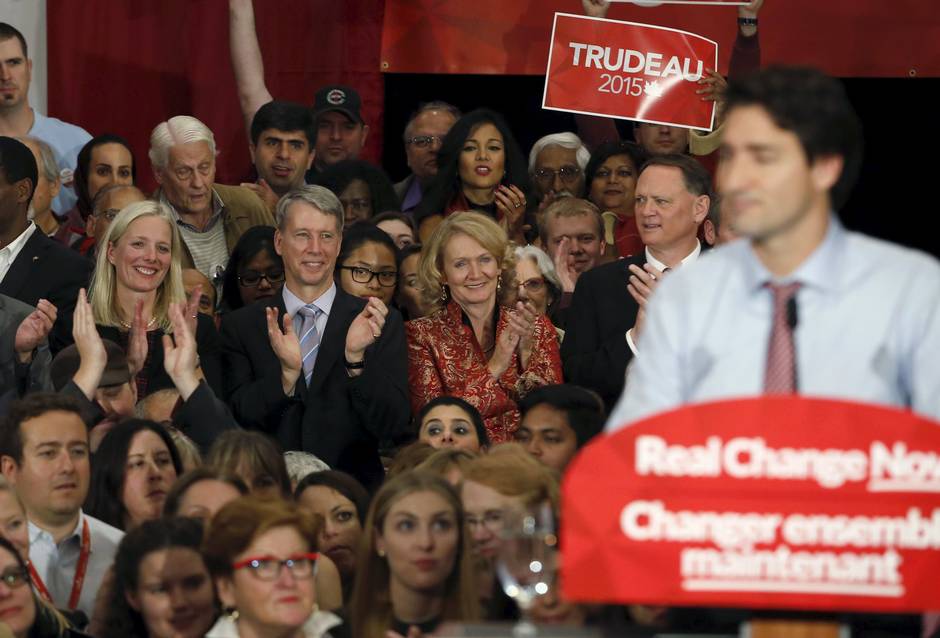 Prime-minister-designate Justin Trudeau vowed to make his cabinet gender neutral, but it will be meaningless if women are in junior roles. According to Equal Voice, the Liberal Party has elected the largest-ever women’s caucus of a governing party – 50 of 184 MPs, or 27 per cent. With those numbers and the talent among the women, Ms. Peckford says her organization is expecting Mr. Trudeau to “break the mould” by appointing women to senior cabinet posts such as agriculture, trade, defence or industry. Traditionally, women are junior ministers or serve in social portfolios, such as health or heritage. The important economic portfolios usually go to men.

“He has at his disposal more than enough talent to put women in some unconventional, if you will, cabinet posts,” she says. 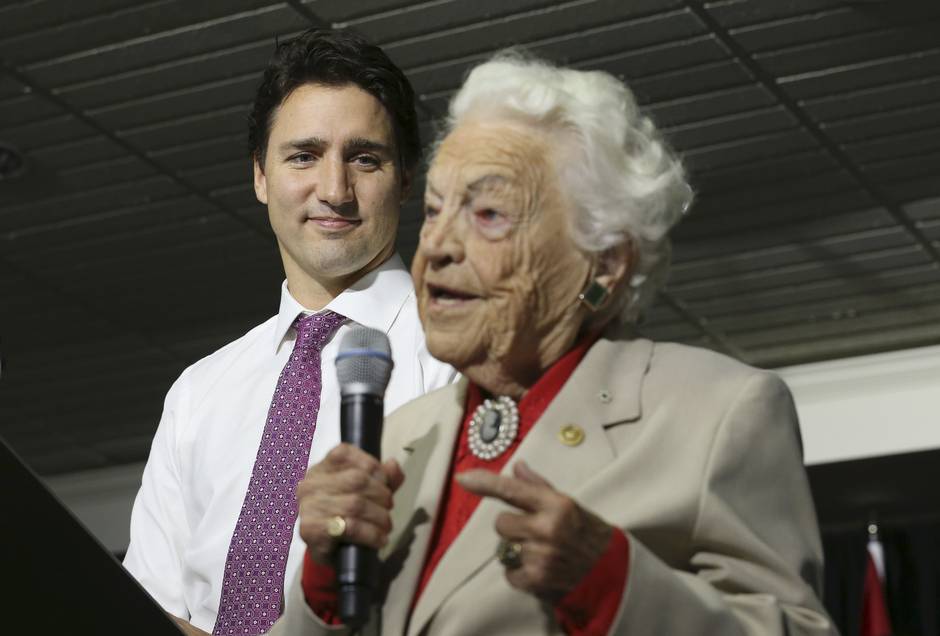 The legendary 94-year-old former mayor of Mississauga, Hazel McCallion, gave her blessing to Justin Trudeau, and in the dying days of the campaign, gave the Liberal advertising agency just 20 minutes to shoot an election ad to help blunt the perception left by the Tories that the Liberals intended to eliminate income splitting for seniors.

At 6 a.m. on Oct. 11, Mr. Trudeau’s principal adviser, Gerald Butts, sent an outline of the ad to David Rosenberg at Bensimon Byrne, the agency creating the Liberal ads. Mr. Rosenberg wrote and shot it on Tuesday, according to a senior Liberal source. And by Wednesday, it was running repeatedly, and seen by millions of Canadians during the Toronto Blue Jays’ crucial Game 5 against the Texas Rangers.

“Stephen, do I look scared to you?” Ms. McCallion asks, staring straight into the camera after accusing Mr. Harper of lying to seniors about the Liberals’ income-splitting policy.

The ad echoes another feisty senior citizen, Solange Denis, who famously took on prime minister Brian Mulroney over his decision to partly de-index pensions. “You lied to us. ... You made us vote for you and then, goodbye Charlie Brown,” she said. A week later, Mr. Mulroney abandoned his plan to de-index pensions.

Ms. McCallion’s ad was so good that it also ran in British Columbia, where few would even know the former mayor.