A Republican fundraising power couple could be on their way to Ottawa as sources say Kelly Knight Craft is under serious consideration as Donald Trump's pick for ambassador to Canada.

Ms. Knight Craft was a senior adviser to the U.S. ambassador at the United Nations under President George W. Bush and is a well-known Republican activist. Her billionaire husband, Joe Craft, is the chief executive officer of a major American coal producer, Alliance Resource Partners.

The appointment is not believed to be final and it is not known with certainty whether other individuals are also in contention. Several sources told The Globe and Mail that Ms. Knight Craft's name is under consideration at senior levels in U.S. President Trump's administration.

One source said she would be a good pick because of her major role as a fundraiser for Mr. Trump. Canadian officials are hoping for an ambassador who will have strong connections with the White House.

The Crafts have close connections with veteran Republicans in Congress, such as Senate Majority Leader Mitch McConnell. Such connections could also prove to be valuable given the fact that Canada has a lot riding on how Congress deals with issues such as tax reform and Buy America provisions for infrastructure spending.

The couple was heavily involved in Mitt Romney's unsuccessful presidential campaign in 2011, serving as his Kentucky State Finance Chairs.

They are major donors to the University of Kentucky, where an athletics facility is named after Joe Craft.

The couple announced last June they were supporting Mr. Trump in part because he had privately promised he would not replace House Speaker Paul Ryan or Mr. McConnell.

"That is a big priority for Joe and I – and from talking directly to Donald Trump, I know for a fact it is a big deal to him," Ms. Knight Craft was quoted as telling Bloomberg News last June.

The couple's connection to the coal sector could be a source of awkwardness on Parliament Hill. Many of the senior Liberals around Prime Minister Justin Trudeau come from the Ontario government, where the phasing out of coal-generated power is viewed as a signature achievement.

The Trudeau government's national climate change plan is also focused on encouraging other provinces to move away from coal.

While climate change is a major political issue for the Liberal government, Mr. Trudeau has focused instead on trade and the economy in his public statements with the President in an effort to find common ground. Mr. Trump has previously described climate change as a hoax, but his administration has since backed away from those comments. Reviving coal mining jobs in hard-hit American cities and towns was a major campaign promise of Mr. Trump's.

Mr. Trudeau and Mr. Trump spoke by phone Thursday but their descriptions of the phone call did not mention the ambassador position.

"President Trump emphasized the importance of working closely with Canada on cross-border issues, including implementation of his administration's actions to protect America from terrorist attacks by foreign nationals and others," the White House said Thursday in a statement. "The two leaders noted their desire to continue building on the countries' deep partnership, which has been strengthened by their meeting on February 13."

In Donald Trump’s world, Canada has to embrace the chaos
February 24, 2017 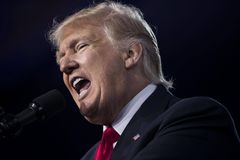 Donald Trump vows military buildup, lashes out at media in CPAC speech
February 24, 2017
Follow Bill Curry and Robert Fife on Twitter @curryb @RobertFife
Report an error Editorial code of conduct
Due to technical reasons, we have temporarily removed commenting from our articles. We hope to have this fixed soon. Thank you for your patience. If you are looking to give feedback on our new site, please send it along to feedback@globeandmail.com. If you want to write a letter to the editor, please forward to letters@globeandmail.com.
Comments