A commission established to document the truth of what happened inside Canada's Indian residential schools will say the goals of the Canadian government that created the institutions amounted to a cultural genocide, sources say.

Justice Murray Sinclair, the chair of the Truth and Reconciliation Commission (TRC), set up as part of the settlement agreement with survivors of the former church-run schools, will release his recommendations Tuesday after a five-year inquiry into the sexual, physical and emotional abuse that was rampant within the institutions.

The summary report, which will be followed by a full report later this year, will explain the measures necessary for reconciliation between Canada and its indigenous people, many of whom were permanently scarred by the residential-school experience. It will say that, for more than a century, the central goal of Canada's aboriginal policy was assimilation "which can best be described as a cultural genocide."

The pronouncement comes on the heels of a speech last week by Beverley McLachlin, the Chief Justice of the Supreme Court, who said Canada attempted to commit "cultural genocide" against aboriginal peoples in what she described as the worst stain on Canada's human-rights record.

First Nations leaders and human-rights experts have been actively pressing for at least two years for Canada to recognize that its historical treatment of indigenous people, including nutrition experiments conducted on children at aboriginal residential schools, constituted a genocide. But the government has not been supportive.

The TRC report is under tight wraps until its release, but Justice Sinclair has strongly signalled it will recommend that the history of residential schools becomes part of the educational curriculum in every province. At the moment, it is mandatory only in the Northwest Territories and Nunavut, though Yukon is taking steps in that direction and Alberta has said it intends to follow suit.

Jackson Lafferty, the Northwest Territories Minister of Education, is a former residential-school survivor who was behind the effort to ensure all children in his territory learn about residential schools and is encouraging provinces to follow his lead.

"It is broader than just an aboriginal issue," Mr. Lafferty said. "It is a Canadian issue that everybody should be aware of, especially the teachers who are teaching our kids."

On the question of genocide, Perry Bellegarde, National Chief of the Assembly of First Nations, told a news conference on Monday that the word is an important way of describing the historical experience of aboriginal people in Canada.

Justice McLachlin's recognition of genocide was very powerful, said Mr. Bellegarde. "And that will be a recognition of what needs to be done to help bring about reconciliation, to move away from cultural genocide …"

The United Nations defines genocide as the intent to destroy a national, ethnic, racial or religious group through any of a number of means including killing its members, causing them serious mental or physical harm, subjecting them to unsustainable living conditions, preventing births of their children and forcibly transferring their children to another group.

There are indications that the Canadian government was concerned about this. It was not until 2000, four years after the last residential school closed, that Canada adopted a limited definition of genocide, which excluded the last line about the forcible transfer of children. Courts have rejected native claims of genocide against Ottawa and the churches because Canada had no law banning genocide while the schools were operating.

Trent University Professor John Milloy, who served as research director and then a special adviser to the TRC, said the question of how to use the word genocide in relation to Canada's residential schools has long been a matter of debate.

Dr. Milloy said some have been reluctant to use the word out of concern that it would be seen as an attempt to equate Canada's history with the genocide of Jews by the Nazis during the Second World War.

He said he believes the term "cultural genocide" is appropriate to the aboriginal experience in this country. However, Dr. Milloy said he received legal opinions while working for the TRC that suggested it is an open question as to whether the UN definition fits with what happened in Canada because of the way the opening sentence is written.

The commission didn't have the resources to fully research that question, he said. "It was, at the end of the day, kind of unsatisfactory."

The TRC was created as a result of the largest class action in Canadian history. When former students of Indian residential schools decided to settle out of court with the federal government and four national churches, the launch of a TRC was part of the terms of settlement. The commission's mandate was to gather the written and oral history of residential schools and to work toward reconciliation between former students and the rest of Canada.

While Prime Minister Stephen Harper offered a historic apology for the harms done to aboriginal children in 2008, native leaders have taken a harsher view of the reconciliation process – accusing Ottawa of putting the victims on trial and of creating an atmosphere of suspicion and hostility. 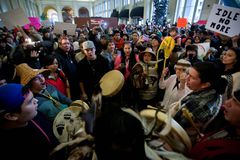 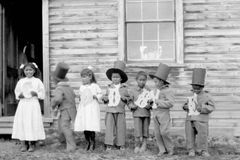