Tom Mulcair will arrive at the first French-language debate with something no NDP Leader has ever had in the important Quebec-anchored contest: the biggest target on his back.

At Parliament's dissolution, Mulcair's party held by far the most seats in Quebec, the home province of many voters who will be focused on Thursday's widely broadcast TV debate.

Mulcair's opponents, all hoping to win new territory in the Oct. 19 election, are expected to direct most of their attacks toward the presumed front-runner.

His performance will be critical for a party that has seen its lead slip in a province considered the bedrock of its support, recent polls have suggested.

"Overall, it's fragile – it's really fragile in Quebec," pollster Jean-Marc Leger said of NDP support, which, he added, appeared to be stronger at the start of the campaign.

"It's become more and more difficult for [Mulcair] to connect with Quebecers, so this debate is crucial for him if wants to maintain his vote.

"He was too strong, too soon."

Leger, founder and president of the Leger polling firm, pointed to several tricky issues that he said have caused problems for the NDP.

Mulcair's rivals are fully expected to press him on these subjects during the debate.

They include the party's support for people who wish to wear a niqab face covering when they take the citizenship oath, its position on TransCanada's Energy East pipeline and its policy to accept a bare majority plus one for Quebec to secede in a future referendum on independence.

The NDP, however, argues the debate will be an excellent opportunity for Mulcair to persuade Quebecers he's in the best position to replace Conservative Leader Stephen Harper as prime minister.

Mulcair will use the debate soapbox to try to build on the NDP's electoral breakthrough in Quebec in 2011, said senior campaign adviser Brad Lavigne.

"Four years later, the rest of Canada is ready to join them in that effort to defeat Stephen Harper," Lavigne said of Quebecers, who voted en masse for the NDP in the last election.

"He'll be pressing that case during the debate."

Mulcair has been forced to navigate several complex issues in Quebec, but none perhaps have been as difficult as the heated debate on the niqab controversy.

He has refused to back an argument that women should be required to remove their veils during citizenship ceremonies, despite the fact such a decision would prove popular among many voters.

Meanwhile, the Tories and Bloc Quebecois support the position that women's faces must be uncovered when they take the oath.

Harper and Bloc Leader Gilles Duceppe, who have both released attack ads directed at the NDP on this issue, are expected to grill Mulcair on the subject in the debate.

Mulcair delivered a speech in Montreal on Wednesday in an effort to clarify the NDP position on the issue. He told a crowd of supporters that he backs the existing rules that say applicants must identify themselves by showing their face to an official before a ceremony.

It's unclear whether it will be enough to woo Quebecers who have concerns about the issue.

The debate over the accommodation of minorities has been festering for years in the province – particularly outside Montreal – where many people worry the Quebecois culture and language is under threat, said Leger.

Leger said the issue really hit the public's radar in 2007 with Quebec's Bouchard-Taylor commission and resurfaced in 2013 when the then-Parti Quebecois government tabled its so-called values charter. The proposed secularism charter would have forbidden public employees from wearing religious symbols, such as the Muslim veil, in the workplace.

"This debate was never solved, so we still have a lot of people who are angry about this and they want to find a solution," Leger said.

Leger believes Mulcair's campaign has also been hampered by other issues, including his position on the controversial Energy East pipeline project that would pump oilsands crude through Quebec.

The NDP Leader, he added, must clarify his position because many Quebecers aren't sure whether he would eventually support a pipeline that has raised environmental concerns in the province.

When it comes to the niqab debate, NDP candidate and incumbent Alexandre Boulerice said while it's an emotional issue for some people, he thinks they will realize the goal of the election is far more important: it will determine the leader of a G7 country.

On the pipeline, Boulerice said the party has been clear in stating that Energy East should not be approved under the Harper government's rules. He said the project lacks a rigorous environmental process, adequate public consultations with local communities and offers no guarantees of economic benefits for Quebec.

Boulerice expects Mulcair to find himself in the crosshairs for much of the debate.

"It's a tough and difficult position," said Boulerice, who insisted Mulcair will succeed in presenting himself as a "prime minister in waiting."

"You have to remain optimistic and you have to be relaxed and be very clear about your proposals." 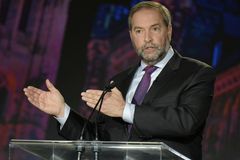 Campaign notebook: What’s at stake in the French debate
September 24, 2015
Report an error
Due to technical reasons, we have temporarily removed commenting from our articles. We hope to have this fixed soon. Thank you for your patience. If you are looking to give feedback on our new site, please send it along to feedback@globeandmail.com. If you want to write a letter to the editor, please forward to letters@globeandmail.com.
Comments