Rona Ambrose vacationed on a yacht owned by a billionaire Calgary oilman whose aerospace company benefited from tens of millions in federal funds from the Conservative government during her tenure in cabinet.

But the Conservative interim leader insists there is no link between her relationship with businessman Murray Edwards, who she says is a close friend of her spouse, and the fact that Magellan Aerospace Corp., of which Mr. Edwards is chairman and majority shareholder, received federal money.

"No," she told The Globe and Mail in a brief interview this week.

Justin Trudeau's out of touch with the 99 per cent

Ms. Ambrose has come under fire in recent days, after it was revealed she was vacationing aboard Mr. Edwards's yacht in the Caribbean at the same time she was criticizing Prime Minister Justin Trudeau for embracing the "billionaire lifestyle" for his trip to the Aga Khan's private island in the Bahamas.

Mr. Trudeau is currently under investigation from the Ethics Commissioner for potentially breaking the federal Conflict of Interest Act.

But Ms. Ambrose, who is no longer subject to the law because she is not a minister or parliamentary secretary, broke no rules under the MP conflict of interest code for her January trip, the Ethics Commissioner's office said.

Ms. Ambrose and her senior staff are insisting that she never acted unethically during her government tenure when it came to contracts awarded to Mr. Edwards's company. Her office, however, gave different accounts of when she began a relationship with her common-law spouse J.P. Veitch – a long-time friend of the billionaire businessman, who recently relocated from Calgary to London.

Archived public records show Magellan, or one of its divisions, won federal contracts or benefited from funding worth almost $100-million between 2008 and 2015, when Ms. Ambrose held a series of cabinet roles, including public works.

Her office initially said her relationship with Mr. Veitch became serious only in late 2012 or early 2013, although a February, 2016, Globe and Mail profile of Ms. Ambrose noted they had been together for six years. Her office later said the two first met on July 17, 2010.

Conservative spokesman Jake Enwright had told The Globe Ms. Ambrose "did not begin her relationship with Mr. Edwards as friends until after she was elected [interim] leader of the Official Opposition" in November, 2015.

Mr. Edwards was out of the country Thursday and could not be contacted, a spokeswoman said. He is currently listed to lobby for another company of which he is chairman, Canadian Natural Resources Ltd. A representative for Magellan said questions about Mr. Edwards should be directed to his spokeswoman.

Lobbying commissioner records show Ms. Ambrose met with Magellan in 2012 and 2013, when she was public works minister, although her office said she set up a self-imposed screen in February of 2013 to remove herself from dealings with Magellan. Her former chief of staff, Lynette Corbett, said Ms. Ambrose asked to be removed from decisions about the company.

"The rule we had was that I would deal with the issues with the officials and she wouldn't be briefed on them," Ms. Corbett told The Globe.

But Magellan's former president and chief executive officer James Butyniec, now the company's vice-chairman, filed a report with the lobbying commissioner that recorded a meeting with Ms. Ambrose and her officials on June 17, 2013, four months after she said she stopped dealing with the company. The subject matter of the communication is "government procurement."

Both Ms. Ambrose's office and Ms. Corbett told The Globe there was no recorded meeting with Magellan in her calendar but Ms. Ambrose opened the Canadian pavilion at the Paris Air Show that day.

"She toured the pavilion at the air show, and spoke at a reception in the evening. She also had a few other meetings, but not with Magellan," Ms. Ambrose's spokesman, Mike Storeshaw, said in an e-mail. "So I don't know why Magellan would have recorded a communication. I suppose it's possible they bumped into her at one of those two events and decided to record it as a matter of practice."

When asked about the meeting, Ms. Ambrose said, "All of those questions have been answered, and you've got all the paperwork to show that I had no involvement with any of that."

A letter dated Feb. 13, 2013, from the Ethics Commissioner's office, provided to The Globe by Ms. Ambrose's office, says the chances of conflict are "very minimal considering your portfolio and Mr. Veitch's private interest, making a public declaration of a conflict of interest screen is not necessary," according to adviser Lyne Salloum.

Ms. Salloum wrote that Ms. Ambrose can establish a screen within her own office, "if you would rather not be involved in any matter or decision … which could potentially affect Mr. Veitch's private interest."

The bulk of the letter is blacked out and it is unclear what Ms. Ambrose specifically discussed with Ms. Salloum or whether Ms. Ambrose discussed Mr. Veitch's friendship with Mr. Edwards.

"Once [Mr. Veitch] and I became common-law, and our relationship became serious enough, then we had a conference call with the Ethics Commissioner to make sure that anything to do with my common-law partner, that I understood what that meant," Ms. Ambrose said. "I had been single for a number of years; now I had someone that was part of my world and so I wanted to understand all of that and she outlined all of that to me."

According to a September, 2008, archived Industry Canada news release, the government invested $43.4-million in Bristol Aerospace Ltd. – a division of Magellan Aerospace Ltd. – to develop technologies to support the F-35 Joint Strike Fighter program. Ms. Ambrose was minister of Western economic diversification at the time, and records show she, along with numerous departments, was lobbied by Magellan throughout her tenure. Her office said she had not met Mr. Veitch at this time.

In April of 2014, Magellan announced a one-year contract renewal, through a competitive bid, for engine repair and overhaul for Canada's fleet of CF-188 Hornet aircraft.

The company said there is an option to renew and it is expected to generate sales of approximately $55-million over the two-year period. The announcement came nine months after Ms. Ambrose headed up public works.

"There was never, ever such a call ever on any file," he told The Globe. "I never met anybody more ethical."

Magellan has also received contracts from the Liberal government, recently announcing a $45-million contract from Public Services and Procurement Canada for engine repair and overhaul on the CF-188 Hornet aircraft.

Archived public records show that Red River College in Winnipeg received $4.4-million from Western Economic Diversification in March, 2011, to establish the Centre for Non-Destructive Inspection Technologies, which would be located on the industrial campus at Magellan Aerospace in Winnipeg.

In March, 2015, the University of Manitoba unveiled a new satellite integration facility at Magellan's facility in Winnipeg, funded with $2.4-million from Western Economic Diversification Canada. Magellan also invested $1.5-million in the project, including $625,000 for a research chair, and contributed to the construction of the facility, according a release.

Ms. Ambrose was the minister of the file between 2007 and 2008, and again between 2010 and 2011, although she is listed as the senior minister on the file until 2015, according to an online document from the Privy Council Office. Her office said she had delegated authority to the ministers of state from 2011 to 2015.

Ms. Ambrose's lawyer, Peter Downard, sent a letter to The Globe and Mail on Thursday stating, "Ms. Ambrose had no relationship with Mr. Edwards prior to July of 2010, when she met Mr. Veitch."

He went on to say: "It would be irresponsible for The Globe and Mail to state or suggest that Ms. Ambrose has acted inappropriately … Any such statement or suggestion would be false and unfounded."

The office of Ethics Commissioner said while there is no requirement for spouses or other family members to use blind trusts, cabinet ministers are still covered by the general provision to avoid acting in a conflict.

They are subject to "the prohibition against using insider information to seek to further their private interests or those of their relatives or friends or to improperly further another person's private interests." 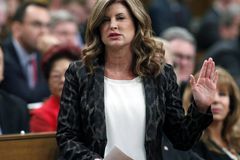 Globe editorial: Our politicians take the best free holidays money can buy
February 6, 2017
Follow Laura Stone on Twitter @l_stone
Report an error Editorial code of conduct
Due to technical reasons, we have temporarily removed commenting from our articles. We hope to have this fixed soon. Thank you for your patience. If you are looking to give feedback on our new site, please send it along to feedback@globeandmail.com. If you want to write a letter to the editor, please forward to letters@globeandmail.com.
Comments