A Conservative bill that proposes mandatory training in sex-assault law for judges and appeared to have all-party support was dragged into political finger-pointing on Tuesday after the Liberals questioned the previous government's appointment of the judge who asked a complainant why she did not keep her knees together.

While asking a question during a House of Commons committee meeting, Liberal MP Pam Damoff pointed out that a Tory justice minister, Peter MacKay, appointed Robin Camp to the Federal Court after he had made the comments as a provincial court judge in Alberta.

Opinion: Forget re-education, we should expect more from our judges

Interim Conservative Leader Rona Ambrose immediately went on the defensive, even before Ms. Damoff had finished her question.

"Are you suggesting that Peter MacKay's responsible for that? Look, these are grown people who accept an appointment after applying," Ms. Ambrose said.

"I would watch your comments because you have no idea what some judge might say or has said or done that your government might appoint. These people are supposed to be capable of the job."

Bill C-377 would require any lawyers who want to become judges to complete comprehensive sex-assault law training. It would also direct the Canadian Judicial Council to report every year to Parliament on continuing education courses it offers on the matter and the numbers of cases heard by judges who have never attended such seminars.

Finally, the bill would change the Criminal Code to require judges to produce written decisions in sex-assault cases, rather than oral verdicts.

Speaking to reporters after the meeting, Ms. Ambrose said the government should be focusing on the proposals in her bill, rather than politicizing it.

"That was a political line of questioning involving Peter MacKay. I mean, come on, we should move forward."

"There's a very good chance it would," Ms. Ambrose replied. "I have seen people appointed who came with incredible CVs and then do things that surprised everyone. ...

"You can't control who applies. ... So at the end of the day, regardless of who gets through those committees, we need them to have training."

The House of Commons voted unanimously last month to fast-track Ms. Ambrose's bill and send it straight to committee. However, it is unclear if the government will support the bill as it stands.

In an e-mail statement on Tuesday, Status of Women Minister Maryam Monsef said she welcomed Ms. Ambrose's "understanding and appreciation of the severity of the systemic barriers faced by survivors of sexual assault," but did not further clarify where she stands on the bill, beyond saying she is "pleased" the committee is studying it.

"I look forward to the discussion on this bill as it progresses through Parliament," Ms. Monsef said in the statement.

Ms. Monsef has not indicated whether she will support the bill, but told the committee last month that the government does not have the jurisdiction to require training.

The 2017 budget proposes $2.7-million over five years for education, ethics and conduct programs for Canadian judges, including training. 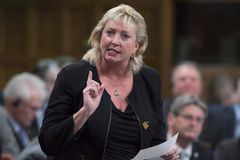 British Columbia judge’s handling of sexual-assault trial sparks complaint
March 23, 2017
Rona Ambrose says judges must educate themselves in unfamiliar law
March 9, 2017
Follow Michelle Carbert on Twitter @michellecarbert
Report an error Editorial code of conduct
Due to technical reasons, we have temporarily removed commenting from our articles. We hope to have this fixed soon. Thank you for your patience. If you are looking to give feedback on our new site, please send it along to feedback@globeandmail.com. If you want to write a letter to the editor, please forward to letters@globeandmail.com.
Comments