The government is extending a military mission in Ukraine for two years to fight back Russia-backed separatists in the eastern part of the country. Russia is not pleased, calling the extension "counterproductive." Foreign Affairs Minister Chrystia Freeland, meanwhile, is warning of the dangers of Russian disinformation campaigns, as pro-Moscow websites claim her grandfather was a Nazi collaborator.

The Liberal Party of Canada says it has full discretion to approve or reject local candidates as it sees fit, even as Prime Minister Justin Trudeau insists nominations are decided by local Liberal members. The statements come as candidates are decided for upcoming by-elections, with rivals claiming they were pushed aside for candidates favoured by Mr. Trudeau.

The Liberal government has been on a cheque blitz, with Liberal MPs even handing out government funding in ridings that are represented by opposition members.

A majority of respondents to a Nanos poll say they are fine with the Liberals running deficits. The next budget is expected in weeks.

And the Prime Minister has been dragging his feet in appointing parliamentary watchdogs, with four of eight posts empty, including the chief electoral officer and the ethics commissioner.

U.S. President Donald Trump's immigration ban targeting citizens of seven Muslim-majority countries is now a ban targeting citizens of six Muslim-majority countries. The executive order will take effect starting March 16. Major differences include dropping Iraq from the list of countries and not suspending processing for Syrian refugees indefinitely. Republicans who had criticized the earlier version of the plan offered some praise of the new ban while Democrats blasted it for essentially being more of the same.

The other major news in Washington was House Republicans' introduction of a bill that would repeal and replace Obamacare. The explainers at Vox have broken down the main differences between the current legislation and the bill, which would defund Planned Parenthood. Expect changes as the healthcare debate continues. Some Senate Republicans have come out against the proposed bill's repeal of Obamacare's medicaid expansion while some in the House Freedom Caucus say it's Obamacare-lite.

A hallmark of this Republican administration and Mr. Trump's managerial style has been the existence of competing power structures. FiveThirtyEight mapped out the key players and identified eight different wings all jockeying for supremacy.

One person not belonging to any group in the administration is former Exxon Mobil CEO and Secretary of State Rex Tillerson. He's largely been absent from the spotlight, enabling Mr. Trump's son-in-law Jared Kushner to play the role of shadow diplomat in the administration's first two months.

And in other immigration news, the Trump administration has targeted Silicon Valley's favourite visa, making it harder for high-skill workers to work in the U.S. This is already proving to have a ripple effect on Canada, with the Canadian tech sector eagerly opening its arms to talented workers.

John Ibbitson (The Globe and Mail): "With one Canadian in five an immigrant, mostly from Asian or Pacific countries, and with immigrants and the children of immigrants dominating the suburban ridings that determine the outcome of federal elections, any perception of being anti-immigrant is an act of political self-immolation."

Aisha Ahmad and Minelle Mahtani (The Globe and Mail): "As immigration chaos spirals in the United States and these bizarre episodes escalate, there are serious, long-term consequences. Border officials have an enormous amount of discretion in detaining travellers and denying entrance, and denial of entrance taints a travel record. So, one dysfunctional interaction with an aggressive border official can actually impede a traveller's freedom around the world for years."

Stephanie Carvin (The Globe and Mail): "It is a tragic irony that Mr. Trump's actions are likely to make the United States less safe, while tearing families apart and undermining counterterrorism efforts at home."

Andrew Coyne (National Post): "Each of the different ways [the Conservative leadership candidates would] pay for their plans is a good idea in itself: we'd be well advised to cut wasteful spending, tax carbon, and eliminate useless tax expenditures, even if we weren't planning on cutting income taxes; likewise, it is a good idea to tax consumption, as with the GST, rather than income. So why not do … all of them? How much could income taxes be cut then?"

Martin Patriquin (iPolitics): "The Liberal party continues this electoral shell game precisely because it hasn't suffered a bit politically because of it. Just the opposite, in fact. On paper, the open nominations policy allows the party to be on the side of angels. In practice, it can champion the dirty status quo by shoehorning star candidates into safe ridings. It's less 'Real Change' than plus ça change." 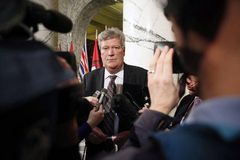 Surge in Canadian home prices could be ‘precursor’ to slump: OECD Subscriber content
June 15, 2017
Follow us on Twitter @globeandmail Opens in a new window
Report an error Editorial code of conduct
Due to technical reasons, we have temporarily removed commenting from our articles. We hope to have this fixed soon. Thank you for your patience. If you are looking to give feedback on our new site, please send it along to feedback@globeandmail.com. If you want to write a letter to the editor, please forward to letters@globeandmail.com.
Comments