Foreign Affairs Minister Chrystia Freeland has firmly rejected an offer from Russia to lift a travel ban against her if Canada removes economic sanctions and visa bans imposed over Moscow's 2014 annexation of Ukraine's Crimean Peninsula.

"There is no quid pro quo for aggression and illegal action on their part," Ms. Freeland's communications director Joe Pickerill told The Globe and Mail on Wednesday.

The Russian news agency Sputnik quoted an unidentified Russian Foreign Ministry official as saying the Kremlin was open to allowing Ms. Freeland to travel to Russia but only if Canada lifted economic sanctions and travel bans against Russia.

"She was included in the sanctions list as a response measure, as Canada introduced restrictions against Russia, including officials. The issue of removing her from the response sanctions is an issue of reciprocity and the mirror principle," the Foreign Ministry official told the news agency. "We are ready to co-operate with Canada in all areas, to improve relations, to end sanctions wars. But it was not us who started them. The question should be addressed to Ottawa."

After she was sworn in as Foreign Affairs Minister on Tuesday, Ms. Freeland said that whether she will be able to travel to Russia was not up to her.

"That's a question for Moscow," she told reporters. "I am a very strong supporter of our government's view that it is important to engage with all countries around the world, very much including Russia."

What remains uncertain is whether incoming U.S. president Donald Trump might remove the U.S. sanctions, which would leave Europe and Canada in a difficult situation. Mr. Trump praised Russian President Vladimir Putin at a news conference in New York on Wednesday.

"If Putin likes Donald Trump that is an asset, folks. That's good. Now I don't know if I am going to get along with Vladimir Putin. I hope I do but there is a good chance I won't," he said.

For now, the incoming Trump administration appears willing to keep the sanctions in place, according to Mr. Trump's nominee for secretary of state, Rex Tillerson, the former CEO of Exxon Mobil, which has extensive oil interests in Russia.

"I would recommend maintaining the status quo until we are able to engage with Russia and understand better what their intentions are," Mr. Tillerson said during Senate confirmation hearings on Wednesday. However, he also said that U.S. sanctions disrupted American businesses overseas.

Ms. Freeland, a former financial journalist who worked in Moscow and is a strong supporter of Ukraine, was blacklisted in 2014 along with 12 other Canadians, including Irwin Cotler, then a Liberal MP; Paul Grod, president of the Ukrainian Canadian Congress; Conservative MP James Bezan and Conservative Senator Raynell Andreychuk.

After Moscow imposed sanctions on her, Ms. Freeland posted on Twitter that she considered it "an honour to be on Putin's sanction list."

Ms. Freeland is also known to be a supporter of the efforts by all political parties to adopt a U.S.-style Magnitsky act that would freeze assets and impose travel bans on Russian human-rights abusers.

As foreign affairs minister, Stéphane Dion objected to Canada adopting such an act, insisting the country already has laws to deal with corrupt officials. He was also concerned that such a law would damage Canada's effort to re-engage with Russia.

The Liberals, Conservatives and New Democrats all promised in the 2015 general election to adopt a Magnitsky-type act. The U.S. law is named after Russian whistleblower Sergei Magnitsky, who accused Russian law-enforcement and tax officials of a massive tax-fraud scheme prior to his November, 2009, death in a notorious Moscow jail. His family and friends say he was tortured, beaten and denied critical medical treatment shortly before he died.

The House of Commons foreign affairs committee is currently conducting statutory parliamentary reviews of the Freezing Assets of Corrupt Foreign Officials Act as well as the Special Economic Measures Act, which allows Canada to impose sanctions against foreign governments for grave breaches of international peace. This was the law that Canada used to impose economic sanctions against Russia for its annexation of Crimea.

The Russian embassy in Ottawa has warned that any move to adopt Magnitsky provisions would harm relations between the countries. When U.S. President Barack Obama signed the Magnitsky Act into law in 2012, the Kremlin retaliated by banning adoption of Russian babies by American citizens.

In the past year, the Kremlin has also stepped up pressure against Anglo-American financier William Browder, who has led an international campaign to get other countries to adopt a Magnitsky-style act. He has been in Canada on several occasions since the Liberals came to power, lobbying the government and MPs to pass such a law. He is expected to meet Ms. Freeland at the World Economic Forum in Davos, Switzerland, next week.

Mr. Magnitsky worked for Mr. Browder, who was instrumental in getting the U.S. Congress to adopt the law in 2012. The Magnitsky Act infuriated the Kremlin, and Russian officials have repeatedly attacked Mr. Browder and accused him of tax fraud, which he denies. 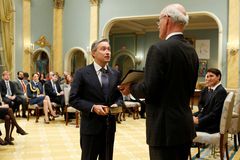 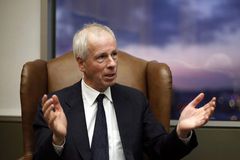 Dion's parting words: 'I wish Chrystia the best of luck'
January 11, 2017
Follow Robert Fife on Twitter @RobertFife
Report an error Editorial code of conduct
Due to technical reasons, we have temporarily removed commenting from our articles. We hope to have this fixed soon. Thank you for your patience. If you are looking to give feedback on our new site, please send it along to feedback@globeandmail.com. If you want to write a letter to the editor, please forward to letters@globeandmail.com.
Comments