Russian authorities are asking Canada to extradite an alleged war criminal of Ukrainian ancestry who's lived here for more than 60 years, a request that appears designed to embarrass Ottawa while relations with Moscow remain frosty over President Vladimir Putin's aggression in Ukraine.

The Investigative Committee of the Russian Federation, a law enforcement body that reports only to Mr. Putin, on Friday called on Canada to deliver Vladimir Katriuk, a Quebec beekeeper now in his 90s, to Moscow so he can be tried for alleged war crimes.

Jewish groups have long urged the deportation of Mr. Katriuk, a former member of a Ukrainian battalion of the Waffen SS, the elite Nazi troops, and they increased their demands for action in recent years after new scholarly research that appears to tie him to a 1943 massacre of villagers in Belarus, a former Soviet republic.

In 1999, the Federal Court ruled Mr. Katriuk obtained Canadian citizenship under false pretenses by not telling authorities about his collaboration with the Nazis but could find no evidence he committed atrocities. In 2007, the Harper cabinet decided not to revoke his citizenship.

Russia's request shines a spotlight on a case that has upset Jewish Canadians and war-criminal hunters for years. In 2015, the Simon Wiesenthal Center's Annual Nazi War Criminals Report ranked Mr. Katriuk second on the list. Back in 2012, Conservative MP Mark Adler suggested via Twitter that Mr. Katriuk needed to leave. "Vladimir Katriuk hid his past as a Nazi collaborator. We must never forget. Collaborators' lives shouldn't end on a soft Canadian pillow."

Given the seriousness of his alleged war crimes "and the fact that his accomplices were proven guilty and faced the death penalty for exterminating civilians of the Khatyn village in Byelorussia, an extradition request would be logical for bringing the Nazi collaborator to court," Kirill Kalinin, second secretary of the Russian embassy's political section, said in a statement.

"We do count on the full and impartial support of the Canadian government. We will always remember that Canada was our ally in fighting Nazi Germany."

On Friday, the Harper government refused to address the request and instead immediately shifted the topic back to to Russia's aggression in Ukraine.

"While I cannot comment on any specific extradition request, to be clear, we will never accept or recognize the Russian annexation of Crimea or the illegal occupation of any sovereign Ukrainian territory," said Clarissa Lamb, press secretary for Justice Minister Peter MacKay.

Canada and Russia have suspended all but low-level diplomatic relations since Mr. Putin took Crimea last year. Stephen Harper has made support for Kiev a major pillar of his foreign policy and famously told the Russian leader to "get out of Ukraine" during an encounter at a Group of 20 meeting in Brisbane last fall.

David Matas, honorary legal counsel with B'nai Brith Canada, said he'd like to see Mr. Katriuk leave Canada. "I don't think Russia should have invaded Ukraine, but I still think we should get rid of Katriuk."

He believes the Russians like this case because "it plays into their narrative" about fascist elements in Ukraine.

In 2012, the Harper government reportedly pledged to re-examine the Katriuk case but on Friday Mr. MacKay's office would say nothing about this, citing privacy law. Ms. Lamb said options for war-crimes cases "include extradition, criminal prosecution in Canada under the Crimes Against Humanity and War Crimes Act, revocation of Canadian citizenship, deportation, and surrender to an international tribunal."

Ukraine minister wants Canada to send peacekeepers in conflict with Russia
May 12, 2018 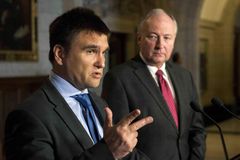 Former PM Jean Chrétien to meet with Vladimir Putin in Moscow
May 12, 2018 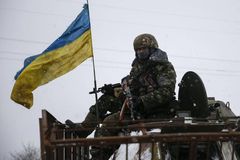