Forget about whether the Red Wings once "drafted" young Marc Nadon to their farm system. There are more substantial issues at play here. Justice Nadon's elevation to the Supreme Court of Canada revives memories of his role once in a case related to the 1994 Rwanda genocide, when Hutu extremists systematically murdered some 800,000 Tutsi civilians. How was Canada involved?

Eighteen months before the genocide, a Rwandan Hutu fanatic named Leon Mugesera made an inflammatory anti-Tutsi speech to a Hutu gathering. Mr. Mugesera's own ruling party repudiated his incendiary remarks. He was forced to flee the country, landing in Canada and settling in Quebec City.

The Canadian government soon began proceedings to deport Mr. Mugesera based on his incitement to genocide. In 2000-01, after a hearing of the Immigration Appeal Division, his case came to the Federal Court trial division (a body that no longer exists), presided over by Justice Marc Nadon. Justice Nadon had to deal with several issues, some factual, some of law.

As virtually every historian of Rwanda agrees, the 1994 genocide in Rwanda was the culmination of 35 years of meticulously documented discrimination and violence by the Hutu dictatorship of Rwanda against the country's Tutsi minority.

In 1990, a group of exiled Tutsi launched an invasion into Rwanda. The Hutu government chose to retaliate against all Tutsi, employing dehumanizing anti-Tutsi propaganda and launching a series of massacres of Tutsi civilians. It was in this inflamed context that Mr. Mugesera, in November 1992, made his  speech to a large Hutu gathering. He was not subtle in what he expected of his audience.

Speaking of those Tutsis who fled Hutu-led pogroms at independence thirty years earlier he said, "The mistake we made in 1959 ... is to let you leave." Had they instead all been killed, they could never again be a threat.

Alluding  to the hoary Hutu myth of the Tutsis' foreign roots he said: "I am telling you that your home is in Ethiopia, that we will send you by the Nyabrongo River [a source of the Nile flowing from Rwanda into Ethiopia] so you can get there quickly."  He did not mean by boat.

No one who knows Rwandan history can have any doubt about Mr. Mugesera's purpose.

The immigration court had heard the late Alison Des Forges of Human Rights Watch, one of the world's foremost experts on Rwandan history, testify that violence against Tutsis immediately followed Mr. Mugesera's speech. Mr. Mugesera had  denied anything of the kind.

Surprisingly, Justice Nadon accepted the testimony of the accused over the expert and found it unreasonable to believe that Mr. Mugesera's speech led to immediate violence. At the same time, however, Justice Nadon held that it was not unreasonable to interpret Mr. Mugesera's speech as inciting murder and indeed genocide 18 months later, so he could still be deported from Canada. On the core legal issue – whether the speech itself was a crime against humanity – Justice Nadon seemed indifferent to the larger context and said that a verbal address could not constitute such an offence.

Both sides appealed to the Federal Court of Appeals, where a three-judge panel of the Court adopted Mr. Mugesera's fraudulent reading of Rwandan history. Building on Justice Nadon's decision, it found that Mr. Mugesera had not committed a crime against humanity and that his repeated threats against the Tutsis did not mean what they said.

This unexpected judgement, following the Nadon ruling, shocked the Canadian human rights community, which included Irwin Cotler, then minister of justice and himself well-versed in the 1994 genocide. The government, still anxious to deport Mr. Mugesera, appealed the decision to the Supreme Court of Canada. According to Prof. Noah Novogrodsky, then director of the University of Toronto Law School's  international human rights program and an intervener at the Supreme Court,  "we were saying that Canada should not be a safe haven for war criminals and that inciting genocide means that this person is deportable as a war criminal."

The Supreme Court concurred. In 2005, a unanimous 8-0 decision  contradicted both Justice Nadon's decision and that of the Federal Court of Appeals panel. The Court agreed there was substantial evidence that Mr. Mugesera had indeed incited genocide in Rwanda and had committed crimes against humanity, repudiating Justice Nadon's finding on the issue. After Mr. Mugesera spent seven more years milking Canada's judicial appeals system, the Harper government last year finally deported Mr. Mugesera to Rwanda to stand trial.

But if Mr. Mugesera is gone, the reverberations of his case still linger. Would Justice Nadon have made a different finding a dozen years back knowing what he does today? Will he resist revisionist histories that seek to cover up mass crimes? Will he be open to contemporary understandings of international human rights law? We have no choice but to hope so. 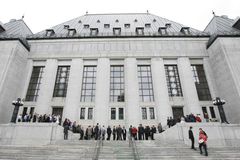