Saskatchewan Premier Brad Wall is calling on Prime Minister Justin Trudeau to suspend his plan to bring 25,000 Syrian refugees to Canada before the end of the year, revealing a growing unease among this country's leaders in the wake of the terrorist attacks in Paris.

Some politicians are concerned about Mr. Trudeau's marquee election pledge to vastly increase the speed and scale of Canada's intake of refugees. The mayors of Toronto, Quebec City and Montreal have all expressed reservations about Mr. Trudeau's timeline, and the premiers of B.C. and Quebec have stressed that security must be considered. But Mr. Wall has come out strongest against the plan.

In a letter to Mr. Trudeau Monday, Mr. Wall wrote that he is "concerned" that swiftly bringing large numbers of asylum seekers into the country "could severely undermine the refugee screening process."

"The recent attacks in Paris are a grim reminder of the death and destruction even a small number of malevolent individuals can inflict upon a peaceful country and its citizens," he wrote. "Surely, we do not want to be date-driven or numbers-driven in an endeavour that may affect the safety of our citizens and the security of our country."

Speaking to reporters in Regina, Mr. Wall also pronounced himself in favour of continuing Canada's bombing campaign against the Islamic State, which Mr. Trudeau has promised to end.

"As a citizen, I would rather they continue the air strikes. I would rather Canada continue the fight. That's Canada's history, that's our tradition. When tyranny threatens freedom-loving people anywhere, Canada has responded, yes, with a humane response. But Canada also fights," he said.

The Paris attacks Friday, for which the Islamic State claimed responsibility, left 129 people dead. There has been no solid proof any of the terrorists were refugees, but a passport found near the body of one of the perpetrators appeared to belong to someone who had come from Syria via Greece.

There is little Mr. Wall or his fellow critics can do to stop Mr. Trudeau's plan. But how he manages their unease could be the first major test of the Prime Minister's promised new era of co-operative federalism.

In Quebec, an online petition calling for Ottawa to suspend its plan has picked up more than 61,500 signatures.

Quebec City Mayor Régis Labeaume urged Ottawa to pause in the face of public worries over the refugees. "Rushing can lead to chaotic situations," he said Monday. The mayor of Montreal, Denis Coderre, said Canada should "stay the course" on refugees, "but we don't necessarily have to have 25,000 in 45 days."

Toronto Mayor John Tory said he is still in favour of "having some of these people come to Canada," but described Mr. Trudeau's plan to bring a large number in with such a tight timeline as a "political promise."

"These things have to be done properly and thoroughly and carefully. I think everybody would expect that," he said. "Political promises should be secondary at all times to making sure that we do things in the best way and in the right way for the Canadian people."

Mr. Trudeau's government signalled Monday it will not delay the Syrian refugee effort.

In an interview with The Globe and Mail, Public Safety Minister Ralph Goodale said refugees can be brought to Canada without jeopardizing the country's security. "We're taking all factors into account," he repeated twice when asked whether extra screening is required after the Paris attacks.

Mr. Goodale said this country is better situated than Europe to carefully select those to allow entry. He noted that a flood of refugees overwhelmed Europe and left them scrambling to process people whereas Canada, separated by more than 9,300 kilometres from Syria, has the margin of manoeuvre to screen more judiciously.

"We have the advantage of being able to plan the process, which we are trying to do. Whereas they [Europeans] were dealing with spontaneous, ad-hoc, unexpected chaos. And they had to cope with obviously a very large and difficult situation all at once with no ability to cope with it," he said.

Both Ontario and Alberta said they would do their part to implement Mr. Trudeau's plan.

Ontario Health Minister Eric Hoskins said Monday the province will stick to its commitment to bring in 10,000 Syrian refugees. He added that he trusts the federal government to do the proper security checks. Asked whether the Paris attacks changed the government's thinking on refugees, he said, "Not at all, and I don't think it changes the public's resolve, either."

Alberta Premier Rachel Notley said her province is prepared to help settle as many as 3,000 refugees. "We need to move forward on the basis of humanity, not on the basis of fear," she said in Edmonton. "The world is a small place these days and we can do our part, we need to do it safely, we need to keep the safety of Canadian and Alberta families in perspective, but we need to balance that very clearly against the fact that we are an open society and one that's going to reach out to people in need."

Quebec Premier Philippe Couillard walked a fine line. He reiterated his province's commitment to taking in more than 5,700 refugees – with the proviso that Ottawa carry out security checks on them first. Mr. Couillard, who has been vocal in defending the refugees as victims of terrorism themselves, said Ottawa's security checks are essential, but shouldn't be used as an excuse to block the refugees from coming. "Concerns over security must not become an alibi or justification to say 'no' to refugees," he said on Monday.

Quebec Immigration Minister Kathleen Weil raised doubts about whether Mr. Trudeau's end-of-year deadline to bring in Syrian refugees was realistic. "I'll be honest, I think it's impossible to proceed with the welcome by the end of the year and people know it," she said on Monday.

British Columbia Premier Christy Clark said she could understand both sides of the argument.

"I don't know whether or not that [25,000] number is the right one. I just know that Canadians want to know that the security processes are working well," she said. "Having said that, I understand that urgency that people are feeling about inviting these people who are from one of the worst, war-torn regions in the world, who are facing the kind of violence every day that unfolded in Paris."

South of the border, seven governors are trying to stop Syrian refugees from entering their states. The United States is planning to take in less than half as many refugees as Canada, despite a population 10 times larger than Canada's, but even that modest amount is too much for some Republican politicians.

By contrast, neither Mr. Wall nor any of the other Canadian politicians who urged Mr. Trudeau to slow down the acceptance of refugees took such drastic measures.

Mr. Wall said Saskatchewan is ready to accept refugees, just not at the pace Mr. Trudeau is planning.

With reports from Oliver Moore in Toronto, Justin Giovannetti in Edmonton, Brent Jang in Delta, B.C., Daniel Leblanc in Ottawa

Trudeau to make economic case for taking in refugees at G20 summit
November 12, 2015 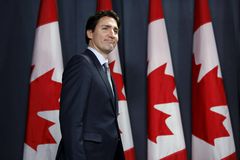 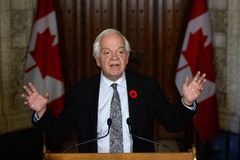 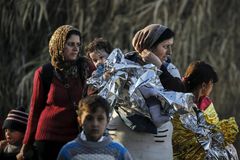 Follow Adrian Morrow, Ingrid Peritz and Steven Chase on Twitter @adrianmorrow @iperitz @stevenchase
Report an error Editorial code of conduct
Due to technical reasons, we have temporarily removed commenting from our articles. We hope to have this fixed soon. Thank you for your patience. If you are looking to give feedback on our new site, please send it along to feedback@globeandmail.com. If you want to write a letter to the editor, please forward to letters@globeandmail.com.
Comments