The Saudi Arabian government is defending the recent deployment of Canadian-made armoured vehicles against residents of the kingdom's Eastern Province, saying security forces found it necessary to use "military equipment" to fight terrorists who threatened the safety of its population.

The Saudi embassy in Canada, however, is trying to explain to Canadians what happened in terms it hopes this country will understand.

In a statement provided to The Globe and Mail, the embassy likened Riyadh's use of force in this case to the October, 2014, incident in Ottawa where Canadian authorities killed a lone gunman who stormed Parliament Hill after fatally shooting a soldier at the National War Memorial.

"It is the right of the Government of the Kingdom of Saudi Arabia to use its military equipment to fight the terrorist groups of Awamiyah to protect the civilians," the Saudi embassy said.

The embassy reminded Canadians that on October 22, 2014: "Canadian authorities did fight the attacker and killed him on the spot to protect Canadian civilians. Fighting terrorism and protecting innocent civilians are not human-rights violations."

The House of Saud's use of combat machines against its Shia population goes to the very heart of the controversy over whether the Trudeau government is violating Canada's weapons export control rules by allowing arms exports to Saudi Arabia – in particular a $15-billion General Dynamics sale of weaponized armoured vehicles it just authorized last year.

These rules call for restrictions on arms exports to countries with a "persistent record of serious violations of the human rights of their citizens." Shipments are supposed to be blocked unless there is "no reasonable risk" the buyer could turn arms against its own population.

In late July, even before Ms. Freeland announced she would probe the matter, the Canadian government issued a statement criticizing Saudi Arabia's handling of what it called "escalating violence in eastern Saudi Arabia" and cautioning that while Ottawa recognizes Riyadh has "security challenges," these "must be addressed in a manner that abides by international human-rights law."

The Globe and Mail asked the Saudi embassy recently whether the kingdom had in fact made any promises to Canada about not using Canadian-made military equipment against Saudi civilians.

In reply, the embassy argued that Saudi Arabia was fully justified in deploying its military equipment in Eastern Province.

"The terrorist groups in Awamiyah are equipped with military equipment and they are attacking civilians in the area," the embassy said in a statement.

"The Saudi government's depiction of military operations in civilian areas as being part of its war on terrorism has become routine, and increasingly suspect," he said.

"The fact is that there are too many red flags. A country consistently found to be among the very worst human-rights violators on the planet is now categorically denying any human-rights violations in the siege of Awamiyah. The Canadian public needs to know how much credence Ottawa gives to this claim and whether it is consistent with its own findings."

Al-Qatif has long been described by experts as an area under lockdown. It's a hotbed of opposition to the reigning House of Saud and the Saudis frequently cite terror threats when they go after the area's militants. The best-known resident from the area may be Sheik Nimr al-Nimr, the populist dissident Shia cleric whom the Saudi government killed in January, 2016, during a wave of mass executions.

Some Shia dissidents have become militant in recent years, wielding guns or Molotov cocktails, after facing a harsh crackdown by the Saudis during protests that coincided with Arab Spring uprisings across the Middle East in 2011.

The most recent conflict in Eastern Province began to flare up in early 2017, when Saudi Arabia began to raze a minority Shia Muslim neighbourhood in al-Qatif. Riyadh said it wanted to redevelop the ancient neighbourhood of Al-Masora for health and safety reasons. Shia activists, however, said the Saudis wanted to eliminate a hideout for militants.

The Saudi embassy told The Globe that the latest clash began when workers preparing the area for redevelopment came under heavy fire and attacks by "explosive devices" – incidents they blamed on "terrorist groups from within the neighbourhood."

The embassy said these attacks killed two Saudis and injured 10 civilians, including one woman and two children.

Shia activists, for their part, have told Human Rights Watch that the recent violence took the lives of more than a dozen people, in addition to five armed militants who clashed with the Saudi authorities.

The Saudi embassy said Riyadh is determined to fight terrorism regardless of whether the threat comes from the Islamic State, the radical Sunni Islamist militant group or Shia terrorists that Riyadh alleges are funded by Iran.

Ali Adubisi, director of the Berlin-based European-Saudi Organization for Human Rights, said the Saudi government criminalizes any form of dissent. Many civilians were targeted and killed in Awamiyah, he said, while the government is saying it's fighting armed men. "Portraying themselves as the protectors of civilians in Awamiyah is a mockery."

Human Rights Watch said in a statement this week that residents in Awamiyah told them Saudi security forces fired into populated areas from Al-Masora, killing residents, occupying a public school, closing clinics and pharmacies and preventing essential services such as ambulances from reaching the area. The group called for an investigation into whether Saudi authorities "used excessive force in Awamiyah."

Opinion
How many more Saudi videos does Ottawa need to see?
August 13, 2017 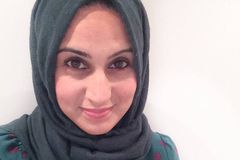 Trudeau government registers concern with Saudi Arabia over apparent armoured-vehicle use
August 7, 2017
Follow Steven Chase on Twitter @stevenchase
Report an error Editorial code of conduct
Due to technical reasons, we have temporarily removed commenting from our articles. We hope to have this fixed soon. Thank you for your patience. If you are looking to give feedback on our new site, please send it along to feedback@globeandmail.com. If you want to write a letter to the editor, please forward to letters@globeandmail.com.
Comments