School districts, a police department and the National Hockey League are just some of the groups preparing for the new gender-neutral lyrics of O Canada, which could get Rideau Hall's seal of approval just in time for Friday's start of the Winter Olympics in South Korea.

Once the legislation changing the lyrics receives royal assent from Governor General Julie Payette, it will be the first time the official wording has been altered since the song was enshrined as the country's national anthem in 1980.

The update applies only to the English version and will see the second line "in all thy sons command" replaced with the gender-neutral "in all of us command."

Ryan Bird, a spokesman for the Toronto District School Board, said once the change is official, schools will be notified to explain the updated lyrics, and to encourage them to either record or obtain recordings of the new version at their earliest convenience.

David Nelson, associate superintendent of the Vancouver School Board, said his school district will also adopt the new lyrics once they are officially changed.

"The revised lyrics would be sung at school and district events where the anthem is sung," Nelson said.

Toronto police occasionally stand for the national anthem before official events, said spokesman Mark Pugash, adding that the force "has a plan" to make sure the new lyrics are observed.

"I'm not going into specifics, because there are a variety of formal and informal ways that we will make sure that our people get the message," he said.

Sen. Frances Lankin, who sponsored the bill in the Senate, said she looks forward to hearing the new lyrics sung from the podium during the Winter Olympics in Pyeongchang.

"Probably, some (athletes) will forget in the moment of excitement. But I know a number of the athletes are very, very excited about this," Lankin said.

The Canadian Olympic Committee has asked athletes competing in the games to use the new wording.

Heritage Minister Melanie Joly said the she is "extremely proud" of the new wording.

"We think that as a progressive country this is great news," she said.

A spokesman for Joly later said the bill would likely receive royal assent by the end of the week.

Not everyone is happy with the revision, however: the far-right website The Rebel has launched a petition to "save O Canada," asking supporters to help it commission a public opinion poll into whether Canadians approve of the change.

Conservative Leader Andrew Scheer said he was disappointed with how little consultation took place around the change but said he will sing the new lyrics once they become official.

"I will respect the law when it's changed," Scheer said, adding that he himself did not support amending the lyrics and that many Canadians are upset with how quickly the bill passed through Parliament.

"It does not belong to any one member of Parliament or any one political party. It's a national institution. It's our national anthem that we've been singing for decades."

The revised lyrics will be introduced as part of the normal reprinting of government material, so there will be no additional costs, said David Larose, a spokesman for the Canadian Heritage department.

Online versions will be the first to change, after which the government will inform "partners and stakeholders" so they can make their own revisions, Larose said.

The change is the culmination of a years-long effort by former Liberal MP Mauril Belanger. Belanger was diagnosed with ALS, also known as Lou Gehrig's disease, following the 2015 election.

He died two months after the House of Commons passed the bill in June 2016, but the Senate took until last week to approve the new wording.

The words to O Canada have changed on several occasions, though not since 1980.

There have been at least 10 attempts since then to amend the lyrics to make them more gender inclusive, including one earlier attempt by Belanger.

The anthem's music and French lyrics were written in 1880, with English following 28 years later.

Robert Stanley Weir, who wrote the English version, added "in all thy sons command" in place of the original "thou dost in us command" in the early 20th century in what is believed to have been a salute to men in the Armed Forces as the First World War approached. 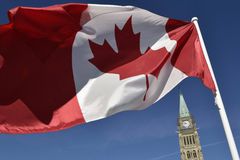