I confessed in this space three and a half years ago that I was among those who openly wept when Barack Obama was elected president of the United States. I had closely followed the plight of black Americans ever since I toured the deep southern USA in my late teens, a time when the civil rights movement was in its infancy, segregation was the law, violence against blacks was The American Way, and Martin Luther King was not yet the FBI's Enemy Number 1.

That a black man could win the presidency was literally a dream come true. Everyone in the world knew something truly important happened on November 2, 2008. But no one knew exactly what that was, and almost four years later, it's still hard to know, harder than anyone expected.

It would be the height of blind romanticism to believe that American racism had finally ended and that post-racial America had begun. On the contrary, racism is alive and well and living in just about every police station in the USA. It would have been foolhardy to expect age-old prejudices and institutional realities to change overnight. But what in fact has improved in the past almost four years?

Begin with the basics. The President's failure to take the bold steps necessary to reverse the recession he inherited from George Bush left black Americans no better off than before he took over. If his presidency hasn't benefitted America's most exploited minority, how can it be celebrated? If the least privileged weren't protected from Wall Street's massive debacle, what was the point of making history? As one middle class black woman told the President to his face at a public forum:

"Quite frankly, I'm exhausted. Exhausted of defending you, defending your administration, defending the man for change I voted for, and deeply disappointed with where we are right now. I've been told that I voted for a man who said he was going to change things for the middle class. I'm one of those people and I'm waiting, sir, I'm waiting. I don't feel it yet. While I thought it wouldn't be a great measure, I would feel it in some small measure."

She was among the lucky ones. In Obama's America, one in four blacks is or has been in jail. Almost one in four lives in poverty. The black median income is under $30,000, the national median is $50,000. The median wealth of white households is 20 times that of blacks. Most blacks live in black-majority neighbourhoods, many very poor, and their kids go to black-majority schools, many very poor. There's a large abandoned black underclass, trapped by unemployment or low incomes, consigned to shabby neighbourhoods and schools, and another large group that works in integrated, mainstream America but lives in black America.

Of course it's important not to over-simplify or deny the real progress that has finally been made by many African Americans. A black middle class has been evolving for generations, accelerating in recent decades. There are many successful black business people (one of the richest, Herman Cain, ran for the Republican nomination), black Americans can now be found in every walk of life, and George Bush appointed Colin Powell and Condoleezza Rice to unprecedented positions in his administration.

And yet for centuries, every single black American was aware of the limits of his or her American-ness. Every black American realized that, unlike every white person, the American dream did not belong to them. Although upward social mobility for whites was always exaggerated and is now the exception, for whites (at least for the males among them) the theoretical future has always been open and boundless. Any white man could grow up to become president of their country. No black ever could. Then came Obama.

First he came with his hopey-changey thing, creating the expectation that for blacks, the American dream, in poet Langston Hughes' sardonic phrase, would no longer be deferred. Then he came with his economic team, fierce believers in exactly the kind of neoliberal economics that had caused the economic meltdown in the first place. Then he came with a Secretary of Education who embraced the worst of conservatism's nostrums for fixing America's schooling crisis. Then he came with his baseless conceit that under him, bipartisanship could prevail in a polarized Washington, D.C. Then he came with his repeated moves to the right to accommodate unyielding Republicans, a cult wholly in thrall to a lunatic fringe ideology.

So if you can't blame Barack Obama for the plight of black America that he inherited — and Hispanic America too, and many poor whites as well, and the scrunched, anxiety-filled middle class — can we not justly say he failed to improve their condition?

Then there was the way he let down the entire world he once enthralled. Goodbye to the Nobel Peace Prize. Hello to those devilish little killer drones zip-zapping around the world casually murdering alleged American enemies. Goodbye to a knowledgeable view of Africa by the son of an African scholar. Hello to the kind of simple-minded view we might have expected from George Bush and that completely ignored the central role of the rich world in exacerbating the continent's troubles. Goodbye to his early promises to the Arab world. Hello to the same old, same old pandering to the pro-Israel lobby.

So many hopes. So much disappointment.

On the other hand, who can resist the man, with his huge, beaming, beguiling smile, his wonderful way with a funny line, his total comfort in his own skin, his extraordinary wife. How can you not believe, despite everything, that he in fact knows what needs to be done and would do it if only given half a chance?

And how do you weigh his explicit endorsement of same-sex marriage, in its way as unthinkable, as liberating an act as for the United States as the election of a black president itself. As Canadian lawyer and activist Josh Scheinert aptly described him in the Huffington Post, "Obama: the hero for Americans of all colors of the rainbow."

So despite it all, despite himself and his heartbreaking record, he simply must be re-elected. The alternative, after all, is unthinkable. It can be summed up in three words: The Republican Party.

Obama campaign manager goes for the jugular
May 14, 2012 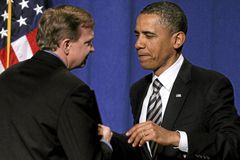