The Conservative Party may win every single seat in the 905 next election or they may not win a single one in the vote-rich ring around Toronto. In either case, Tuesday's cabinet shuffle will have next to nothing to do with the outcome.

So why in the world are otherwise smart pundits claiming otherwise? The shuffle is heralded as a "major boost for Toronto" by the Star, and this paper's Ottawa bureau chief proclaims that "Harper lays stakes in Toronto suburbs with pre-election shuffle."

It all sounds very dramatic and game-changey. It really, really isn't. While Peter Kent's new albatross that is the environment portfolio under Stephen Harper has been dealt with adequately by others, I thought focusing on how Julian Fantino may, or may not, play a role in swinging 905 seats to the Conservatives would be instructive.

Ladies and gentlemen: Mr. Seniors, Julian Fantino. Sure, the seniors portfolio is "about as junior as cabinet jobs come" but "seniors are important for the Conservative political strategy, however, since older voters tend to vote Conservative more than do younger voters". A fact - seniors do vote Conservative in greater numbers than younger voters. But remember - this is all about a massive breakthrough in the 905 that leads to a historic Conservative majority. That's the thesis being posited.

So let's assume that somehow Fantino makes seniors even more likely to vote for the Conservatives than they were pre-Fantino (a fairly shaky assumption given that I'm not sure many seniors would say "I was going to vote Liberals but damn, the job Fantino did with that meaty seniors portfolio, doing all those important things that seniors ministers do... Why it just changed my mind"), it really won't make much of a difference in the 905.

There are 20 ridings in the 905. Thanks to the still brilliant site Pundits' Guide, I simply ran the rankings of every single riding in Canada from oldest to youngest. Here are the 905 ridings with their ranking (ie - the 308th riding is the youngest riding in Canada)

I'm no statistician but I notice a tiny trend: The 905 is probably the youngest cluster of ridings in the country. Certainly in Ontario. Seventeen of 20 ridings are in the youngest half of ridings in the country. The Brampton seats - which are presumably key targets for the Conservatives - are the two youngest seats in Ontario. That of course doesn't mean that there aren't seniors in each and every riding but the notion that having a "seniors minister" helps swing the 905? The demographics don't work. If anything, it may make the Conservatives seem out of touch with the actual constituents of the 905 - young families. These people may take the kids to visit grandpa on weekends but in terms of who actually lives in the ridings, they're disproportionately young.

But let's put the "facts" of the 905 aside - facts do nothing but get in the way of a good narrative. Fantino could not be in a more different position from the average senior in Canada. Fantino's pension, based on back of the envelope math, is worth almost $120,000 per year. Consider:

After five years as OPP commissioner, Fantino would be entitled to collect at least $20,000 annually under the Ontario Public Service Pension plan.

For his thirty-six years of service in his various roles that use the OMERS pension plan (London police, York Region police, Toronto police), Fantino would collect at least $87,000 per year.

Additionally, he would receive CPP pension benefits. Given his high salary he would qualify for the annual maximum: $11,210

But the figure could be higher:

Fantino may be benefitting from what is known as an OMERS "Retirement Compensation Arrangement." OMERS retirement compensation arrangement (RCA) is a separate trust fund that provides benefits to members whose pension benefit exceeds the pension benefit limit in the Income Tax Act and Regulation (ITA). See here for more info on RCA's here.

Now when you consider that as an MP, he could potentially have a fourth pension, he really does have the golden pension scenario among seniors.

Fantino is of course entitled to his pensions - he earned them - but in terms of Fantino becoming the bridge to struggling seniors, I just don't see it. If pensions remain a major policy issue heading into the winter session, Fantino is an absolutely brutal spokesperson on the issue and if anything, may become a major liability to Harper on pensions given how much he is receiving annually.

Last, but certainly not least, is the notion that he's some kind of a political star. As Greg Weston put it: "Conservative strategists say the relatively modest demands of Fantino's new cabinet position are perfectly suited to the far more onerous plans Harper has for his new political superstar. Over the coming months, the former top Ontario cop will be assigned to almost full-time rubber-chicken duty, touring the country as both the minister for seniors and the convincing face of the Conservatives' law-and-order agenda."

A political superstar. Let's consider his political career to date:

1. He said absolutely nothing for the entire by-election campaign. Really, no debates. Nothing.

2. Since the campaign, he has essentially uttered one word: Hitler.

That is all. So if the plan is to put him on the rubber chicken circuit so this star can shine, all I can say is Julian Fantino is more likely to cost Stephen Harper votes in the lead-up to an election than he is to help him win a single additional seat.

Cabinet shuffle designed to appeal to GTA voters
May 1, 2018 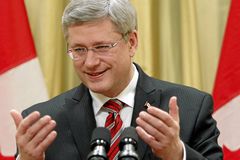 Liberals demand PM slap Julian Fantino’s wrist for Hitler quip
April 28, 2018
'Cluster' strategy puts Tories on track for majority, poll suggests
April 28, 2018
Follow us on Twitter @globeandmail Opens in a new window
Report an error Editorial code of conduct
Due to technical reasons, we have temporarily removed commenting from our articles. We hope to have this fixed soon. Thank you for your patience. If you are looking to give feedback on our new site, please send it along to feedback@globeandmail.com. If you want to write a letter to the editor, please forward to letters@globeandmail.com.
Comments