If Justin Trudeau's launch event was about proving that he could declare his intention to seek the highest elected office in Canada and not stumble out of the gate, a B grade would be fair.

However, if the point was to prove that his popularity is deserved, because he has what it takes to win a general election and go on to be a great Prime Minister, the speech was no better than a D.

This first event of his race did little to improve his chances of winning, but he and his advisers were probably hoping it simply didn't harm those prospects. His team gave him a safe speech, and he delivered it without incident.

But for a party that must find a way to command a place at the centre of the country's political debate, last night offered something between faint hope, and a bit of hope.

Mr. Trudeau's speech proved that he is fluent in four languages: French and English, Politics and Liberal. For a man whose stated mission is to replace worn out, stilted politics with something new and dynamic, the speech contained more than a few off-the-shelf bromides. That doesn't make it a bad speech, only one with a rather glaring internal inconsistency. Apart from an awkward reference to the BlackBerry, it was the kind of big P political speech that could have been heard at any time in the last several decades.

Mr. Trudeau also showed his comfort with the dialect that Liberals have used to rally each other for decades. Great effort was paid to remind people of the Goldilocks DNA of the party: not too right, left, blue, green or red, just the right amount of whatever you are looking for.

This positioning of course is the secret sauce of Canadian politics, except that it's not really a secret anymore. In any event, voters have heard it so often they actually need more substance to know what it means and whether they can trust it.

Mr. Trudeau's stated reason for not talking about big ideas or even small solutions is that he's not presenting himself as the person with all the answers. This might turn out to be enough to win the leadership, and if so, that would be unhappy news for those voters looking for a credible option between the Conservatives and the NDP. Not having all the answers is not a great argument for presenting none.

The most interesting part of this speech may have come when Mr. Trudeau asked voters last night to trust him, trust him like they would trust a neighbour with their spare key. I don't know about you, but of my nearest 10 neighbours, there are few I would trust with my spare key, and I trust them because they let me know more about the kind of people they are than Justin Trudeau seemed willing, or perhaps able, to do last night.

Trust is a currency voters seldom tender these days. To do so, they need to be convinced that there is something very real, and unusually important on offer: huge competency, a tested and impressive character, a powerful idea, some very clear goals.

As I watched, hoping to get a better feel for what makes Mr. Trudeau tick, I kept remembering the notion of how great acting is recognized: it doesn't look like acting. I couldn't help but feel that great effort was put into avoiding spontaneity and risk, which in the end revealed that Mr. Trudeau had moves, not so much "like Jagger," but rather like so many politicians who had preceded him.

It's courageous of Mr. Trudeau to declare that trust is what he's seeking, and it's a good thing: Canadian politics would well served if the ballot question in the next election were: which of these leaders do you trust the most, rather than which outcome do you most want to avoid.

Mr. Trudeau's idea is to make politics feel more authentic, more true to its original purpose, less of a caricature of itself. But the staging, substance and style of last night's event seemed not much of a departure from the norm. Which, ironically, is both a measure of its modest success, and its partial failure. 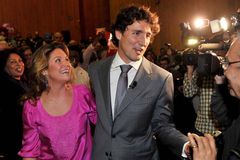 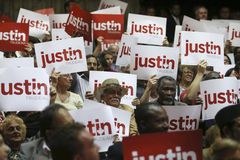 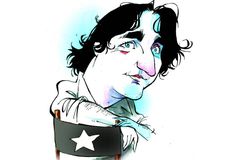 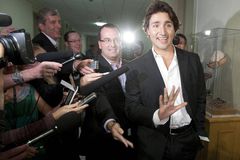