Despite huge public interest, the grounds of Parliament Hill went vastly unfilled during the long-awaited Canada 150 celebrations because of a screening process that failed to cope with demand.

Federal officials cautioned that the events of July 1 show that filling up the Hill for major events is an increasing challenge in the current security environment.

"Inviting half a million people in the downtown core is great from a programming perspective, but the downtown core doesn't afford for that," said a federal official who spoke on condition of anonymity because the weekend's events are still under review. "It's about managing expectations, but having reasonable expectations as well."

Read more: Gord Downie and Justin Trudeau want Canada to focus on the next 150 years

According to the Parliamentary Protective Service (PPS), the maximum capacity on the Hill on July 1 was 70,000 people. For the occasion, the precinct was expanded beyond the grounds of Parliament to include Wellington Street on the other side of the surrounding gates.

However, both the noon-hour show (25,000 people in attendance) and the evening show (41,000 people) fell well short of full capacity.

For the more formal daytime celebrations, attended by the likes of Prince Charles and Bono, about 35 per cent of the available space was occupied by visitors. The musical evening show, hosted by Prime Minister Justin Trudeau and his wife, Sophie Grégoire Trudeau, was held at slightly less than 60 per cent capacity.

Meanwhile, there were huge and chaotic lineups outside the two access control points where more than 70,000 visitors in total were subjected to metal detectors and individual bag searches on July 1.

There were heavy rains Saturday morning, but people from all over the country showed up for the party. Faced with long waits, thousands went back home after seeing that police were not overseeing the flow of people, while others emerged from the screening only to find out that the big events were over.

"People were pushing in and cutting in, coming and going through the lineups. It was mayhem," Greg Udod of Winnipeg said.

There were water stations inside the precinct, but no food venues. As such, visitors who failed to pack enough snacks to last the day had to leave if they wanted to buy food, and go back through security to come back in.

"The sale of food is prohibited on Parliament Hill," Canadian Heritage spokesman Jon Schofield said. "Given the limited amount of space inside the security perimeter, and to reduce any security risks related to public safety and fluid pedestrian circulation … no food vendors were permitted on Wellington Street."

Police authorities have defended the high level of security, stating they are adapting to the modern threat environment that has featured bombings and truck attacks in cities around the world.

Geography poses a major challenge on the Hill. There are cliffs and the Ottawa River to the north of the Parliament buildings, which limits the number of available entry and exit points.

For July 1, there were two big screening tents to the east and the west of the precinct, in order to provide additional ingress and egress routes to the south in the event of an emergency.

"We were tapped out in terms of the number of screening points and screening lanes that we had, based not on resources – we can always find more resources – but based on factors that were outside of our control," said Melissa Rusk, a spokeswoman for the PPS.

A steady rainfall Saturday morning didn't help, as major portions of the lawn on the Hill were flooded. Firefighters were called in to pump out water before the noon show, which halted screening at a crucial moment.

Meanwhile, city buses continued to bring in thousands of party goers downtown, even though there were other venues with lower levels of security and lots of capacity elsewhere in the national capital region.

The Ottawa Police Service said this is a "new era of security" and that the weekend's events will be reviewed to make necessary adjustments in the future. 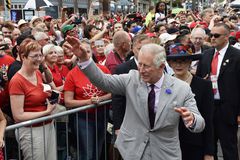 Across Canada, dump trucks and buses protect summer crowds from vehicle attacks
July 4, 2017
Follow Daniel Leblanc on Twitter @danlebla
Report an error Editorial code of conduct
Due to technical reasons, we have temporarily removed commenting from our articles. We hope to have this fixed soon. Thank you for your patience. If you are looking to give feedback on our new site, please send it along to feedback@globeandmail.com. If you want to write a letter to the editor, please forward to letters@globeandmail.com.
Comments