A young Canadian army captain has been acquitted of murdering a wounded Taliban fighter, but found guilty of disgraceful conduct, in a controversial military trial that sparked a debate about mercy killing in wartime.

Captain Robert Semrau was found not guilty of second-degree murder and attempted murder by a jury of fellow officers at the conclusion of a historic military court martial in Gatineau, Que. He showed no emotion as the verdict was read out Monday.

He was, however, found guilty of disgraceful conduct, a lesser charge that carries a penalty of up to five years and could even result in discharge from the Canadian Forces. The 36-year-old father of two has yet to be sentenced.

Capt. Semrau is believed to be the first Canadian soldier to be prosecuted for an alleged battlefield killing - for a shooting that occurred in 2008 in the Afghan province of Helmand. The court martial heard that he fired a double tap of bullets into a critically wounded insurgent whom one witness testified was "98 per cent dead" already.

Lieutenant-Colonel Mario Leveillee, a member of the prosecution team, said he believes the jury's verdict reflects what could be proven in the court martial.

"They've found him guilty of shooting an unarmed, wounded person," he said. "One element that had to be proved to find murder in the second degree was that the individual died as a result. They may have had a reasonable doubt about this."

Prosecutors faced an uphill battle in establishing a murder case, even after some of Capt. Semrau's fellow soldiers testified the officer had privately admitted to shooting the insurgent at close range. There was no body, no autopsy report and witnesses gave conflicting testimony.

Still, Bill Semrau, the captain's brother, said the soldier and his supporters are disappointed that he was convicted of disgraceful conduct.

"We have always believed my brother did nothing wrong and put our faith in the military justice system," he said. He urged people to join a Facebook.com group, Support the Freedom of Captain Robert Semrau, which on Monday counted close to 8,400 members.

The prosecution had alleged the army captain committed a mercy killing because he felt bound by a "soldier's pact" to end the suffering of gravely wounded combatants. There is no defence for mercy killing in the law.

Scott Taylor, publisher of Esprit de Corps, an independent magazine about the military, said he thinks the verdict as it stands is the best possible result.

"I think the message has been sent that they [the Canadian Forces]are going to restrain soldiers from playing God," he said.

Monday's verdict represents the first time a Canadian soldier has been convicted of shooting an unarmed combatant, Lt.-Col. Leveillee said.

Some supporters of Capt. Semrau argue it's unfair that he has been forced to face prosecution for decisions made on the battlefield. "It sickens me to no end that the same government that sent you to a foreign hellhole is prosecuting you for doing your job," one wrote on the Facebook site.

Retired colonel Alain Pellerin with the Conference of Defence Associations said the court martial was necessary for transparency. He said the military is determined to avoid a repeat of the 1990s Somalia affair, where military brass covered up evidence of wrongdoing.

He said the Semrau prosecution, recent charges laid against Brigadier-General Daniel Ménard for an intimate relationship with a subordinate, and the early recall of Colonel Bernard Ouellette from his United Nations post in Haiti are all signs of this.

During the court martial, one of the soldiers under Capt. Semrau's command testified that the officer told his team that he finished off the insurgent and would accept responsibility for any consequences.

"He [Semrau]told us that he shot the Taliban, he put him out of his misery and if anything came of it, he would wear it - those where his exact words," former Corporal Tony Haraszta told the court martial in May. 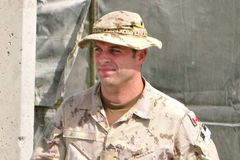 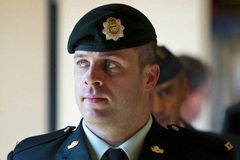