The senator who has been criticized for lauding what she says was the "abundance of good" to come out of Canada's Indian residential schools says her speech was intended to point out that misguided federal spending has failed to improve the social condition of many Indigenous people.

The voice mailbox at Conservative Senator Lynn Beyak's office has been full since last week when she was broadly condemned for an address in the Red Chamber in which she talked about the "kindly and well-intentioned men and women … whose remarkable work, good deeds and historical tales in the residential schools go unnoticed."

The Truth and Reconciliation Commission, which spent six years examining the legacy of the schools, found that physical and sexual abuse was rampant, that as many as 6,000 children died, and the intent of church-run institutions was cultural genocide. Murray Sinclair, who headed that commission and is also a senator, has said he was "shocked" to hear Ms. Beyak's words.

Globe editorial: The harm done by the 'Sixties Scoop'

But Ms. Beyak, who said she will not be resigning despite calls for her to do so, issued a statement Thursday, written in the third person, in which she said the speech in the Senate "was not intended to be about residential schools." Instead, she says, "her focus was on providing clean water, adequate housing and help to the over-representation of indigenous people in our prisons. It is patently unacceptable that indigenous teenagers in Canada have never had a glass of clean water from their own kitchen tap. Instead there are calls for a costly waste of tax dollars by renaming historical buildings across Canada because their names may offend."

Liberal and Conservative governments have spent billions of dollars to help Indigenous people but it's not working and it's time for a change of strategy, wrote the senator, who said she wants to audit "all dollars flowing in and out of reservations."

In fact, while Ms. Beyak's lengthy address mentioned water and housing one time each, there were 17 different references to residential schools. Primarily, she used her time on the Senate floor to mount an objection to the proposal that has been made by some indigenous MPs to rename the Langevin Block, which houses the offices of the Prime Minister, because Hector-Louis Langevin was a supporter of the residential schools.

At the end of her speech, Mr. Sinclair pointed out that Ms. Beyak had not addressed in any substantial way the issue of incarcerated Indigenous women, which was the topic of discussion in the Senate at the time she rose to speak.

On Thursday morning, Senator Lillian Dyck, the chair of the Senate committee on aboriginal peoples, of which Ms. Beyak is a member, issued a statement saying she had received calls and e-mails asking her to remove Ms. Beyak from the committee. Ms. Dyck said she was concerned that Ms. Beyak's comments may have tarnished the committee's reputation and may negatively affect the future of its work.

While committee chairs do not have the authority to remove members, Ms. Dyck wrote, "I would ask Senator Beyak to reflect on whether her continued presence on the committee will do more harm than good as we move forward to study a nation-to-nation relationship between aboriginal peoples and Canada."

But Ms. Beyak made it clear in her own statement several hours later that she had no intention of stepping aside. "Senator Lynn Beyak will not be resigning from the Senate or from any of her Senate committees," she wrote.

Ms. Beyak said in her statement that she has been "involved personally and politically with indigenous people since 1964 and those who heard or read the speech will recognize her knowledge, compassion and expertise." She also said she has stated many times that the suffering of residential school victims cannot be minimized.

Mr. Sinclair will provide a first progress report on the Calls to Action that stemmed from the Truth and Reconciliation Commission at a public forum in Toronto on Monday night. He said in an interview with The Globe and Mail earlier this week that he planned to address Ms. Beyak's speech "and the kind of attention deficit that I think it reflects and where I think the pressure points are for us to change that." 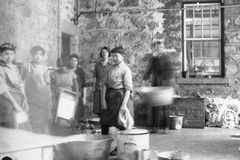 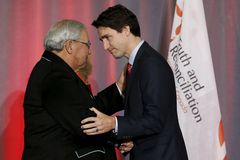