This article is from our archives and was originally published in 2013.

If there is a handbook for being a political wife, Sophie Grégoire has just torn it up.

Maybe it helps to be married to Justin Trudeau, for whom the old rules don't apply, or to be on the receiving end of good advice from his non-conformist mother, Margaret.

But in the midst of the Liberal leadership campaign, the 38-year-old mother of two is talking to a crowd of female schoolteachers in Ontario more like a New Age healer than a risk-averse political partner.

"Focus on your breath, the breath is the divine pulsation within," she says in the ballroom of a Toronto hotel. And then she begins chanting a precisely articulated Sanskrit invocation designed to help her audience feel more blissful and aware about their often under-appreciated profession.

Ms. Grégoire is a recently qualified yoga teacher, energetic supporter of women's issues and public speaker who believes in sharing her knowledge "with as much truth and authenticity as I can."

In the murkier world of party politics, especially at the higher levels to which her husband now aspires, these are not necessarily qualities to be honoured. And that is what makes Sophie Grégoire deeply interesting.

To the mostly young female teachers, who can't get enough of her free-floating candour, she offers up yoga-class insights ("The sacred feminine is on the rise"), tips from the dance teacher at her children's daycare, life lessons from a hiking trip in Morocco and reassuring quotes from the collection of fridge magnets she picks up on anonymity-seeking family trips to Vermont – "I'm at that awkward stage between jail bait and cougar" gets a good laugh. So does "Tequila, because beer isn't fast enough."

Political advisers to leadership candidates are a nervous race, eager to stave off outbreaks of spousal personality before they become hazardous. Ms. Grégoire seems bound to ruffle the all-knowing backroom boys, if not the girls. But when she's asked in a post-speech interview if the more sober members of Team Trudeau have started leaning on her, she laughs an uproariously independent laugh.

"They haven't tried that out on me," she says finally. "I think I have good common sense. I'm realistic enough to realize that sometimes, yes, I'm going to have to be careful. But to the extent of censoring who I am? No, I'm not sure that's going to be necessary."

In her political world view, truth and authenticity are paramount. When she introduced her husband at the launch of his leadership campaign, she says, "the one thing I wanted to share with people was the purity of his intention. He's got brains, he's got a great team, but beyond all that is the purity – it flows through his blood."

They have that much in common, she allows. "What really drew me into his being was the child within. He is very present in his life in the best of ways, because he's in tune with who he is. He's done a lot of work to get to know himself, and I think we connect on that level: When we engage with people, it comes from a real place."

That quality was very much in evidence at the teachers' gathering, where one questioner broke into tears as she shared her experience of job stress, and many participants got personal hugs from the charismatic guest speaker.

But in other ways, Ms. Grégoire noted, she and her husband are quite different professionally and personally. "He tends to be more reclusive when faced with stress, while I tend to expand and talk it out. We've been very aware of our dynamics as a couple and we've worked that out – nothing comes easy."

With political enemies looking for evidence to cast Mr. Trudeau as soft and naive, isn't that a dangerous remark? "I don't accept that," she says. "What we need is more goodness in society, and people are ready to elevate not only their thinking but their awareness of human consciousness to a more refined place."

Ms. Grégoire knows politics can be a dirty business, but she came round to the decision that it was time to share her husband with Canadians. She believes, after some consideration, that it's possible for him to be both a good father and "complete his responsibility as a human being" – i.e. become a successful Liberal leader.

Although her daughter, Ella-Grace, and son, Xavier, are just 4 and 5, she thinks they have the inner peace to handle their father's political accession. "I realize now, they were born to this. It's normal for them when they see a huge group of people and everyone's rushing up – they're not stressed."

As for how she deals with her husband's absence, she answers, "I'm an only child and I'm very independent. I never feel lonely when I'm alone. I miss my husband, but our time together is so precious and so full that there are ways to make this happen."

The twinned world of family and politics she inhabits is much different from that of her mother-in-law, but she couldn't help but take in Margaret Trudeau's words of wisdom. "She looked me in the eyes and said in one true moment: 'Be wise, be grounded, protect the people you love. It's not always going to be easy.'" 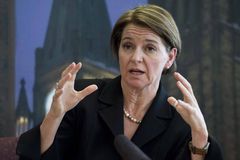 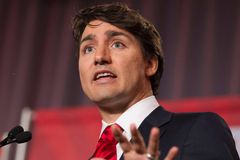 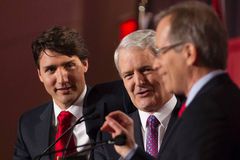