Jonathan Scott is a PR consultant at Key Gordon Communications and a Liberal political activist.

Sometime after Thursday afternoon, Andrea Horwath and her Ontario NDP will face a choice. Either they vote for the Liberal budget or they bring down a government they feel remains mired in the scandals of its former self.

We have seen this movie before. In 2005, the late Jack Layton sat across from a minority Liberal government. Earlier that year, he exerted his clout to secure new spending for a wide range of his preferred projects – everything from pension funding to public transit, funded by delaying corporate tax reductions. He did this despite a lingering scandal the governing party inherited from the new first minister's predecessor.

But at the end of the year, the NDP leader decided to vote down the minority Liberals and an election ensued. Conservative leader Stephen Harper won, and the rest, as they say, is history: eight years of Conservative rule, and the cancellation of a long-sought national childcare program and the historic Kelowna Accord.

When Ontario Finance Minister Charles Sousa stands in the legislature to table his budget – one that pre-announcements suggest will invest in public transit across the GTA and create a new pension plan – it will feel like déjà vu all over again.

For Liberals, the fears and the frustrations are clear. (This is probably acutely true for David Herle, the Liberals' managing campaign co-chair, who worked for then-prime minister Paul Martin.)

Under Premier Kathleen Wynne, the Ontario Liberal Party has reverted to its progressive instincts, abandoning a divisive austerity agenda. As Adam Radwanski wrote when she won the leadership over a year go, Kathleen Wynne's convention supporters, myself included, "seemed to be fuelled by the prospect of making history, and returning [the] party to the values that had drawn them to it."

That has largely happened. The Ontario government saved the Experimental Lakes Area from the cuts of the Harper government. The Premier put transit funding at the forefront of her agenda and boasted of national leadership on a looming pension crisis. She mended fences with teachers and sought a more consultative, open government. She raised the minimum wage and the budget contains new money for developmental services.

All of these priorities are things the NDP should support.

But, just like in 2005, the tension is palpable. On the one hand, a progressive premier is doing much of what the NDP has long desired. And yet, on the other hand, the gas plants persist as the perennial stench.

There is real anger out there about the gas plants. The Premier recognizes this; she apologized, implemented a new, better process, and, in the face of police allegations, she has distanced herself from the presumed players in the saga, reminding the public that "They never worked for me."

For the NDP, the gas-plant scandal, like the sponsorship scandal a decade ago federally, is a stench they do not want to share (even though they too promised to cancel the gas plants). The tension between voting for a budget that invests in your values and giving a governing party you believe to be corrupt another year in power must be excruciating.

I do not pretend to know what Andrea Horwath will decide to do. But for progressives across the country, Jack Layton's gamble is a fearful lesson: vote down a Liberal minority government and risk losing the government to an all-too-real Conservative bogeyman. The risks are real – Tim Hudak offers an aggressive right-wing agenda of slashing and cutting social programs.

If that's the risk in voting down the government, what's the reward?

There is no clear path now for the NDP to win government. Polls show a mixed bag, but consensus seems to be that Ms. Horwath's party could lose five seats or win as many as 10. More than half of the ridings haven't nominated candidates, further diminishing her chances.

Yet, polling suggests there is a chance the Conservatives could win a majority government.

Since the 2011 election, Ms. Horwath's NDP has won more seats. So, she now enters a high-risk round of poker. Having built up a nice stack of chips, does she go all in with a pair of sevens and twos?

The best possible reward for the NDP's gamble looks like 10 more seats and an increased caucus in a re-elected Liberal minority government. That's it.

And the risk, just like in 2005, is a Conservative government with an agenda combining the worst of Mike Harris and Rob Ford. 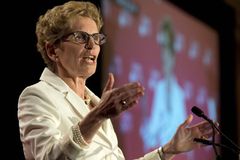 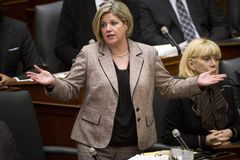 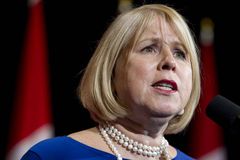 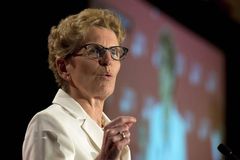 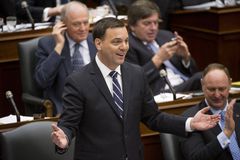 Parties show what they have in common with the pariahs
April 25, 2014 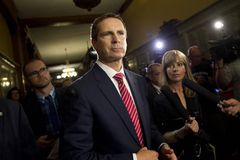