As the four-week provincial election campaign drew to a close, Wildrose candidates Allan Hunsperger and Ron Leech, both pastors, caused a stir with statements that critics called intolerant. Mr. Leech told a radio station he had an advantage in his Calgary riding because he is white. Edmonton's Mr. Hunsperger, in a year-old blog posting, said gays will spend eternity in a "lake of fire, hell."

"We took some hits in the last week of the campaign that caused people to question whether or not we were ready to form government," she said after her concession speech in High River, a city south of Calgary. "They decided we weren't. They decided that we needed a little bit more time."

While only two candidates were involved, the rookie leader said their words hindered the rest of Wildrose's slate.

"There were a couple of comments from candidates that caused people to pause and worry about what our other candidates might be like."

Alison Redford, the Progressive Conservative Leader, ended up with a majority government by employing the same strategy she used during the PC leadership battle, Ms. Smith said.

"Ms. Redford won her [PC]leadership on the basis of getting Liberal and NDP supporters to vote for her at the leadership, and clearly she did the same thing tonight," Ms. Smith said. "You just have to look at the percentage of the vote for the Liberals and the (New Democrats) to see it was a successful strategy."

Wildrose is supported by conservative Albertans who feel the PC Party has moved too far to the centre. Wildrose did well in rural Alberta and Ms. Smith said her first priority as Leader of the Opposition will be rural issues.

"I think with the candidates we've elected, the rural voice is going to be heard loud and clear in the legislature," she said as supporters mingled at Wildrose's election night headquarters.

"Landowners feel like their rights are under threat. They feel like the value of their property is under threat by government regulation. So I look at this as a mandate for us to press forward and try to get the government to address the problems with those bills."

Earlier, she put a brave face on the fact she is headed to the legislature, but not for the job she wanted.

"Today I stand at the helm of the Official Opposition," she told supporters in High River, after her upstart Wildrose Party lost the election.

"Am I surprised? Yeah," she said. "Am I disappointed? Yeah. Am I discouraged? Not a chance."

While Ms. Smith hopes Wildrose will rally in the next round, this election highlights the power of the PCs.

"It says the PC brand is maybe the strongest brand in Canadian political history," said Rod Love, who was chief of staff for former conservative premier Ralph Klein. "It can take a ton of hits and body shots, and after 41 years, Albertans still respond to the brand."

Indeed, 18 prominent Calgarians – ranging from business leaders to arts advocates – threw their support behind Ms. Redford Friday. In an open letter, they cautioned voters against supporting an untested party.

Ms. Smith said she's ready for hew her job, even if it is a consolation prize.

"I certainly look forward to debating with her in the legislature," Ms. Smith said of Ms. Redford. "We will work hard to hold this government to account on behalf of all Albertans."

Pollsters left scratching their heads over Alberta election results
April 24, 2012
Why the Alberta PCs prevailed after all
April 24, 2012 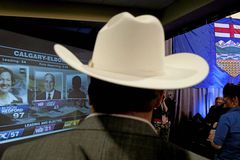 Follow Carrie Tait and Josh Wingrove on Twitter @CarrieTait @josh_wingrove
Report an error Editorial code of conduct
Due to technical reasons, we have temporarily removed commenting from our articles. We hope to have this fixed soon. Thank you for your patience. If you are looking to give feedback on our new site, please send it along to feedback@globeandmail.com. If you want to write a letter to the editor, please forward to letters@globeandmail.com.
Comments