In early 2010, at an exclusive private club in Old Montreal, Lucien Bouchard met with his former prize recruit, François Legault, to talk politics and the need for a new party in Quebec.

The club, named 357c for its 200-year-old address on rue de la Commune, bills itself as a place where creative thinking can be conducted in "the utmost comfort and discretion." This occasion called for privacy.

Mr. Bouchard, a former Parti Québécois premier and an inspirational figure for pro-independence forces in the 1995 referendum, had been out of politics for almost a decade and was determined to stay out of the fray. Mr. Legault, a former minister recruited by Mr. Bouchard in 1998, had resigned from the PQ just a few months earlier.

Experience drove them to the same conclusion: Quebec sovereignty was an impossible dream and the PQ, while leading in the polls at the time, was defending an option that was obsolete.

"I met Mr. Bouchard a few times over the past few years, and we discussed a lot of things," Mr. Legault recalled in an interview. "For a few years now I witnessed a political vacuum in Quebec. It was only by default that the PQ [in 2010]was ahead in the polls. … But I sensed that people had no desire to decide between sovereignty and Canadian federalism."

Nearly two years later, Mr. Legault leads an upstart party called the Coalition Avenir Québec that swallowed up its right-of-centre rival this week. The new party was far in the lead in recent polls – thanks, in part, to a promise to put sovereignty on the shelf. The PQ is coming apart at the seams with constant leadership crises, while the Bloc Québécois is a rump. Support for Quebec independence has slipped as low as 33 per cent, below the 40 per cent long held as a floor.

At the moment, Quebeckers are less likely to debate the merits of independence than to argue over what went wrong. Was sovereignty just another trip of the Woodstock generation? Did federalists stumble into a winning strategy with constitutional dormancy and occasional concessions? Or is it just that 17 years of mediocre PQ leadership has failed to stir Quebec nationalists?

Ever since Pierre Trudeau declared "separatism is dead" just before the PQ took power in 1976, few dare make such predictions. But the sovereignty movement is gravely ill, and in the most unexpected places.

The Université de Montreal is traditionally one place to find the young francophones who fuelled the dream with numbers and zeal. In 1970, the RCMP singled out the school as "a hotbed of separatists," according to documents unearthed by author Steve Hewitt.

For many of today's students, the sovereignty-federalism debate feels passé, a battle fought by their parents' generation.

This fall, a political-science professor at the university conducted an online poll of his first-year undergraduate students. How many supported Quebec sovereignty? Of the 160 students in the class, only 31 per cent answered positively, 49 per cent were against and the rest undecided.

The professor, a man in his 40s, was taken aback. When he was a young student, he told the class, everyone would have said yes to sovereignty.

To 24-year-old Jean-Philippe Gauvin, a PhD student and teaching assistant in the class, it was a barometer of changing times. "Before, there was the Yes clan and the No clan," he said. "We're in the we-don't-care clan."

The evidence extends well beyond one classroom experiment. Léger Marketing recently conducted a poll and compiled other research that shows independence has become an older person's game. Support among 18- to 24-year-olds has slipped steadily to 32 per cent in a poll conducted this fall, about half of the support around the time of the referendums in 1995 and 1980. Today, the 45-to-54 crowd is most likely to support independence.

"Historically, it was seen as a change movement, and usually when young people are drawn to politics, it's because they're looking to shake things up. The sovereignty movement no longer manages to reach that sentiment," said pollster Sébastien Dallaire of Léger Marketing. "When you look at the situation for all ages, you have to go back to the start of the PQ in the 1970s to find numbers that low."

It's not yet an autopsy, but a dissection is taking place to determine which came first: Did indifference toward independence cause the trouble in the movement's political arm, or did bad political leadership set nationalists adrift?

Jacques Parizeau, the Quebec premier during the 1995 vote, says a series of PQ leaders, starting with Mr. Bouchard in 1996, have diluted the independence objective in the quest for power. If the party was vague about achieving sovereignty, Mr. Parizeau argues, how could it hope to convince voters?

Current PQ Leader Pauline Marois has proposed a gradual approach using a series of referendums to wrestle power away from Ottawa while waiting for the "opportune time" to seek sovereignty.

Mr. Parizeau says this strategy is a distraction. Stéphane Dion, the federalist constitutional expert and arch-foe of sovereigntists, says it's a dead end.

"A referendum is not a tool adapted to complex questions," Mr. Dion said. "There isn't a federation in the world that would allow itself to be governed by provincial referendums on matters of federal jurisdiction."

Jurisdictional arguments like this do seem unlikely to inspire a wholesale revival. Sophie Morin, a 29-year-old sex therapist who believes the sovereignty debate is still relevant, said many causes that matured with the baby boomers have trouble sparking youth interest. The women's movement is one example, she said.

But as the sponsorship scandal showed five short years ago, when support for sovereignty jumped into the 50s, Quebeckers can still reactivate "the option" if pushed.

"People might seem fine with the status quo, but if they start to feel strongly enough that the status quo is threatened, watch," Ms. Morin said.

And even if Mr. Legault's new party eventually helps kill off the PQ, it would not be the end of the independence movement, she said. "Sovereignty," she said, "is not the property of the Parti Québécois." 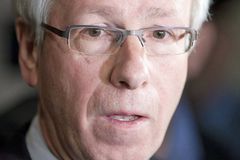 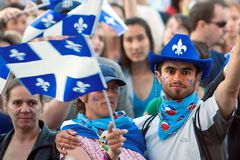 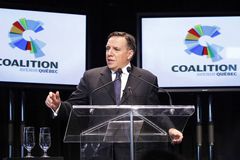 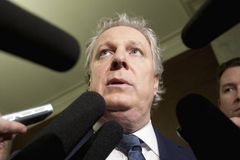 Opinion
With separatism on hold, what next for Quebec?
December 23, 2011