Foreign Affairs Minister Stephane Dion says he considers Aung San Suu Kyi to be Myanmar's de facto leader, noting she is bound by a "strange rule" in her country's constitution.

Dion was in the formerly military-controlled pariah state Thursday for a first-hand look as it takes its most formative steps towards democracy, the newly elected government having taken office last week.

Dion, the latest in a handful of foreign ministers to visit the new Myanmar government, said the arrangement is legitimate and part of what will be a long journey for the country towards democracy.

Dion called Suu Kyi, now Myanmar's foreign minister, "the de facto national leader" of her country "because they have a strange rule that if you have married somebody who's not of the country, you cannot be the leader of the government and of the state."

Suu Kyi, the internationally recognized democracy advocate, is barred from becoming president because her late husband was British, as are her two sons. The rule was crafted during Myanmar's decades of military rule, which Suu Kyi fought against during years of house arrest before finally prevailing last fall.

Suu Kyi led her once-banned party, the National League for Democracy, to a landslide victory in November.

She selected an ally, Htin Kyaw, to occupy the president's position, while parliament created a new position of "state counsellor" for Suu Kyi that gives her powers similar to a prime minister.

"I think it's a very, very odd situation but it's not the only odd situation in which they are (in)," Dion said during a teleconference after meetings in the Myanmar capital of Naypyitaw.

"They will have to invent very original solutions to go ahead with their project to make this country a democracy."

Suu Kyi, one of a handful of honorary Canadian citizens, won the Nobel Peace Prize for her pro-democracy efforts.

Dion announced $44 million in assistance for Myanmar to help it build democratic institutions, including projects to help women start small businesses and have access to credit.

"I think, particularly, Canada is anxious to help us in the peace process. And this is the kind of assistance that we very much welcome," she said.

"And we would appreciate everything that our friends can do to assist us in our efforts to make this country, one that has built unity out of diversity."

Dion said afterwards that during his meetings he stressed the message the Prime Minister Justin Trudeau has delivered numerous times in Canada, and outside: that Canada is strong because of its diversity, not in spite of it.

The sentiment was well received, the minister said.

"They are expressing the will to have national reconciliation," Dion said. "In order to succeed, Myanmar will have to find solutions to the ethnic difficulties, accommodations between different religions."

Dion defended the government's decision to close Canada's Office of Religious Freedom, which was established by his Conservative predecessors.

He said Canada's promotion of freedom of religion "would be more effective than was the case with an office that was doing a good job" because it would be part of a broader fight to protect all rights.

Myanmar, formerly Burma, gained its independence from Britain in 1948. Suu Kyi's father, Gen. Aung San, was the hero of the country's independence but he was assassinated by rivals, plunging Burma into a half-century of military rule. Suu Kyi was just two years old.

Suu Kyi, who was living in Britain, returned to her homeland to visit her dying mother in 1988 and took up her father's mantle after a popular uprising broke out.

Her party won landslide election in 1990, but the military junta denied the victory. Suu Kyi spent much of the next two decades under house arrest, after becoming a Nobel Laureate in 1991.

Myanmar took its initial steps towards democratic reform in 2010. Canada eventually lifted its sanctions and opened an embassy in 2013. 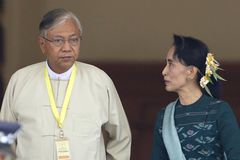 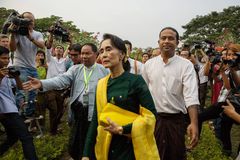