In light of new evidence that several staff in the Prime Minister's Office knew about a $90,000 gift to Senator Mike Duffy earlier this year, Stephen Harper maintained Saturday he had been unaware of the deal until months afterwards. He also told reporters he has answered questions on the matter to the best of his knowledge – even if what has now been laid out in a sworn RCMP affidavit contradicts his past remarks in the House of Commons.

The Prime Minister, who has long said it was his former chief of staff Nigel Wright's sole decision to use his personal funds to cut Mr. Duffy a $90,000 cheque, said Saturday that Mr. Wright will be held "accountable" for the arrangement.

"This was not a decision of the office, it was a decision of Mr. Wright. And he will be held accountable for that," Mr. Harper said at Calgary's federal office building Saturday.

A sworn RCMP affidavit made public this week alleges three other PMO staffers besides Mr. Wright knew about the an arrangement that saw Mr. Wright give Mr. Duffy a $90,000 cheque earlier this year. The money allowed the senator to repay his improperly claimed expenses, thereby cutting short some of the scrutiny he faced over his taxpayer-funded bills.

The affidavit also said the Conservative Party had considered paying the money to Mr. Duffy until the party officials realized how much it would cost.

In June, Mr. Harper told the House of Commons that Mr. Wright was the only person who knew about the $90,000 payment.

He then made a reference to the the recent RCMP documents, saying "what's in the affidavit is the extent of what we know."

Mr. Harper made the brief comments on the new developments in the Duffy affair hours before a major fundraiser for his Calgary Southwest constituency association, a wealthy pillar of support for his party.

"Obviously, had I known about this earlier, I would never have allowed this to take place," he told reporters. He maintained he didn't know about the transaction until May 15, after media reports made the payment public. He said the RCMP affidavit released this week affirms that Mr. Wright made the sole decision to pay tens of thousands of his personal funds to Mr. Duffy.

The RCMP filed the documents on June 24 as part of its investigation into whether the Prince Edward Island senator committed fraud and breach of trust.

Political partisanship taking a back seat to flooding at Calgary Stampede
July 6, 2013 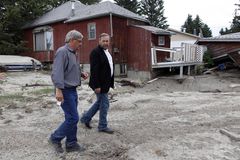