Is Stephen Harper kaput? Is his goose finally cooked? It sure looks that way.

According to the latest polls, only 27 per cent to 31 per cent of Canadian voters intend to vote for his party. This is after the Maclean's-hosted leaders' debate, the tax rebate cheques to parents of young kids, and a zillion Conservative bucks spent attacking their rivals.

What this really means is that the Harper government is light years away from another majority and can win a plurality only if they're very lucky in the vote split. The Conservatives haven't been able to rise much above the low 30s for years now and have mostly hovered around 30 per cent or even lower. For perspective, they won their majority in 2011 with 39.6 per cent of the vote. So about a quarter of their voters have now deserted them. At 30 per cent Mr. Harper can't even win a minority. He's a dead parrot.

So the Prime Minister needs to win back a huge chunk of Canadians, fast, or he's chopped liver. But how? He's already tried just about every trick in his big bag of black magic, and it appears that nothing has worked. What rabbits can he pull out of his hat in these last two months that will appeal to those who've resisted his seductive lure so far?

Think of all the feats Mr. Harper has already attempted that have completely failed. Canada was going to be an energy superpower; remember that one? And it was going to achieve this unwelcome destiny while millions of Canadians were increasingly seeing greenhouse gases as an existential threat.

There was going to be an oil pipeline running under every bed in the nation, possibly lying cheek by jowl with a terrorist. Never mind the implacable opposition of environmentalists (not intimidated even when they were suddenly audited) or the determination of First Nations to exercise their sovereign rights. And who can forget the latest pipeline leak? They seem to be a daily occurrence.

Canada was going to celebrate new trade treaties that would supposedly make us prosperous and dynamic, especially huge agreements with Europe and Pacific nations. Neither is yet a done deal.

So, the record: No energy superpower, no new pipelines, no big trade treaties. Nothing worked.

Still, the country kept being assured that exciting news was on its way from Ottawa. Major cabinet shuffles were supposed to excite the citizenry. The country yawned. A series of politically minded budgets would bring Canadians to their feet. The country sat. If you judge by the polls, years of lavish government advertising of its so-called Economic Action Plan has impressed only the party base. Meanwhile, the Conservative front bench evaporates before our eyes, all replaced by the enchanting Pierre Poilievre.

The government worked hard to woo Canadians using our own money. Taxes like the GST were cut, at a cost of billions that were needed for universal public programs and new infrastructure. Targeted tax credits were meticulously aimed at bribing politically ripe demographics. Are the latter grateful? Did the billion-dollar blitz of tax bribes, which happened to materialize just as the campaign was called, do the job? So far, the polls suggest a serious lack of appreciation for the government.

Of course there's always terrorism. Some pundits believe that another terrorist attack here at home would give the election to Mr. Harper. He'd insist that only he can protect us from such attacks. But surely some would wonder how, after all his fearmongering and repressive new security legislation, he couldn't save us from another assault.

If none of these ploys has helped increase Mr. Harper's popularity over the past four years, what rabbits can he pull out of his scruffy hat with only nine weeks to go? Will trillions of dollars in fiendish new Conservative advertising pay off? More targeted tax bribes to buy the votes of those much-cherished but elusive hard-working, middle-class families? Billions more in handouts to designated ridings across the country? Apologizing for everything? Denouncing that infamous axis of evil – Vladimir Putin, Rachel Notley and Kathleen Wynne – again and again?

Are there any dirty tricks they haven't yet tried? I'd say the answer must be yes. These guys are ruthless and they hate losing. They've got nine weeks to go and they'll go down dirty. Undoubtedly there's an October surprise coming. But it's hard to imagine what miracle will finally resurrect their support at this late stage.

At the same time, Stephen Harper's many detractors are not sleeping. The Mike Duffy trial drips, drips, drips on Conservative fortunes. The New York Times has just run an unusually bitter opinion column headlined "The Closing Of The Canadian Mind." And the blogosphere is aflame with awful tales of Stephen Harper's transgressions, not least his undermining of democracy. Last week the Tyee online newspaper powerfully documented "70 Harper government assaults on democracy and the law." That's right – 70 different cases. Opposition leaders mysteriously chose not to utter a peep about this crucial matter during that first leaders' Debate. But civil society is on fire about it.

Surely we can now just about assert that Stephen Harper is certifiably chopped liver. Pass the rye bread and sour dills, and enjoy. 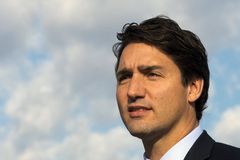 This election, the question is: Does Harper deserve another term?
July 27, 2015