The message to Ukrainian President Viktor Yanukovych was unmistakable: Canada wants closer ties with Ukraine, but only if Ukraine is free.

Prime Minister Stephen Harper's trip to Kiev Monday contained some substance, but much more symbol, tying the pain Ukraine has endured to the new trials the young democracy faces at the hands of its current President.

The most poignant moment came as Mr. Harper honoured the dead of the Holodomor at a memorial built to commemorate the millions of Ukrainians killed through starvation by Joseph Stalin in 1932-33. A sombre-looking Mr. Harper laid a pot of grain at the Sad Memory of Childhood, a statue of a wraith-thin young girl.

He was Prime Minister when Canada became one of the earliest countries to proclaim the famine an act of genocide.

"One of the great crimes of history," Mr. Harper said later. "I hope always that it will remind the Ukrainian people of the importance of their freedom, their democracy and their independence, and of the necessity of always defending those things."

Sitting beside the Prime Minister was Mr. Yanukovych. The stolid President's election in February brought an end to the Orange Revolution, done in by corruption, incompetence and infighting.

The economy is doing better under his leadership, but press freedom is under attack and opposition parties accuse the government of rigging the coming municipal elections. The President, who is ethnically Russian, denies the famine was an act of genocide, arguing that other parts of the former Soviet Union also suffered. "It was a crime aimed against our own people," he said at the press conference.

The two leaders agreed to boost free-trade negotiations that got underway in May, and that are scheduled to resume in December. And they signed a youth mobility agreement that will make it easier for young Canadians and Ukrainians to travel and work in each other's country.

But Mr. Harper kept circling back to the question of human rights - and, by implication, the threat of their loss - in Ukraine.

"Canada will continue to support Ukraine whenever it moves forward for freedom, democracy and justice," he declared.

The most pointed reminder of Canada's displeasure with Ukraine's endangered freedoms under Mr. Yanukovych comes Tuesday in Lviv, when the Prime Minister will meet with Ruslan Zabilyi, director of the new Prison at Lonsky, a museum, research centre and memorial commemorating political prisoners who suffered at an infamous prison.

Although he has been released, the museum director has been told a criminal case is being prepared against him. Mr. Harper's decision to meet with Mr. Zabilyi on an official visit is a clear warning to Mr. Yanukovych that Canada has noticed what he's doing, and doesn't like it.

Leaders of Canada's Ukrainian community were pleased with the messages Mr. Harper is sending.

"The itinerary was extremely well thought out," said Lisa Shymko, director of the Canada-Ukraine Parliamentary Centre. "It sends a message that the Prime Minister is not doing a business-as-usual trip to Ukraine."

Earlier in the day, Mr. Harper laid a wreath at the war memorial. He also visited the memorial at Babi Yar, the ravine where Nazi troops massacred more than 33,000 Jews over two days in September of 1941.

Whether Mr. Yanukovych cares about any messages Mr. Harper might send is problematic. But Ukrainian Canadians will care, and they represent an important voting bloc in the Prairies. 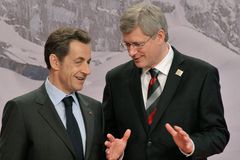 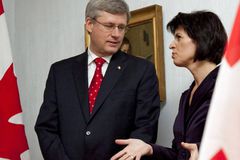