The photo-op of Stephen Harper helping to haul an oil boom to contain an imaginary spill was over, and the Prime Minister's handlers started herding everyone back to the cars and buses. But Mr. Harper had other ideas.

There were moments like this one scattered throughout this week's trip across Canada's North: the Prime Minister stomping his feet and waving his arms among Inuvialuit dancers in Inuvik; jumping onto an ATV and leading his astonished security detail on a wild chase down an airport runway Thursday in Tuktoyaktuk.

And it's a Boy's Own-stories love of an Arctic taught to generations of schoolchildren: Inuit struggling against a harsh and barren land; remote outposts flying the Canadian flag; the night sky bedazzling with Northern Lights.

"This annual visit has become a tradition," he said in Inuvik. "It is something I look forward to all winter long, and is the highlight of my summer." This rings true.

But whatever the well from which that love springs, it is helping refashion the Canadian North. The billions of new investments are real, however slow the money flows. The blunt assertions of Canadian sovereignty are as real as the now-regular troop exercises.

The marine refuge for beluga whales that Mr. Harper announced in Tuktoyaktuk Thursday was real, part of an expanding net of protected areas aimed at preserving the Arctic environment while still promoting economic growth.

And the politics, of course, is real, as the Conservatives seek to exploit Canadians' own romantic attachment to a place that virtually none of them will ever set foot in, and to exploit as well their increasingly bullish insistence that the North is Canadian territory, that its waters are our waters, and that Canada is willing to spend what it takes to back up those claims.

If there is a new nationalism emerging in this country, if the rising generation of Canadians are casting off, or simply ignoring, the ancient animosities and insecurities that have bedevilled the Canadian psyche for so long, and are singing instead the unparallel possibilities of the future, then, a Northern renaissance may be part of this new myth.

In which case, there are votes in it, votes to be found down south.

Ironically, Mr. Harper's attachment to the North is also anachronistic, as he implicitly acknowledges by repeatedly recalling John Diefenbaker's vision of "a new Canada - a Canada of the North."

It must also be seen as an anachronism to those relatively recent immigrants from Asia who live almost exclusively in Canada's largest cities.

But the North reflects the growing geopolitical reality that ice is melting; the region is becoming more navigable; the Russians - who, as someone once said, are never as strong as they look nor as weak as they look - are once again trying to expand their borders, and China has a polar icebreaker in the Arctic right now and thinks other nations deserve a say in what goes on up there.

If nothing else, Mr. Harper's five annual northern excursions have focused our collective attention on the North, traditionally the most neglected part of Canada. The region is not only growing geo-strategically in importance; increasingly it gives more to the Canadian economy than it takes. Diamonds have made the Northwest Territories so wealthy - though the wealth is not evenly spread - that if the territory were made a province it would be "have" rather than "have not" on the equalization scale. Yukon led the country in growth last year and Nunavut will this year.

Speaking with the people of the region, you sense their frustration at how the potential of oil and gas exploration to unlock the economy is being hindered by southern environmental concerns. They badly want and need a year-round road between Inuvik and Tuk. The government is studying a report on how much it would cost.

These commitments cost tens of billions of dollars and previous governments have been loath to commit the funds. The Conservatives, though they are staggering the investments over a decade and more, are not.

It will be fascinating to watch whether and how the Conservatives are able to parlay these commitments into increased political support. Will Canadians celebrate and support a more robust presence along Arctic shores and on Arctic islands? Or will they insist that the money be spent on streetcars and hospitals and schools down south? Is the New Canada entirely multicultural and urban, or does it still have frontiers?

If nothing else, the Arctic gives the federal government something to do. So much control over social policy now lies with the provinces that it is fair to ask what it is Canadians get for all of the money they send to Ottawa. In that sense, asserting Arctic sovereignty is like proposing a national securities regulator. It affirms the continuing relevance of the federal government within the federation.

Stephen Harper no doubt balances all of these calculations as he promotes his northern strategy. But there is something else there, something positively bordering of friskiness when he is up here.

This is simply another of his many contradictions. 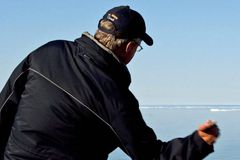 Harper cuts loose on air-strip ATV joyride
August 26, 2010
Beluga whales to gain new protection zone
August 26, 2010
Follow John Ibbitson on Twitter @JohnIbbitson
Report an error Editorial code of conduct
Due to technical reasons, we have temporarily removed commenting from our articles. We hope to have this fixed soon. Thank you for your patience. If you are looking to give feedback on our new site, please send it along to feedback@globeandmail.com. If you want to write a letter to the editor, please forward to letters@globeandmail.com.
Comments