The United States, among other nations, has long maintained that the Arctic Council is the only place where Arctic issues should be discussed. When Canada went ahead and held its own meeting of ministers, Washington made its displeasure known.

It was all part of what turned out, for the Conservative government, to be a G8 foreign ministers meeting from hell.

But contrary to many wagging heads, there does not appear to be any linkage among the three snubs that Secretary of State Hillary Clinton visited on the Conservative government this week.

On the Arctic, on maternal health, on Afghanistan, a strong Secretary of State spoke her mind, leaving Prime Minister Stephen Harper reeling.

"Whether it comes to our role in Afghanistan, our sovereignty over our Arctic or ultimately our foreign-aid priorities, it is Canada and Canadians who will make Canadian decisions," he told the House of Commons on Wednesday.

The kerfuffle reveals that, on a number of key bilateral issues, the Harper government and the Obama administration just don't see eye to eye. It makes clear as well that Barack Obama's administration has little concern for Canadian sensibilities.

The Secretary of State says what she thinks, even if her remarks cause the Canadian government grief.

All Arctic nations are struggling to manage territorial claims, navigation rights, seabed resources, environmental and defence issues and a plethora of other concerns surrounding the Far North.

The U.S. government believes that the Arctic Council - an association of eight nations and various aboriginal groups - is where talks about the Arctic's future should take place.

But Foreign Minister Lawrence Cannon nonetheless chose to hold a smaller meeting, one of foreign ministers of nations that actually border the Arctic, in conjunction with a meeting of G8 foreign ministers earlier this week.

To mark her displeasure, Ms. Clinton read from a statement: "I hope the Arctic will always showcase our ability to work together, not create new divisions."

She then went on in an interview to say she hoped Canadian troops would stay in Afghanistan after 2011, even though the government is committed to a full troop withdrawal in 2011.

And Ms. Clinton topped it off by insisting abortion had to be an option in programs protecting the maternal health of women in developing countries, even though the Conservative government is determined not to fund abortions.

It left many wondering what Canada has done to offend the Obama administration.

The answer is nothing in particular. Canada and the United States differ on managing Arctic issues, on whether Canada should quit Afghanistan, on whether maternal health programs should include access to abortion. When directly asked questions on these issues, Ms. Clinton directly answered.

"It's a tempest in a teapot," maintained Derek Burney, who was Canada's ambassador to the U.S. for former prime minister Brian Mulroney.

Everyone knows the Americans appreciate Canada's contribution to Afghanistan, "and clearly they would like us to stay. But it wasn't a formal request. It was her position and the position of her government" he said. The same applies on Arctic sovereignty.

As for maternal health, the Obama administration made a point of reversing George W. Bush's ban on foreign aid for family planning. There is no way Hillary Clinton, a passionate advocate for women's rights, would disguise her disagreement with the Harper government's stand.

"When will this soap opera end?" asked Gordon Giffin, the former American ambassador to Canada during the Clinton administration.

Ms. Clinton is wont to speak her mind and speak it forcefully, he said. "When you ask her a question, you get an answer."

Even if that answer embarrasses the Prime Minister of Canada.

Opinion
Why was Hillary Clinton so hot under the collar?
March 31, 2010
Clinton rebukes Canada on Arctic meeting
March 29, 2010 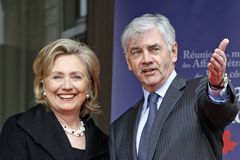