Canada's first boat people were the Norse who came ashore a thousand years ago in Newfoundland. They fit the refugee pattern: farmers and simple artisans, maybe a few fierce Vikings among them known for terrorizing Europe, people driven out of their homeland by population pressures and political unrest.

No one knows how they were received by the local inhabitants, the Beothuks. Probably not well. The Beothuks' response to later European arrivals, before they became extinct, was to hide from them by moving inland.

But historians know the next boat people, Jacques Cartier and his Breton mariners, who sailed into Gaspé harbour in 1534, and quickly developed a sour relationship with Iroquois chief Donnacona, ticking him off by their pushy behaviour in claiming the land for the French king and kidnapping his sons.

The primal fear of the stranger, the Other, seems edgiest when they arrive by sea.

They can be watched, coming across the blank, huge canvas of the ocean, moment by moment growing larger and more ominous on the horizon, carrying alien stuff. Hence the noisy narrative of the MV Sun Sea's progress over the Pacific into Canadian territory with its Tamil cargo.

That archetypal fear of the stranger-by-sea was inherent in the two most shameful moments of Canadian boat-people history, the stories of the Komagata Maru and the MS St. Louis.

Across the Pacific from British Columbia at the turn of the century was the Other of the Empire's colonial world - the "lesser breeds without the law," Rudyard Kipling called them in his poem Recessional, composed for Queen Victoria's diamond jubilee in 1897. They were the yellow peril, the dark-skinned wogs (derived from the Golliwogg, a minstrel doll character from a children's book published in 1895), the threats from a different human order.

In May, 1914, the Japanese-owned steamship Komagata Maru, chartered out of Hong Kong, arrived at Vancouver with 376 passengers from India intent on emigrating to Canada.

"Hindu invaders now in Vancouver harbor," read a welcoming newspaper headline, incorrectly. Almost all of them were Sikhs.

At that time, Indians, even though they were British subjects, were kept out of Canada by an order-in-council requiring them to come to Canada by continuous passage from India, service that no steamship line provided.

The order was challenged successfully in court in 1913, leading to the Komagata Maru's journey.

But the ship was kept waiting in Vancouver harbour for two months, with most of its passengers detained on board while immigration officials manoeuvred to keep them out of court. On July 20, the naval cruiser HMCS Rainbow arrived as a manifestation of intimidating state muscle and, on July 23, the Komagata Maru weighed anchor and sailed back across the Pacific to Calcutta, where 20 of its passengers were killed in a shootout with colonial police suspicious of their politics and others were jailed for refusing to return to the Punjab.

Twenty-five years later, the persecution and genocide of two-thirds of Europe's nine million Jews was well launched when the captain of the passenger liner MS St. Louis, carrying 907 German Jewish refugees, asked permission of the Canadian government to dock in Halifax.

The Jews were the only Other who were part of European civilization (the Gypsies were mere vagrant children and a nuisance), uncomfortably close-up, perceived as undermining the broader culture with their non-conformism and clothed with the mythological mantle of Shylocks and Christ-killers.

In 1939, all governments of the Americas refused the St. Louis permission to land. Franklin Delano Roosevelt's administration in the U.S. didn't even bother to reply to the captain's request but dispatched a coast guard vessel to make sure the ship didn't get too close to land as it sailed north along the Atlantic seaboard. Canada was the last hope.

A group of prominent Canadian businessmen and academics sent prime minister Mackenzie King a telegram urging him to allow the ship to dock in the name of "true Christian charity."

But Mr. King felt that the St. Louis "was not a Canadian problem." Justice minister Ernest Lapointe declared himself "emphatically opposed." And immigration director Frederick Charles Blair said no country could "open its doors wide enough to take in the hundreds of thousands of Jewish people who want to leave Europe: The line must be drawn somewhere."

The St. Louis returned to Europe. Many of its passengers died in the gas chambers of the Nazi Third Reich.

A film was made about the St. Louis in 1976 - Voyage of the Damned. Award-winning Canadian director and screenwriter Deepa Mehta is making a film about the Komagata Maru.

In a 1972 essay on migration and the efforts of millions of the world's poor and oppressed and casualties of conflict to get to a better place on the planet, Irish author Conor Cruise O'Brien wrote: "The advanced world may well be like, and feel like, a closed and guarded palace in a city gripped by the plague."

The great boat-people success story in Canada, of course, has been the refugees from Indochina - the Vietnamese, Vietnamese Chinese, Lao and Kampucheans who now number a quarter of a million people, most of them originally sponsored in the late 1970s and early 1980s by church and community groups with federal government assistance after the U.S.-supported South Vietnamese government fell to the North Vietnamese communists. Most of the refugees were highly educated professionals who fit quickly into Canadian society.

Similarly, the so-called Mariel boatlift of 130,000 Cubans to the United States over a few short months of 1980 transformed Miami.

"First, they have been displaced as a result of a conflict elsewhere in the world, and therefore are often deemed as 'someone else's problem.'

"Second, they have been displaced often as a result of an armed conflict with another ethnic community. And as history is written by the victors, representatives of the ethnic community who displaced the boat people are often quick to sound an alarm about the supposed inherent dangers that the boat people represent. These attempts at negative public relations can be successful because they activate xenophobic responses in citizens of the prospective host country.

"Third, it has long been established in social psychological research - the 'bystander' studies - that human beings tend to be more helpful to persons in need when they are perceived as attractive and possess characteristics similar to bystanders."

Increasingly, of course, just about everyone now looks Canadian. Which may already have helped the Rohingyas, who are possibly the most unloved people on Earth.

Few people outside the corner of Southeast Asia where they come from have heard of the Rohingya. They claim to be both an ethnically distinct group descendant from the first Muslims who migrated into western Burma (now Myanmar) in the eighth century and a mixture of Bengalis, Persians, Moghuls, Turks and Afghan Pashtuns who came to the area somewhat later.

In any event, under the current rulers of Myanmar, they have been denied citizenship, subjected to various forms of extortion and arbitrary taxation, land confiscation, forced eviction and house destruction, torture, extrajudicial executions, relocation without compensation, forced labour on roads and at military camps, and financial restrictions on marriage.

Half a million Rohingyas have crossed the border into Bangladesh, where they claim to have been subjected to illegal force to return home. Their boat migrations to Malaysia, Indonesia, Thailand, Australia and elsewhere in the region have been grim horror stories with accounts of being robbed and murdered by pirates and pulled back out to sea by authorities when they've attempted to land, and left in rotting boats without food, water or power and interred on tiny, remote islands in the South Pacific and refused the right of repatriation by the Myanmar government, which claims they are not citizens.

Canada has accepted a few. Australia announced two years ago that it would consider applications from Rohingyas held on an island under its so-called Pacific Solution - whereby thousands of islands governed by Canberra were excised from the "Australian migration zone," meaning boat people held in detention camps had no legal right to apply to enter the country.

That still leaves a lot of Rohingyas nobody wants. Maybe if they and the Tamils and the rest travelled by plane …

Globe and Mail reporter Rod Mickleburgh discovered nearly 10 years ago that refugee claimants arriving by plane at Vancouver airport were almost never detained, were soon given access to social and medical benefits, were rarely deported and had a cracking good chance of being smuggled into the U.S.

Most claimants arriving on filthy, rusting ships or stowed away in containers, on the other hand, saw the inside of jails, lost their applications for refugee status and were deported. Immigration officials say it's because the boat people are being trafficked by organized criminals.

There's trafficking by plane, as well. But maybe it doesn't look as bad.

Tamil migrant ship is a test, Toews says, and more boats are on the way
August 13, 2010
Opinion
No apologies for vigilance
August 13, 2010
Fate of ship steered by two forces - Ottawa and Tamil diaspora
August 12, 2010 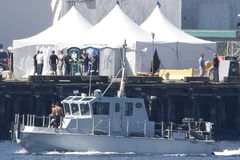 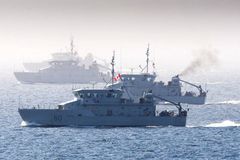 Boatload of migrants a wake-up call for Canada
August 11, 2010 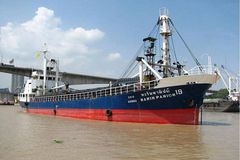 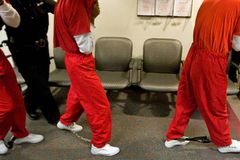