Leaders of the world's eight foremost industrialized economies have established an aggressive new marker in the battle against climate change: holding the global temperature to a two-degree-Celsius increase.

To get there, the leaders agreed that the world's 32 industrialized nations should slash their greenhouse-gas emissions 80 per cent by 2050, though they did not agree on the base year from which the cuts would be made.

The G8 agreement will put added pressure on the Harper government to revise its climate-change plan to force deeper emission cuts than it currently proposes, John Drexhage, an Ottawa-based analyst with the International Institute for Sustainable Development, said Wednesday.

"You can always finesse things in terms of what your allocation [for emission cuts]will be," Mr. Drexhage said. "But by and large, the two-degree mark would call for reductions of a greater stringency than the current Conservative plan."

The Group of Eight nations still have a substantial sales job on their hands as they try to persuade emerging economies like China and India to take a large share of the load. Representatives of those nations laid down their own line in the sand Wednesday night, saying they won't allow greenhouse gases to be cut on the backs of their poor. The two sides meet Thursday.

"The emerging economies will be hit as hard, if not harder, by climate change as anyone, so it's important for them to realize the necessity of making commitments," Prime Minister Stephen Harper said Wednesday after finishing up the first day of meetings in this central Italian city that was so devastated by last April's earthquake.

G8 members agreed that they would support a goal of keeping the world's average temperature from rising by more than two degrees Celsius above pre-industrial levels. Climate scientists predict that a greater increase in global temperatures would cause catastrophic droughts and flooding for much of the world's population.

Environment Minister Jim Prentice acknowledged last March that a 2.5-degree threshold was critical, but Ottawa had not signalled its willingness to endorse a global commitment until this week.

U.S. President Barack Obama had also resisted the inclusion of a two-degree mark in the G8 communiqué, though legislation passed by the House of Representatives and now being debated in the Senate sets the 2-degree threshold as a target.

To keep temperatures from rising too far and too fast, the eight nations agreed that the world's industrialized nations - 32 in all - would seek cuts to greenhouse-gas emissions of 80 per cent by the year 2050. Previously, the G8 agreed to a 50-per-cent cut by 2050, but that was a goal for the whole world, rather than for just industrial nations.

However, they could not agree on a base year from which to measure the reductions, meaning the 80-per-cent figure is somewhat vague.

A Russian official even questioned the target just hours after President Dmitry Medvedev agreed to the number. "For us, the 80-per-cent figure is unacceptable and likely unattainable," Arkady Dvorkovich, Mr. Medvedev's top economic aide, told reporters.

"We won't sacrifice economic growth for the sake of emission reduction," he added.

Environmentalists and European countries are demanding that emissions be reduced from their 1990 levels, while Canada and the United States have vowed to cut them from 2006 and 2005 levels, respectively.

Canada's oil industry faces huge pressure to slash emissions even as it hopes to dramatically expand production in Alberta's oil sands, the fastest growing source of emissions in the country. The government has also targeted the coal-fired power sector, and is expected to announce a regulatory framework for the utility sector before the end of the summer.

A senior official at the Canadian Association of Petroleum Producers said any effort to fight climate change must be a "shared commitment" among all countries.

"The Group of Eight has identified the major hurdle, which is to create a common set of rules that recognize and achieve a shared, global goal of tackling climate change, without creating a disadvantage for individual nations," association vice-president Roman Cooney said.

Robert Skinner, a Calgary-based vice-president at Norway's StatoilHydro ASA, called the 80-per-cent target "sloganeering" and "incredible, in the literal sense of incredible."

It simply does not seem possible to achieve such an enormous greenhouse-gas reduction using the tools currently at society's disposal, including energy efficiency gains and renewable energy, he said.

Emerging economies like China and India are not characterized as industrialized countries and have argued for different levels of commitments for emerging economies, with India adamantly opposing emission targets.

The so-called G5 - China, India, Brazil, Mexico and South Africa - warned that it is the wealthy nations that must lead the way.

"Climate change cannot be addressed by perpetuating poverty on emerging countries," he said.

"We don't want to continue to be second-class citizens. We want to go to the top floor."

Clare Demerse, associate director of the Pembina Institute's climate-change program, said the result was a mixed bag. Although she welcomed the two-degree limit and the new targets - saying it would force Canada to do more - the agreement did little to establish mid-term goals for the year 2020, something the emerging nations were looking for.

"This is a welcome statement from Canada," said Ms. Demerse of the two-degree goal. "The impacts of climate change beyond the two-degree-Celsius threshold are projected to be catastrophic, especially for some of the world's poorest people."

The poorer countries are also demanding that the developed world allocate vast amounts of cash to help them adapt to climate change and reduce their own emissions.

British Prime Minister Gordon Brown had pushed to create a $100-billion (U.S.) fund by the year 2020 to help in mitigation efforts, but failed to win support from other G8 members.

Alden Mayer of the U.S.-based Union of Concerned Scientists said the developing countries have a right to be concerned about the financial issue.

"They feel they haven't seen any good-faith efforts here," said Mr. Mayer in an interview. 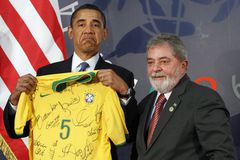 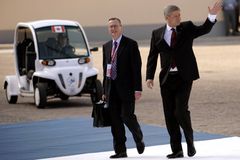 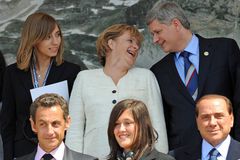 Climate bill hits setback in U.S. Senate
July 9, 2009
Follow Shawn McCarthy on Twitter @smccarthy55
Report an error
Due to technical reasons, we have temporarily removed commenting from our articles. We hope to have this fixed soon. Thank you for your patience. If you are looking to give feedback on our new site, please send it along to feedback@globeandmail.com. If you want to write a letter to the editor, please forward to letters@globeandmail.com.
Comments