"We have to embrace this," the Finance Minister said last Wednesday of his province being placed on negative watch by one of the leading bond-rating agencies, the day before it was downgraded by another of them. The implication was that all Ontarians, not just their government, have to take it as a challenge to get back to budgetary balance – and make some sacrifices along the way.

It was sound advice, however self-serving. But it would have carried more weight if the government hadn't committed, the same week, to a populist policy that continues a pattern in which politicians shield most Ontarians from the realities ahead.

Setting aside the abrupt manner in which it was adopted, as a sop to the NDP that the governing Liberals barely had time to consider, the new surtax on people who make more than $500,000 annually might be a perfectly reasonable policy. Certainly, it's one of the more low-impact ways to shave a few hundred million off the province's $15-billion deficit.

But coming as the only personal tax measure the government would even consider, it also contradicted the worthwhile story Mr. Duncan was trying to tell.

Most Ontarians don't pull in $500,000-plus a year – most of us aren't even friends or family of someone who does. It's a pretty exclusive club: not the 1 per cent, even, but more like the 0.2 per cent. So no wonder the new tax, more of a talker than nearly anything else in the government's budget, is overwhelmingly popular.

And no wonder many people still think the deficit, and the related fight to secure the long-term sustainability of core social programs, is someone else's responsibility.

It wasn't exactly clear, in last fall's election, whose responsibility the province's fiscal future was. But the basic message from all three parties was that we could all continue to pay the same or less, in return for the same or better public services going forward.

Heading into this year's budget, and in the document itself, the Liberals finally acknowledged there would be a degree of pain. In at least one instance – their pledge to take a hard line on new contracts for teachers and other workers in the broader public sector – they appear willing to tangle with people who helped elect them.

But otherwise, even the ostensibly tough measures aren't very tough for the people whose votes the Liberals want. Ending provincial support for the horse-racing industry or unloading the money-losing Ontario Northland Transportation Commission, however warranted, won't get much notice in the Greater Toronto Area – the key battleground the Liberals keep winning.

If anything, the Liberals' opponents have been even more prone to lend false comfort.

In the last campaign, Tim Hudak's Progressive Conservatives ran on the premise that Ontarians are paying too much for the services they have – committing to most of the same spending priorities as the Liberals, while offering various forms of pocketbook relief. The dubious premise seemed to be that if the government just wasted less on bureaucrats and insiders – in other words not you – the money problems would go away.

PC insiders promise that, next time around, Mr. Hudak will run on a much more small-c conservative platform, presumably including controversial changes to existing programs. If so, it appears he'll do so without much meaningful counter-argument from the left.

In lieu of spending cuts, Andrea Horwath's New Democrats might reasonably be expected to argue that many of us should pay a little more to preserve core services. Instead, while lamenting various proposed cutbacks, Ms. Horwath has continued to present all but the richest of the rich (and faceless corporations, which she also wants to tax a little more) as overburdened already – proposing sales-tax relief, for instance, that would be directed largely toward the middle class.

Somewhere out there, there's a really good debate waiting to happen about what choices we need to make, in order to maintain – even improve on – the essentials of the lifestyle to which we've become accustomed. Perhaps the next campaign, unlike the last one, will help with that. But that would require the parties to level with people they think might actually vote for them. Otherwise, rather than the sort of embrace Mr. Duncan had in mind, we'll just keep joining in group hugs – with one hand kept free to point at whoever we're told is really to blame.

Dwight Duncan's crutch could end up tripping him 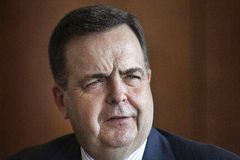 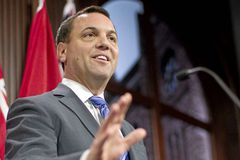 Ontario set for a top-to-bottom review of spending 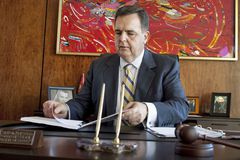