My flight from sweltering Regina to Toronto had been delayed by an hour. By the time we landed at Pearson, I had 12 minutes to make my connecting flight to St. John's.

Hurrying past deplaning passengers, I paced across the terminal to gaze up at the list of departures. Air Canada 696 to St. John's. Delayed by two hours.

My brain stammered at the thought of two hours wandering through the airport's surreal limbo, while my ears pricked up at the sound of an angelic voice: "This is a final boarding call for Air Canada 122 to St. John's. Gate 132. Final call."

If I jogged haphazardly, knocking old ladies aside, and punting a rat-sized yapper toward the specialty chocolate shop, I might be able to flee this fortress of glass earlier than anticipated.

Making it to the gate, I eyed the pale blue plane at the end of the ramp, able to whisk me home to the loving coolness of St. John's.

I approached the desk, where three agents, caught up in a fit of spastic typing and frenetic energy expulsion, tried their best to get in each other's ways.

One of them, a stout, blonde-haired woman, shot a look at me, extended her hand and agitatedly called out: "Name."

I stated my name and handed over my boarding pass. "I'm on the St. John's flight delayed two hours."

"No," said the woman at once, her voice clipped by some regressive military accent, vaguely Russian or Eastern European. "Too late."

Frowning in dissatisfaction as my easy-fix evaporated, I noticed a figure hurrying down the wide corridor.

"Name," called the woman, thrusting out her hand again as though to grasp hold of the drowning.

"Bob Rae," said the pink-faced hobbit of a man, his glasses and suit looking a touch too big for him. "I'm on the delayed St. John's flight."

"No," snapped the militant attendant. "Too late." Her eyes caught on yet another lost soul and her fingers wiggled for his boarding pass, "Name."

The man - identified as one of the blessed who belonged on the flight - was embraced as a comrade.

My eyes returned to Bob Rae to hear him utter: "I am Super Elite." He spoke the words nervously, his flushed face glistening with sweat.

I glanced around the waiting area. Not a single person in any of the seats. I stepped back and sat to take in the show.

At that point, as though from out of nowhere, a woman with long, dirty-blonde hair, dressed in dark-blue Air Canada uniform, jacket and skirt (the others were in pale blue minion shirts) stepped over to a podium featuring a single computer.

Meanwhile, Bob Rae diminutively trailed after her. He fidgeted and glanced back at the other attendants. He said nothing. The high-ranking Air Canada attendant said nothing. A compelling scene of silent collusion.

The woman's fingers clicked the keyboard, while her eyes searched the screen. Newly invigorated, she strode back to the other attendants and spoke in low tones.

Desperately straggling after her, Bob Rae took out his wallet and snapped down a glinting card on the faux marble countertop. He held his thumb on it, his gaze steady on the card.

"I am Super Elite," he said again, this time with more worry in his voice, as no one seemed to be paying him any attention. He poked his glasses up and roughly coughed to clear his throat, as though to deepen his voice.

The woman in the blue suit whispered to the others, her eyes taking a furtive peak at me. She then went back to her podium while Bob Rae faithfully waggled along.

The sound of a boarding pass being printed brought me to my feet. I paced to the desk. "I was here before that man," I complained to the harried attendant.

Bob Rae avoided my look of indignation. He was too busy being led down the loading ramp by his guardian in the blue suit.

"I thought you said there were no seats."

The woman shrugged. "Leave me alone to do my work."

"I'm not stopping you from doing your work. Who was that woman in the blue suit? What's her name?"

"You can ask her when she comes back. Now, I have to do my work."

"Leave me alone. Or I will call security." She picked up a phone and held it ominously to her ear.

"I am not stopping you from doing your work." Regardless, with visions of probing searches by burly, latex-gloved security guards, I backed away and sat. Miffed, I imagined Bob Rae snapping that glinting card down on the countertop. Super Elite. A status he attained by flying around the country on taxpayer's money, representing stranded, economy-class people like me.

"It was Bob Rae," I said again, glancing around for the arrival of security. "He used to be the premier of this province."

"I don't know," replied the woman, busily clicking keys. "But he's Super Elite." She finished up by making a call to the plane, giving it the green light to depart.

I watched the plane taxi away from the ramp and I imagined Bob Rae settling in his seat, making affable comments to the other passengers, smiling at the attendants who delivered him his glass of champagne. The fallen king of socialism on his flying throne.

Suddenly hungry, I wandered off to order a slice of pizza and a bottle of beer. I snapped down my credit card with newly-attained Bob Rae bravado, but no one seemed to care. "I am Super Elite," I said, and the cashier laughed. I sat on a hard stool and ate, biding my time like a commoner. 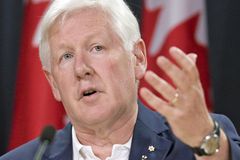