History will record that Governor-General David Lloyd Johnston, the 70th successor to Samuel de Champlain, presided with his typical pleasant and informal graciousness over the sesquicentennial anniversary celebrations, one of his final acts of service as the Queen's representative to this Dominion.

If the speculation is true, Prime Minister Justin Trudeau will advise the Queen of his choice for Mr. Johnston's successor when he visits her at Holyroodhouse in Edinburgh this week. We can imagine what qualities the Prime Minister is seeking in Mr. Johnston's replacement. But we first pause to pay tribute to Mr. Johnston, a long-serving and dedicated Governor-General, the 28th since Confederation.

When Stephen Harper chose David Johnston, a former law professor and university president, as governor-general in 2010, many viewed his appointment as a safe, if rather bland, alternative to Michaëlle Jean, a former broadcaster who had been forced in 2008 to decide whether to take Mr. Harper's advice to prorogue Parliament or to permit his government to fall. (Constitutional scholars still debate the wisdom of her decision to accept his advice.)

In the wake of that episode, and after three consecutive minority governments, it seemed prudent to have an experienced legal authority at Rideau Hall, in case an unstable Parliament generated another crisis of governance.

But the next election resulted in a majority Conservative government, and so Mr. Johnston settled into the mostly ceremonial life of a governor-general. The former president of University of Waterloo championed innovation through the new Governor-General's Innovation Awards and the Rideau Hall Foundation. He also placed a strong emphasis on Indigenous reconciliation.

Mr. Johnston raised a few eyebrows when he replaced the Caring Canadian Award with the Sovereign's Medal for Volunteers. The upgrade made the new award part of the honours system. Some, however, interpreted the move as an effort to strengthen the role of the Queen in Canada, undermining the efforts of some of Mr. Johnston's predecessors to assert the primacy of the office of governor-general itself as the head of state in Canada. But all of this was said sotto voce.

His greatest service might have been his willingness to stay on for an additional two years, even though he and his wife, Sharon, were looking forward to their retirement. (Both are in their mid-70s.) As Mr. Johnston's five-year term approached its end in 2015, a looming federal election offered the possibility of a hung parliament, in which – if the polls of the time prevailed on election day – the NDP and Liberals might combine to bring down a minority Conservative government immediately after the Throne Speech.

A new and inexperienced governor-general might be faced with making another decision about whether to allow the leader of the official Opposition to seek to form a government, or to dissolve the legislature and call an election. The conundrum is as old as the King-Byng crisis of 1926 and as contemporary as Lieutenant-Governor Judith Guichon of British Columbia's decision last Thursday to invite NDP Leader John Horgan to form a government, after Christy Clark's Liberals were defeated in a vote of confidence.

To ensure a steady hand at Government House in the event of postelection uncertainty, Mr. Harper asked Mr. Johnston to stay on and to preside as well over the 150th anniversary celebrations. The Johnstons agreed. Now, finally, they will be able to return home and further spoil their 14 grandchildren.

Who will replace him? The choice of governor-general is a closely guarded secret that, to this writer's knowledge, has never been leaked. But we can speculate on what Mr. Trudeau is looking for in his first federal viceregal appointment.

By the rule of rotation, the next governor-general should be a francophone. He or she will probably be younger, to reflect the youthful image that this government likes to project. Mr. Trudeau would no doubt like to choose a woman, to reflect the gender balance that Mr. Trudeau established in his cabinet. Since Jeanne Sauvé was appointed in 1984, Canada has had three female and three male GGs.

No doubt the Prime Minister would very much like to nominate Canada's first Indigenous governor-general. In the past, this proved difficult. It was said that Mr. Harper very much wanted to appoint an Indigenous governor-general in the wake of his landmark apology for the abuses of the residential school system. The trouble has been the difficulty in finding a distinguished Indigenous Canadian who is fully bilingual.

Ideally, then, the next governor-general will be a bilingual, female, Indigenous francophone. Whoever they may be, however, the Queen's 29th representative will not easily surpass their predecessor's calm wisdom and steady assurance. We owe a debt to Champlain's latest heir. 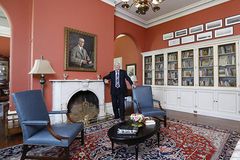 Prince Charles, Camilla met by thousands of people to celebrate Canada 150
July 1, 2017
Follow John Ibbitson on Twitter @JohnIbbitson
Report an error Editorial code of conduct
Due to technical reasons, we have temporarily removed commenting from our articles. We hope to have this fixed soon. Thank you for your patience. If you are looking to give feedback on our new site, please send it along to feedback@globeandmail.com. If you want to write a letter to the editor, please forward to letters@globeandmail.com.
Comments