As October 19th draws near, the federal leaders are under pressure to convince undecided voters to cast ballots for them. Here's what the Tories, Liberals and New Democrats are doing on the final weekend of the election campaign: 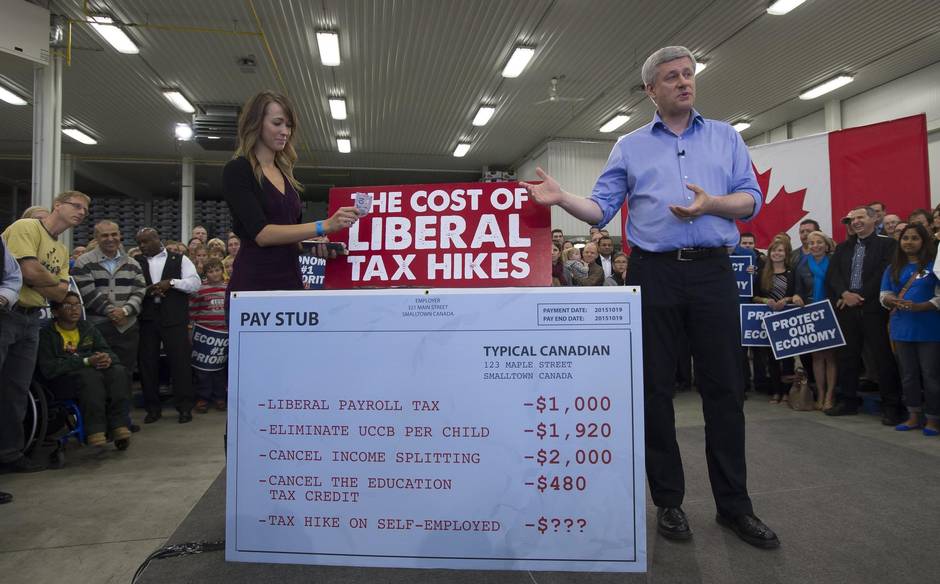 Conservatives: A familiar refrain - stacks of cash and a bell

Like a show stuck on repeat, Conservative Leader Stephen Harper will spend the final days of the 2015 election campaign reprising a stunt with piles of Canadian currency and the ring of a cash register bell.

His target remains Liberal Leader Justin Trudeau and his strategy remains the same as the last two weeks: trying to shift the ballot question away from time for change to "Which leader will leave more money in your pockets?"

That explains the re-enactment each campaign stop of cash being piled in front of a sign representing tax hikes the Conservatives say will come under a Liberal government – complete with a dinging bell to signify the rising tally.

On Saturday, Mr. Harper wakes up in Fredericton, N.B., following a Friday night rally for candidates in this small province. The Conservatives feel it represents their best chances in Atlantic Canada, where the Liberal Party's appeal is strong in 2015.

The Conservative Leader will then return to Quebec one last time for a campaign stop in Montreal as the party remains hopeful they will pick up seats in this province.

Then Mr. Harper flies to Toronto for a final rally in the region that holds the most votes in Canada. Former Toronto mayor Rob Ford and his brother Doug say they're mobilizing their political support base – known as "Ford Nation" for this event that is meant to showcase candidates for 55 Greater Toronto Area seats.

On Sunday morning – the last day of campaigning – the Harper tour heads to British Columbia. It's been another tight battle with the Liberals and NDP here but the Tories privately say they feel their prospects remain good in B.C.

Finally, on Sunday night, Mr. Harper arrives in his hometown, Calgary, wrapping up his 78-day fight to retain the Prime Minister's Office.

The mood on the Harper tour this week has been a mix of resignation that they might lose and hope that the polls suggesting a 6-point Liberal lead are wrong. Conservatives remain confident their get-out-the vote machine is as strong as ever and that they could make up the difference by more effectively mobilizing voters. 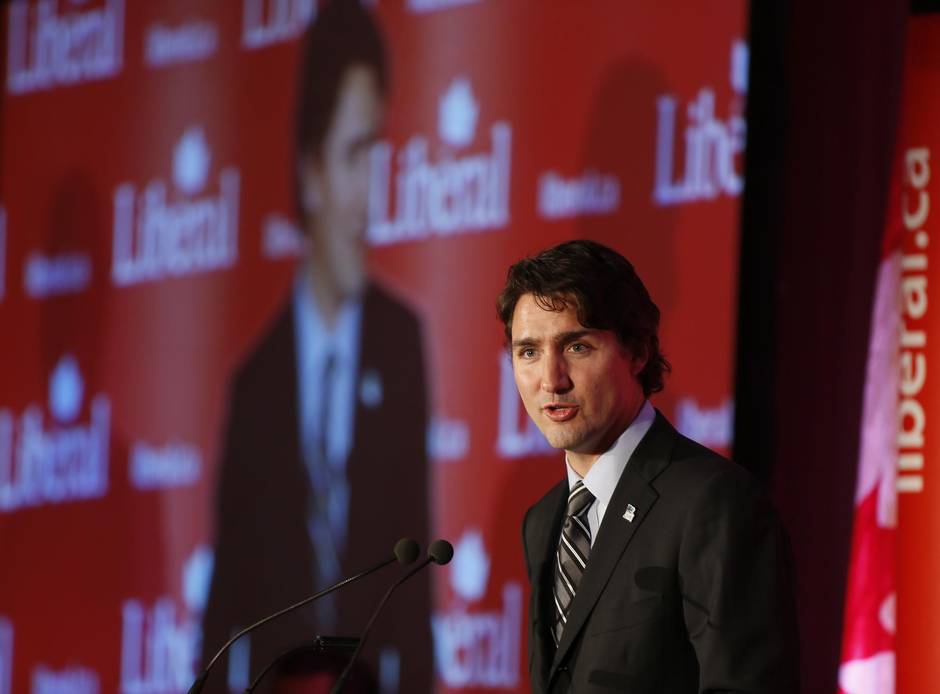 (Christinne Muschi for The Globe and Mail)

Liberals: A cross-country trek back to where the campaign began

The Liberals are preparing a two-day cross-country tour feeling they are heading toward victory, but still concerned about the impact of the mid-week resignation of their campaign co-chair.

Party insiders are predicting they will take down a number of sitting Conservative and NDP MPs across the country, with inroads even in Alberta, saying their internal numbers mirror the overall trend that is placing them in first place in national polls.

The big question mark is the impact of the revelations that former campaign co-chair Dan Gagnier provided advice to one of his clients, TransCanada Corp., on the best way to lobby the next government. The Liberals are privately blaming the Conservatives for leaking the story on Wednesday, but the New Democrats have been the most aggressive on the file.

Mr. Trudeau has criticized Mr. Gagnier’s actions as inappropriate and said his resignation was the responsible thing to do. Still, it may not be enough to satisfy NDP supporters who were contemplating switching to the Liberal Party to defeat the Harper government, but now have concerns about business lobbyists infiltrating a Liberal government.

On Saturday, the Liberal Party will start with a rally in Halifax followed by an event in St. John, NB, hoping to cement their lead over their rivals in Atlantic Canada. The tour then heads west, with stops in Thunder Bay and Winnipeg.

On Sunday, Mr. Trudeau will attend events in Edmonton and Calgary, to showcase that he is serious about getting Alberta MPs in his caucus. The campaign will finish where it started more than two months ago, in British Columbia, with stops in Vancouver and Surrey on Sunday evening.

The party spent it last day in the GTA on Friday trying to counter the Conservative Party’s allegations that Mr. Trudeau would end income-splitting for seniors to pay for his expensive platform. Party officials feared that the Conservative attacks were spreading among seniors.

Mr. Trudeau campaigned at a retirement home alongside former Mississauga mayor Hazel McCallion, who has participated in a television and online ad that defends the Liberal plan.

The spot has already generated more than one million hits on the Internet, and Mr. Trudeau hugged Ms. McCallion as he saw her on Friday, calling her a “social media superstar.”

The Liberals are hoping for a high turnout on Oct. 19, with senior members of the campaign predicting that this time around, it won’t be the Conservative numbers that will beat the pollsters’ predictions, but their own. 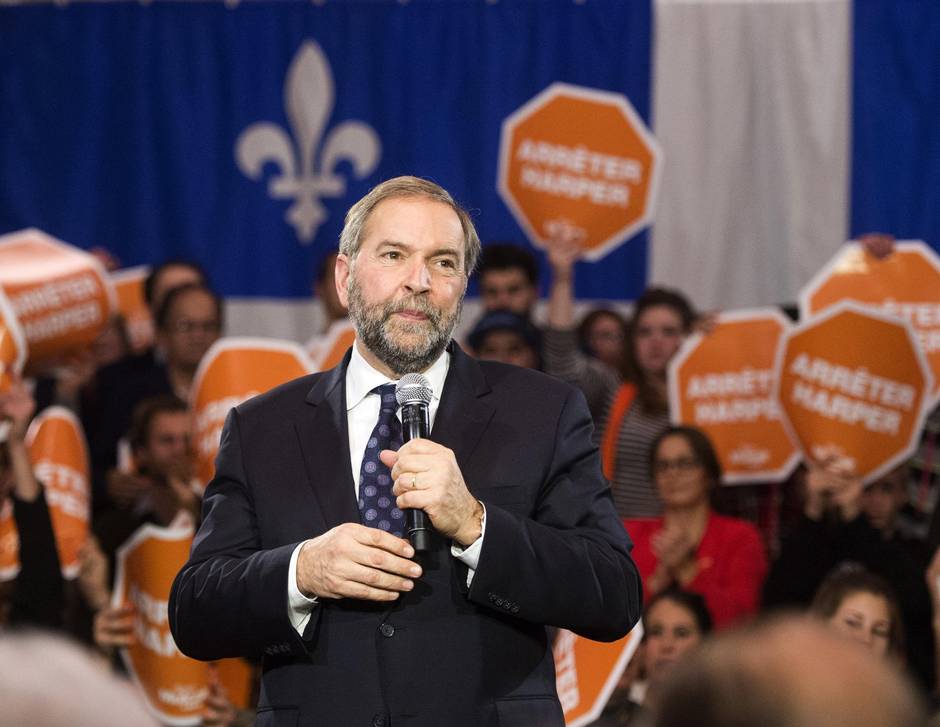 NDP: A big push into the West, with an eye on Quebec

Tom Mulcair is addressing supporters at rallies in four of Canada’s largest cities this weekend to mark the end of a long election campaign that saw his party sink from first to third in the polls.

The NDP Leader is still intent upon picking up seats that could swing from blue to orange in regions where support for New Democrats is sufficiently strong, and at a time when many Canadian voters seem bent on a change.

He was introduced at an event on Friday night in Edmonton by Alberta’s NDP Premier, Rachel Notley. Then he will speak to a crowd at a Vancouver convention centre on Saturday morning, another in Toronto on Sunday, and a large gathering of his troops in Montreal on Sunday night.

As the campaign draws to a close, the NDP Leader’s main message remains what it was when the writ was dropped back in August: That only New Democrats can beat Stephen Harper’s Conservatives.

It may seem somewhat improbable at a time when Justin Trudeau’s Liberals have more than a 10-percentage point lead in most public opinion surveys. But Mr. Mulcair’s strategists say they are getting a positive response at doorsteps to the argument that the NDP started the election with far more seats that the Liberals and therefore have a shorter climb to victory.

The new Democrats also believe, with a couple days left in the campaign, they have a new weapon in their arsenal – the whiff of something that can be painted as Liberal corruption.

Mr. Trudeau’s campaign co-chair, Dan Gagnier, was forced to resign after it was revealed that he recently advised TransCanada about the best way to lobby the next government on the construction of the Energy East pipeline – a turn of events that could not have come at a better time for the New Democrats who needed something to give them traction.

The New Democrats say that reminder could have an especially strong positive effect for them in Quebec where they won 59 seats in 2011 and, in some cases, are now fighting against Liberals to keep them. The party has thrown together last-minute advertising to capitalize on the Gagnier affair and French Quebeckers who listen to their radios this weekend will hear NDP MP Alexandre Boulerice lamenting the dark ways of Liberal lobbyists.