The federal Conservative Party shed its official aversion to same-sex marriage over the weekend as it tries to broaden its appeal to urban and younger voters, but the contest to pick a leader who can connect with Canadians has yet to take shape.

Conservative rank-and-file members voted 1,036 to 462 to remove the traditional definition of marriage – between one man and one woman – from their statement of official policies.

All of the declared and potential leadership candidates to succeed former chief Stephen Harper attended the Tory party's Vancouver policy convention that ended Saturday. But none generated the kind of overwhelming buzz that might signal a clear front-runner.

Still, the Conservative gathering was more upbeat than might be expected for a party thrust into the political wilderness after nearly a decade in power.

More than 3,000 people were on hand, including 2,300 delegates – numbers that outweighed attendance at the last Conservative convention in 2013, when the party was still in power.

Party finances appear strong. Irving Gerstein, chair of the Conservative Fund, told delegates the party has paid off the debt incurred to fight the lengthy 2015 election and raised $5.7-million so far in 2016 – an amount he called a record first-quarter haul for the Tories in a non-election year.

Former Harper cabinet minister Jason Kenney admitted he had anticipated a gloomier mood in Vancouver. "Many of us expected to be here at a bit of a wake," he said.

There are no signs so far that the party is splitting into the Red Tory and Reform factions that united in 2003 under the Conservative banner and the leadership of Mr. Harper, who became prime minister in 2006.

The decision on Saturday to jettison the traditional definition of marriage from official Conservative Party policy was a test of party unity. While rank-and-file Conservatives have yet to decide who is best to unseat Liberal Prime Minister Justin Trudeau, a strong majority agreed it was time to better reflect a country that legalized same-sex marriage more than 11 years ago.

Even Mr. Kenney, the Calgary MP long considered a standard bearer for the party's conservative wing, was unequivocal about the need to strip the traditional definition of marriage from Conservative doctrine.

"I think it's a no-brainer. This issue was resolved 10 years ago. There is no point in having ... obsolete language about something that was changed in law and society a decade ago," he said.

Conservative organizers and delegates, speaking on condition of anonymity, said the party's social-conservative wing appeared reduced in strength and voice at the convention, which began on Thursday with an official send-off for Mr. Harper. He stepped down as party leader after losing last fall's election to Mr. Trudeau, and is set to resign his Commons seat in the summer months.

The official vote to choose a new leader is nearly one year from now and it appears it could take months before the the full suite of candidates enters the race. Two potential heavyweight contenders, Mr. Kenney and ex-justice minister Peter MacKay, are still undecided.

In Vancouver, Mr. Kenney hosted a hospitality suite for convention delegates – a traditional exercise for would-be candidates – that drew a packed crowd at the private Terminal City Club, but he also acknowledged he's considering entering politics in Alberta, where two parties – the Progressive Conservatives and Wild Rose – are splitting the right-leaning vote.

Mr. Kenney said he will decide his future before the end of the summer.

"I have got a lot of encouragement to run for the Conservative Party national leadership – which has been deeply reinforced at this convention," he said. "I also have a lot of people encouraging me to contribute to uniting Albertans to defeat the NDP.

"After 19 years in Parliament, I have to be prepared to make a long-term commitment, which is not easy and automatic, and I need to make sure that it would be right for the party," Mr. Kenney added.

Mr. MacKay, who was repeatedly mobbed by delegates to take photos with them, said he has to decide whether he has the "fire necessary" to pursue the leadership. "The key issue is whether it's the right time for me and whether I have the drive. ... It's a major life-altering decision."

The former Nova Scotia MP called the vote on same-sex marriage "a demonstration of the maturation of our party."

Mr. Harper isn't entirely fading from the picture. He is slated to soon become a director of the Conservative Fund – the party's powerful fundraising arm.

The convention offered evidence of how the Tories are changing without the influence of Mr. Harper – opening all policy debate sessions to the media, a first for the party. But it also meant that journalists were present on Friday to witness a Muslim Conservative supporter accusing party brass of unfairly targeting Muslims during the 2015 election campaign.

Urz Heer, from the riding of Brampton South in the Toronto area, told the party's executive director, Dustin van Vugt, that the Conservatives made her feel like an outsider. She was referring to Tory promises to introduce a public-sector ban on niqabs and a hotline to report "barbaric cultural practices."

Toronto-area MP Lisa Raitt, another potential leadership contender, said she's proud of how the Tories opened up their debates to journalists. "Think about it in terms of a workplace: We just did a performance review in public."

TV celebrity and businessman Kevin O'Leary, who has taken out a membership in the Conservative Party, also attended the convention as he mulls a run for the helm. 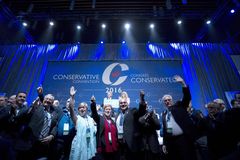