In her orange blouse and mesh cowboy hat, Rathika Sitsabaiesan cuts a striking swath through the stalls at the 10th annual Scarborough Rotary Ribfest in northeastern Toronto. It's a sweltering Saturday, and the MP for Scarborough-Rouge River is, like any good pol in the summer, where her constituents are – although for the two-thirds of them who are immigrants, the greasy, tangy Southern rib experience might be a relatively new one.

After a bit of glad-handing on the lawn where a Patsy Cline tribute band is playing, Ms. Sitsabaiesan (pronounced SITS-a-bye-EE-sin) spots a familiar face. Kneeling in, she buttonholes the spiky-haired nine-year-old sitting under an umbrella with his family. At a recent town hall on education, Ms. Sitsabaiesan had heard the story about the lack of teachers at the boy's school. "Are you going to write a letter to your trustee like I told you?" she asks him.

They don't, as it turns out, live in her riding, and it's not a federal issue – and at moments like this, Ms. Sitsabaiesan comes across as a classic, you might almost say conventional, New Democratic Party activist: Talk of empowerment and social justice falls easily from her lips, and the urge to sign up another recruit, send another letter, is never far from her mind. She puts a new face on some enduring NDP values, while reaching deeper into first- and second-generation immigrant communities – a growing demographic that Conservatives successfully courted in the May 2 election, but which the NDP has, for decades, been slow to connect with.

To some, Ms. Sitsabaiesan was a surprise winner in that election, in which she beat Conservative Marlene Gallyot by 5,000 votes, with the incumbent Liberals (represented by new candidate Rana Sarkar) relegated to third place. But her victory isn't just a story of the federal Liberals' receding political fortunes. It's a story of a coming of age for an ambitious politician, her community and possibly her party.

For Ms. Sitsabaiesan might be the most compelling of the new crop of young NDP MPs. She's the first Tamil-Canadian MP, and so has become the de facto standard-bearer for thousands of Canadians who have felt defeated – militarily, in their country of birth, and politically, in their new home. As a 29-year-old woman from political cultures – both Canadian and Sri Lankan – in which older men make most of the decisions, she exudes the poise, organizing skills and confidence of an old-school political veteran.

Ms. Sitsabaiesan, the youngest of four sisters, was born in Jaffna, Sri Lanka, and tensions between that country's Sinhalese majority and Tamil minority soon erupted into civil war. "My mom basically had to smuggle us around the country to stay safe," she says, and so the family would often miss letters from their father, who had moved to Quebec City, and then Mississauga, just west of Toronto, shortly after Ms. Sitsabaiesan was born.

When she was 5, the family joined Mr. Sitsabaiesan in Canada. He was unemployed, on worker's compensation after an accident at a door-making factory ("He's still in permanent pain," Ms. Sitsabaiesan says).

That, however, didn't suppress the family's energies. "My father taught me how to be an MP," Ms. Sitsabaiesan recently told a conference in South Carolina. Together, they canvassed the community to sign up members for a new Tamil-language school. "That was my first act of being an agent of change," she says.

Ms. Sitsabaiesan may be an overscheduled MP today, but there has rarely been a time when she wasn't over-committed – as a child and teenager, it was dance classes, sports teams and work at a hospital.

"My mom wanted me to be a doctor, and my dad wanted me to be a lawyer," but Ms. Sitsabaiesan eventually chose commerce, leaving Toronto for Ottawa's Carleton University in 2003. There, her attention broadened beyond the Tamil community; she quickly moved into student politics, while working full-time so that she could wean herself off Ontario student loans. Along the way, she picked up an eclectic trio of political inspirations – Mohandas Gandhi, Diana, Princess of Wales, and Old Man River African-American crooner Paul Robeson.

"Rathika was always desperately moving ahead," says Carleton business professor Rob Riordan, who remembers her standing out – and speaking out – during her very first class with him. She was "trying to sweep up behind her to finish all the commitments she had, and lurching forward, into some destiny that I think only she could see."

"Being at Carleton got me ready to be more in the public eye," says Ms. Sitsabaiesan, who served as chair of Carleton's New University Government. An attempt to impeach her, which was quickly dispatched, helped with that. She says the uproar was over her efforts to make the government more collaborative, although her tenure is also remembered by some students, and recounted in the university's newspaper, The Charlatan, for the $3,000 her administration spent on lanyards, 10 per cent of their total budget.

Ms. Sitsabaiesan returned to Toronto, working for the Ontario Labour Relations Board and the University of Toronto Students' Union. She trained migrant workers; she volunteered with a neighbourhood association in Scarborough. Toronto labour activist and Ryerson University professor Winnie Ng remembers Ms. Sitsabaiesan's magnetic presence, and her industriousness. "I was really impressed with the level of her work. She followed through, she didn't just take credit."

She didn't immediately leap into politics, declining NDP entreaties to run in 2006 and 2008. "I had fallen into the trap of thinking politicians had to be old white men," she says.

But others urged her on. "The Tamil community came down the list and they thought Rathika was an ideal candidate," says Piragal Thiru, a director of the Canadian Tamil Congress. She stood out as a woman in a male-dominated field, and for her work outside the Tamil community, Mr. Thiru says.

The May, 2009, defeat of Tamil Tigers in the Sri Lankan civil wara conflict that killed as many as 100,000 people, raised the stakes in Ms. Sitasbaiesan's candidacy, which she won by acclamation in December, 2009: "The Tamil community has gone through a very sorrowful last few years," Mr. Thiru says. "Two years ago, massive numbers of Tamil Canadians were standing in front of Parliament and on the streets of downtown Toronto, urging somebody to do something. … They said, if we had a voice, it would be different."

Her victory became a community celebration. Her maiden speech in the House of Commons, delivered partly in Tamil at the urging of MP Peter Julian, Ms. Sitsabaiesan's mentor in the NDP caucus, has been viewed more than 100,000 times on YouTube. She is recognized by many of the Tamil Canadians at the Malvern Town Centre, a shopping mall in her riding. "I'm better with faces, not so good with names," she says.

Some members of the community inquire about her love life, hoping, for her sake, that someone can take care of her. However, Ms. Sitsabaiesan, who was once married ("It was a mistake," she says), says she is focused on her political work for now. "My marriageability index is still good," she laughs.

And she is taking her energies beyond her constituency. "I want the people who live in the ridings around us to recognize the value of having an NDP member." Last week, she spoke at a fundraiser for a visiting Hong Kong labour activist one night; the next morning, it was off to a Black Daddies Club picnic in Clarington, east of Toronto, featuring some of her constituents from the Malvern neighbourhood of Scarborough. She will soon be flying to Regina to support a provincial NDP candidate and to do some advocacy related to her portfolio as postsecondary-education critic in Parliament.

But her role as Tamil standard-bearer is, at the moment, never far from the surface. On a muggy Sunday evening, she canvasses Mayfair on the Green, a condo tower development in Malvern. She's magnetic and kinetic; with her Tamil-speaking constituents (about half of this building), she switches between Tamil and English, sometimes in mid-sentence, and they often invite her inside for a chat. She's with two new constituency staff members and a volunteer; together, they cantilever down the narrow hallways, knocking on doors, getting her message out ("Thanks for your support"; "Will you sign this public-transit petition?"; "Can you attend our upcoming town hall meeting?").

Before the canvass, the volunteer, Yogen, a graduate student in engineering, new to politics, asks a wide-eyed question. "My uncle wanted to know something: Why don't you wear a sari in the Parliament?"

Ms. Sitsabaiesan laughs; it is the second time the question has come up in 15 minutes. "One day, on a special occasion, I just might," she replies. "But I'll decide when."

Karim Bardeesy is a Globe and Mail editorial writer. 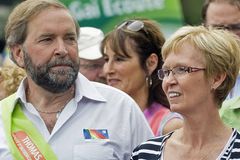 South Asian immigrants are transforming Toronto
July 3, 2011
Follow us on Twitter @globepolitics Opens in a new window
Report an error Editorial code of conduct
Due to technical reasons, we have temporarily removed commenting from our articles. We hope to have this fixed soon. Thank you for your patience. If you are looking to give feedback on our new site, please send it along to feedback@globeandmail.com. If you want to write a letter to the editor, please forward to letters@globeandmail.com.
Comments