The rising of the House of Commons this week marks the launch of the pre-election-campaign campaign: 10 weeks of intense politicking in a landscape we have never seen before, in which all three major parties are fighting a two-front war, and a common strategy is to steal what used to be another party's best line.

The tactical advantage lies with the Conservatives. Despite the NDP surge in the polls, that party enters this critical pre-writ period with an enormous encumbrance. It has only a small fraction of the money available for the pre-campaign that the Conservatives can bring to bear.

Whether it means running television ads in prime time, commissioning polls and focus groups, or supporting the ground game, the Conservatives will have more than twice as much money to spend as the NDP.

Expect the governing party to exploit all the advantages of incumbency as well, including government advertising that is really advertising for the Conservative Party and a spate of new spending announcements – Stephen Harper was in Toronto, Thursday, promising $2.6-billion for public transit – or old announcements with new paint.

Between now and the dropping of the writ, when all three parties will have the same amount to spend, the most Thomas Mulcair can do, at least in terms of the air war, is hang on.

Yet the Conservatives confront a difficult choice: Should they continue their attacks on Justin Trudeau, in an effort to further suppress the Liberal vote? Or should they turn their guns on Mr. Mulcair?

In answer, expect the Conservatives to employ a tactic traditionally used by the NDP. Mr. Harper will say that Mr. Mulcair and Mr. Trudeau are indistinguishable, taxers-and-spenders who can't be trusted on either the economy or national security. Dippers once loved to lump the Liberals and Conservatives together – Tweedledum and Tweedledee. Now it's a Tory trope.

While the Conservatives are spooked by the rise of the NDP, they aren't panicked, is how one person close to the party described the situation.

A year ago, the Conservative Party was sitting in the dark, staring at the wall with a drink in its hand, wondering how to punch back against the rock-star celebrity of Mr. Trudeau. Now it has something concrete to grapple with: the NDP platform.

So when Mr. Harper is in Atlantic Canada and Ontario, expect him to deride Mr. Trudeau as weak, inexperienced and not ready to lead. When he's in Quebec, on the Prairies and in British Columbia, the emphasis will shift to the tax hikes and deficits voters can expect under scary Mr. Mulcair.

Though the NDP is short on cash to counter the attacks, Mr. Mulcair has something equally precious: momentum.

With the NDP well ahead of the Liberals in the polls, Mr. Mulcair's message will be simple but powerful: If you want to defeat the Conservatives, the NDP is the only credible choice.

It's an argument that Liberals have been using successfully for decades against the NDP. Now the tables are turned.

And the NDP has its own advantage of incumbency, says one person close to the party: the advantage of being the official opposition, and the dominant party in Quebec.

Expect Mr. Mulcair to spend much of the summer in Quebec (he is in the Saguenay Friday and Saturday) and the Lower Mainland of British Columbia, sounding reasonable and reassuring and positively, well, conservative.

Mr. Trudeau will tour the country, promoting the depth of the Liberal bench, making key policy announcements and counting on the renewed strength of the party at the riding level, especially in places like the 905.

There will be no summer holidays for those mixed up in all this. Each week, the tempo will quicken.

And politics being what it is, nothing may be all that different by Labour Day, except that everyone will be just that much more tired.

Unless the NDP stumbles in Quebec, Trudeau cannot win
June 13, 2015 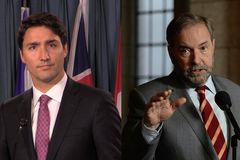