Nazanin Afshin-Jam arrives for a late lunch at an Ottawa café this week wearing a cheeky dress with a pattern of red-lipstick kisses, shiny red shoes, her long dark hair pulled artfully off her face, and her makeup picture-ready. She definitely looks the part, but don't call her a beauty queen. It's not inaccurate – she was, after all, the first runner-up in the Miss World Pageant in 2003 – it's just, well, diminishing, especially when used in headlines to announce her recent marriage to Canada's Defence Minister, Peter MacKay.

"It kills me every time I read that," she says. "That was a long time ago. There are different aspects of my life I hope that they would point to."

Here's a sampling: She's a trilingual, well-educated, second-generation Canadian success story, raised by parents who fled the revolution in Iran, and landed on their feet in Vancouver. She gave up a singing and modelling career to become an human-rights activist. And in an emergency, she could start a fire from scratch in the woods, or simply fly herself to safety. Don't express too much admiration on this latter point: "If I was a 33-year-old man with a pilot's licence, nobody would be surprised," she says, a little peevishly. "Isn't it funny that we are still not at the point where it would be just normal?"

There's no doubt that Nazanin Afshin-Jam is a valuable asset to her politically beleaguered husband, who has been dogged for months for his decision to enlist a military helicopter while on vacation to reach a political event on time. In a nation with too few women in politics, one might imagine their roles reversed: Ms. Afshin-Jam was courted by both the Conservatives and the Liberals. She turned them down. At the time, she was busy trying to free another young Iranian named Nazanin, who had been sentenced to death for stabbing and killing a man who was trying to rape her.

"I wanted to remain apolitical," Ms. Afshin-Jam says. Her successful campaign to overturn the death sentence is now the subject of The Tale of Two Nazanins, a book she wrote with Toronto journalist Susan McClelland, to be published next week, while completing an online master's degree in diplomacy at Norwich University in Vermont. (On graduation day, her father asked, "Okay, so when's the PhD?")

Her husband is mentioned only on the last page, but the book could be considered the backstory of how they met. It shifts between Ms. Afshin-Jam's privileged life in Canada and that of Nazanin Fatehi, the imprisoned 17-year-old, whose plight, thanks to her namesake, gained global attention and led to her release.

There is an underlying theme in the book that, but for her family's escape from Iran, Ms. Afshin-Jam might have found herself in a similar place, certainly forced to obey the rules of a society that, she says, treats "a woman's life as equal to half a man's." But their circumstances were quite different: Ms. Fatehi comes from a poor Kurdish family with a rigid, traditional patriarch, while Ms. Afshin-Jam's family was educated and liberal-minded. Her grandfather, a judge and former general, who later found himself on the other side of rising conservative forces in the country, had encouraged his daughter, Jalel, to choose her own religion after she stumbled on a Bible in his library; she converted from Islam, so Ms. Afshin-Jam and her sister grew up Catholics.

In the book, Ms. Afshin-Jam recounts the day she first saw the scars on her father's back, where he had been whipped before fleeing Iran. In 1979, while working as a hotel manager, he was beaten and taken into custody by the Revolutionary Guards, who accused him of playing prohibited music and allowing men and women to mingle at the hotel. Tortured in prison, he eventually secured a temporary release and escaped with his family to Spain just before Iran and Iraq declared war. A year later, the family settled in Vancouver and began to build a very different life.

Which may be why the beauty-queen label rankles so much; it belittles both her parents' expectations and her own ambitions. As a teenager, she joined the air cadets, rising to the highest rank, and earning, at 16, her pilot's licence. "You are seeing me right now – I am wearing lipstick and I'm very girly – but I have this other side to me. In the cadets, I was doing survival exercises with dirt on my face, living out in the bush for days on my own."

As for the singing career she dropped, she responds with a sheepish grin when asked about a seductive video produced with her first pop single, I Dance for You. "I wanted another platform to speak on my issues," she says of the video. "But you can't be creative, when your mind is focused on something else."

From Red Cross youth worker to walking the red carpet

Ms. Afshin-Jam learned about the other Nazanin in an e-mail she received after the Miss World pageant, a competition she defends by reciting the event's motto, "beauty with purpose." People listen more to sports stars and celebrities, she points out, and, back then, she was working as a Red Cross youth educator, "reaching 30 people at a time." The Miss World title prompted people to take her calls, and sign her global petition, when she began fighting for the life of a woman no one knew. But at the same time, she argues, "shouldn't I have the choice, if I really wanted to wear a bikini on stage? I shouldn't have another woman bashing me, especially when I come from a country where women are oppressed. Don't tell me what to wear, say or do."

It was only after Ms. Fatehi was freed in January, 2007, and Ms. Afshin-Jam began to raise the profile of similar human-rights abuses in Iran that she met Mr. MacKay, then foreign affairs minister. (In a strange twists, Belinda Stronach receives several mentions in the book; one of the first MPs to support Ms. Fatehi, she donated the last chunk of blood money that allowed her to walk free, and still works on women's causes with Ms. Afshin-Jam.) In a meeting in his Ottawa office, he gave her his card. She used the contact a few months later to help another teenager at risk of execution, and he raised the cases later with political representatives in Iran. They stayed in touch, went for dinner after she moved to Ottawa to continue her advocacy work, and soon were dating.

Last year, Mr. MacKay proposed during a cycling trip to Valentia Island in Ireland, homeland of his mother's family. Ms. Afshin-Jam is happy to set the scene: They stopped to rest on a mossy cliff, with the waves crashing below and, in the distance, a view of rugged Skellig Michael, a pyramid-shaped rock island where a monastery was built in the seventh century. "He was very poetic," she says. "It was very romantic."

They were married in January, in a small private ceremony in Mexico – selling the pictures to Hello! on condition the magazine donate $5,000 to Stop Child Executions, her charity. The location was neutral ground, she explains, as their parents – Mr. MacKay is the son of former Tory minister Elmer MacKay and his psychologist, peace activist wife Macha – were meeting for the first time.

The couple now split their time between Ottawa and New Glasgow, N.S., where she says her husband is just "Pete," and someone is always dropping off a pie at the house. But the "viciousness" of politics still upsets her, and when talk turns to the helicopter ride, she leaps to Mr. MacKay's defence: The fishing lodge where they were staying with friends was "basic," and he combined the chopper ride with a search-and-rescue demonstration. And this was their only vacation, she says fiercely, just four days. "Believe me, he would have rather stayed with me."

She says they don't agree on everything, but laughingly adds, "I'm not going to go there," when asked for an example. Starting a family is not in dispute, with her mother leading the campaign for grandchildren. "She called this morning!" she says. "If it was up to her, I'd just be married, have kids, have a quote-unquote normal life. She thinks that's happiness. But she doesn't understand happiness is for me means something different. I often have those conversations with her. Repeatedly."

Ms. Afshin-Jam continues to work on raising awareness about child executions and to start a foundation in the name of Ms. Fatehi, who since her release seems to have disappeared, their phone numbers all disconnected. (The Iranian-sections of book were based on those conversations, notes she made about her life while in prison, and interviews with lawyers who met her.) That has been a hard lesson: although efforts were made to try to get Ms. Fatehi to Canada, the Iranian woman never pursued them herself. "It's the biggest mystery," the Canadian Nazanin says. "The last time we spoke, she said she had met someone. I want to think that somebody swept her off her feet and said, 'Let's get away from all this.' But the more realistic side of me thinks that maybe she was harassed by the regime." Her biggest fear is that Ms. Fatehi has fallen victim to retribution from the family of the man she killed. (Half of her proceeds from the book will go to antiviolence programs for women.)

After lunch, she is recognized, and shakes hands with Nasrin Saba, a dentist in Ottawa's Iranian community, who says: "We're very proud of you. I follow all your work." That night, while her husband is in Parliament for a vote, she is home packing for her next trip – a women's conference in Chicago this weekend, her book launch in Toronto on Tuesday – and drafting a letter to the United Nations High Commissioner for Refugees to help a lawyer who has fled Iran after becoming a target for helping children who face execution. Hardly typical for a so-called beauty queen. 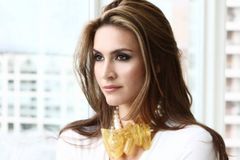