The race to replace Jim Flaherty is nearing its end, as a local mayor running for the Conservatives aims to fend off a strong push by Justin Trudeau's Liberals.

Three years ago, the federal finance minister took 58 per cent of the vote in Whitby-Oshawa, just east of Toronto in the vote-rich "905" region. Heading into Monday's by-election, however, polls show former Whitby mayor and Conservative candidate Pat Perkins has only a slim lead over Liberal Celina Caesar-Chavannes, with whom Mr. Trudeau has campaigned regularly.

A Forum Research poll released this week shows the Conservatives have a four-point lead on the Liberals, with the NDP well behind. The Liberals, with their own polling, now believe a win is possible, but still think Ms. Perkins has the inside track, sources say.

Ms. Perkins, meanwhile, is positioning herself as the experienced candidate, saying at a debate on Thursday that electing her would give Whitby "a seat at the table where decisions are being made, which absolutely no other candidate here can offer you." She earned the endorsement of Mr. Flaherty's widow, provincial MPP Christine Elliott.

But Ms. Perkins has faced her own questions. She needed, and received, special permission to run for the Conservatives because she bought her current membership only in July, and won a nomination race during which her rival complained of party interference.

She also raised eyebrows this week. Canada is on pace to badly miss its emissions-reduction targets. Ms. Perkins, when asked about it during the debate, said: "I'm sure we could find other experts who could say something to the contrary" and suggested researchers are divided on climate science. "We need some consistency of ideas from our scientists. They are at both ends of the spectrum. They haven't come together with solutions. You can't expect a politician to decide which one of these scientists is correct."

Meanwhile, one regional councillor, Joe Drumm, says he believes Ms. Perkins would not have won re-election as mayor, and questions have been raised about her record.

Her expense records show she billed the town more than $4,000 for seven nights in Cannes, France, in 2012 to attend a four-day real estate conference.

"It was an economic development thing. We've had some uptake on it but there's nothing concrete in the ground on it," Ms. Perkins said in a brief interview this week, before campaign workers intervened and told journalists she needed to leave. She was criticized at the time for not telling her council she was going.

The Liberals, meanwhile, have their own concerns. In an interview with the local Whitby This Week newspaper, Mr. Trudeau said voters there have been "spoiled" by Mr. Flaherty, because he would "stand up to Stephen Harper," a comment some Conservatives interpreted as an endorsement of the party's track record in the riding. Meanwhile, the Liberal candidate – an entrepreneur and health-care research consultant – was criticized by opponents for missing a debate.

Asked about a lack of political experience, Ms. Caesar-Chavannes said: "I have a fresh perspective. Clearly, there is much room for engagement and consultation and a person who has an evidence-based approach to policy, to legislation. And that's what I bring."

Conservatives divided with by-election underway in Flaherty’s riding
May 12, 2018 Harper to visit Whitby-Oshawa ahead of by-election call
May 12, 2018 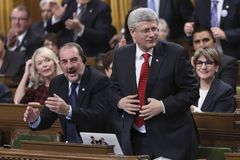 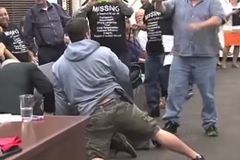