The Conservative government appointed 43 judges in June, filling appeal court vacancies left to languish as long as a year and a half and ending a shortage that contributed to backlogs in family, civil and criminal courts.

The weeks leading up to the official start of the election campaign may be the government's last chance to reshape the federally appointed judiciary, since judges are rarely chosen during a campaign.

The flood of appointments reduces the number of vacancies to 14. During the almost 10 years the Conservative government has been in power, judicial vacancies have often been at record levels, usually hovering around 50, according to figures from the Office of the Commissioner for Federal Judicial Affairs Canada.

On Manitoba's highest court, the Court of Appeal, one job was left open since Jan. 1 of last year and another unfilled since the following May; both those posts were filled in June. A Quebec Court of Appeal position had been open since Nov. 1. And Ontario had more than 20 vacancies at one point.

The Conservatives also left the Supreme Court short one judge for an unprecedented 10 months and did not fill the job of Ontario chief justice for six months.

As a result, some courts have struggled to meet the demand for access to justice. In Quebec, civil trials expected to take longer than 25 days must be booked four years in advance, Superior Court Chief Justice François Rolland said in his annual public address last September.

After complaining that one of the vacancies on his court went back a year and another four positions had been open for six months, he jokingly asked if anyone could get Justice Minister Peter MacKay on the phone, because he had tried and failed. He has since retired.

"The vacancies that sit there represent a judge that could be and should be available to the public," said Michele Hollins, president of the Canadian Bar Association, adding that the CBA had repeatedly urged the government to fill the jobs. In her home province of Alberta, the shortage of judges has led to serious delays in family, civil and criminal cases, she said.

The Justice Minister's office did not respond directly when asked why it had decided now to fill jobs left open for so long. Clarissa Lamb, a spokesperson for Mr. MacKay, said in an e-mail: "Judges are appointed based on merit and legal excellence and on recommendations made by the 17 judicial advisory committees across Canada. We work with our provincial counterparts to ensure they have the resources they need to administer the justice system more efficiently and effectively for Canadians."

Leaving the judiciary with chronically high numbers of unfilled jobs is just one aspect of this government's troubled relationship with the courts.

While some legal observers have wondered whether Ottawa was simply trying to save money – Superior Court judges earn $288,100 a year, plus benefits – those close to judicial appointments say the government took great pains to ensure that few liberal-minded candidates made it through, slowing the process.

The government has seen judges strike down its crime laws or make refugee rulings it disliked, and cabinet ministers have responded at times with vociferous public criticism.

Judicial appointments are a big part of Prime Minister Stephen Harper's legacy, according to Wayne MacKay of the Schulich School of Law at Halifax's Dalhousie University. The federal government appoints judges to provincial superior and appeal courts, the Federal Court and the Tax Court, as well as the Supreme Court.

"He's had more impact [than at the Supreme Court] installing judges with a small-c conservative, more restrained judicial temperament he's looking for – one that's more supportive of the government and less inclined to take an activist view of the Charter of Rights," Prof. MacKay said in an interview.

More than half of newly-appointed judges are women
May 15, 2018 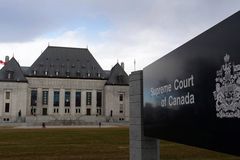 Mandatory minimum sentences: effective or unfair?
June 19, 2017
Follow Sean Fine on Twitter @seanfineglobe
Report an error Editorial code of conduct
Due to technical reasons, we have temporarily removed commenting from our articles. We hope to have this fixed soon. Thank you for your patience. If you are looking to give feedback on our new site, please send it along to feedback@globeandmail.com. If you want to write a letter to the editor, please forward to letters@globeandmail.com.
Comments